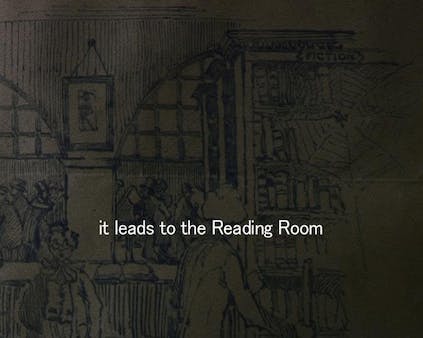 Elizabeth Price’s video A Public Lecture & Exhumation (video 25 min.) takes as its subject the Bequest of Alexander Chalmers, a moribund public collection of art, established in 1927, obsolete by 1979.

The Public Lecture of the title is delivered in the ‘voice’ of the former Committee, who were responsible for managing the Chalmers Bequest during its era of activity. This Public Libraries Committee existed between 1893 and 1969, at which point the Metropolitan Council under which it acted was rendered defunct. Redundant since that moment, the former Committee of the film speaks as an Administrative Spectre.

The Committee begins the Public Lecture by setting the scene for the Exhumation: they present the public buildings and civic institutions of the Metropolitan Council, effecting a restitution of their municipal jurisdiction. Once this geography is established, they begin to move through its interior spaces. Slowly, and with absurd and authoritarian aplomb, they uncover and reveal evidence of the moribund Bequest.

The video is initially structured using the model of the lecture, its visualization derived from pedagogic uses of technology such as slide shows and ‘Powerpoint’ presentations; as well as public information broadcasts. These didactic vernaculars are used to establish a context of Institutional Authority and Government. However, the Exhumation which is implied through the narrative does not restore the order of paternal law and inheritance. Rather, it invokes the undead of supernatural fictions and zombie films and the Lecture itself gives way to a romance.

A Public Lecture & Exhumation is the final phase of a six-year project, in which Price has enacted every clause of Alexander Chalmers’ Will & Bequest (1927), originally entrusted to the Public Libraries Committee. Her action in so doing temporarily revived this former Committee to an administrative half-life, and corrupted the extant body of historical materials relating to the Chalmers Bequest, with disordering additions. This history is the preface to the film’s action.