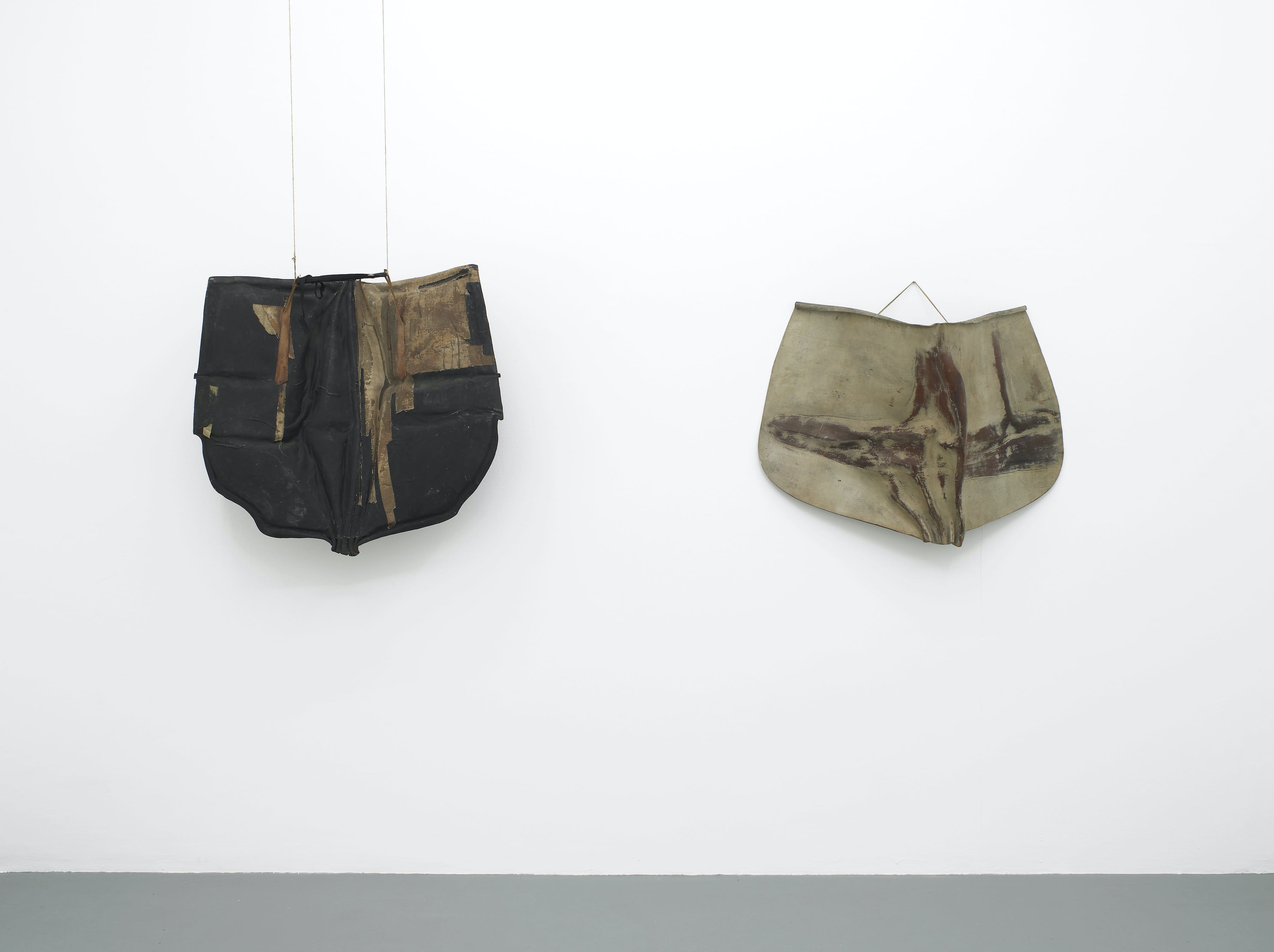 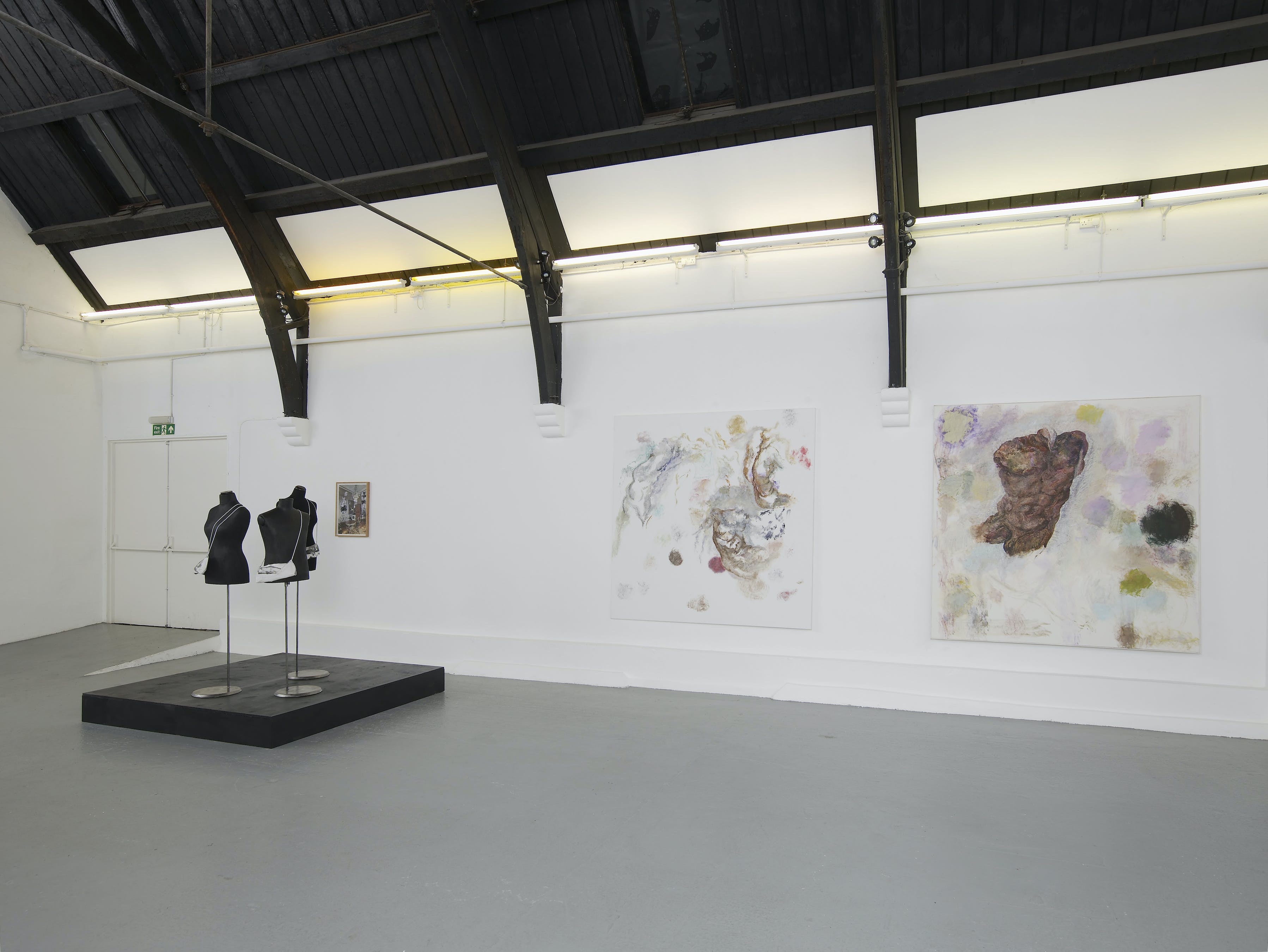 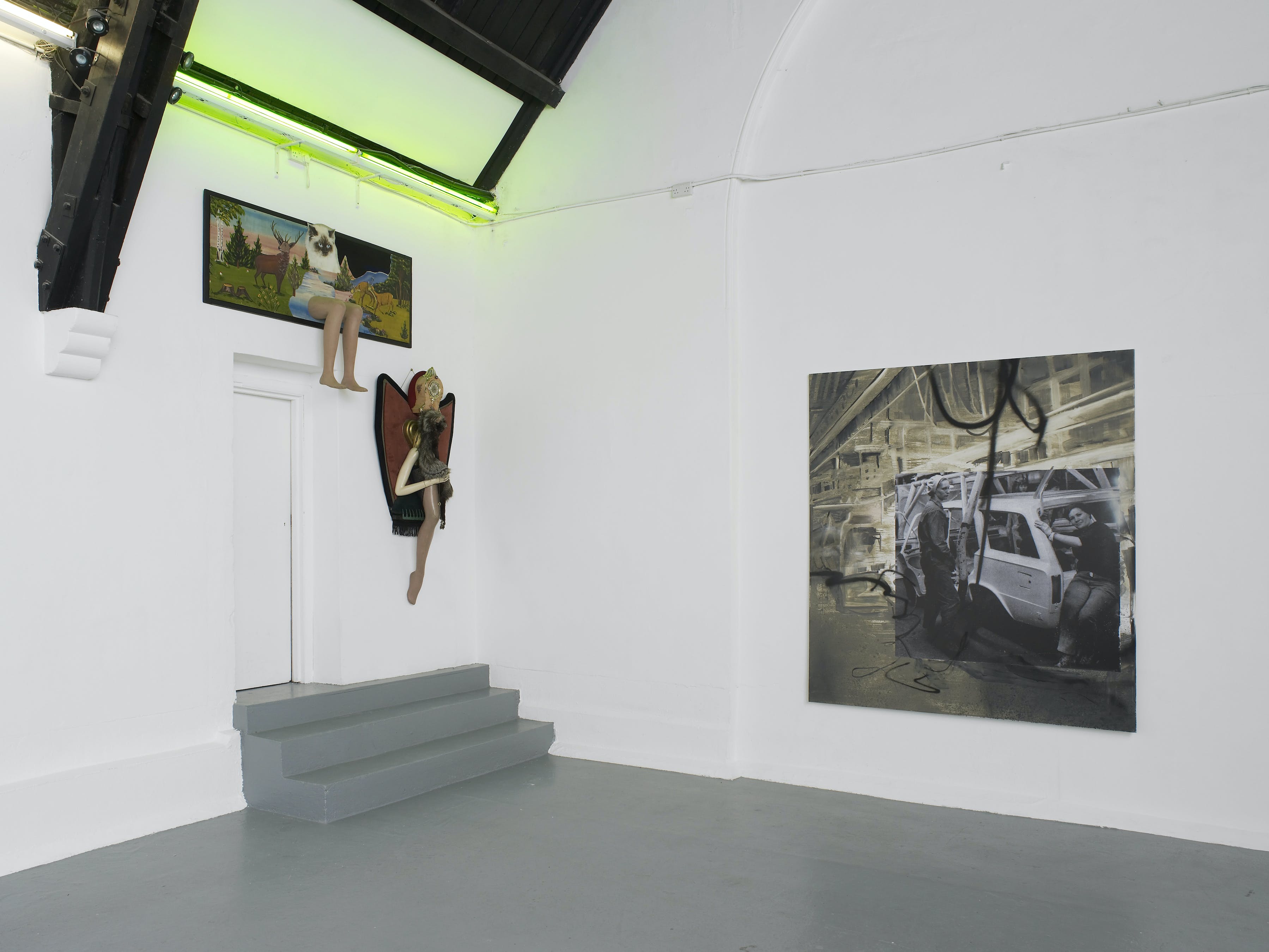 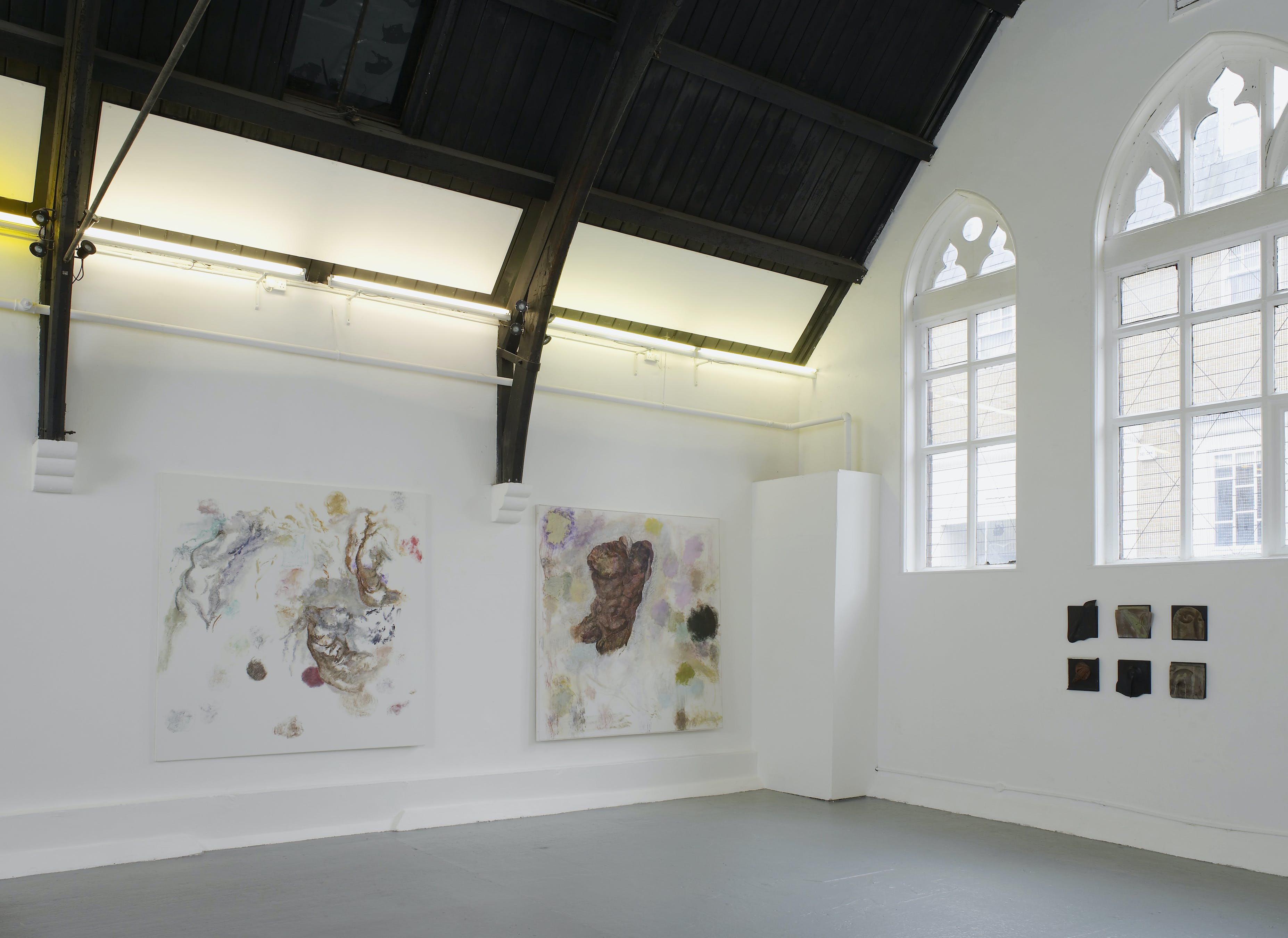 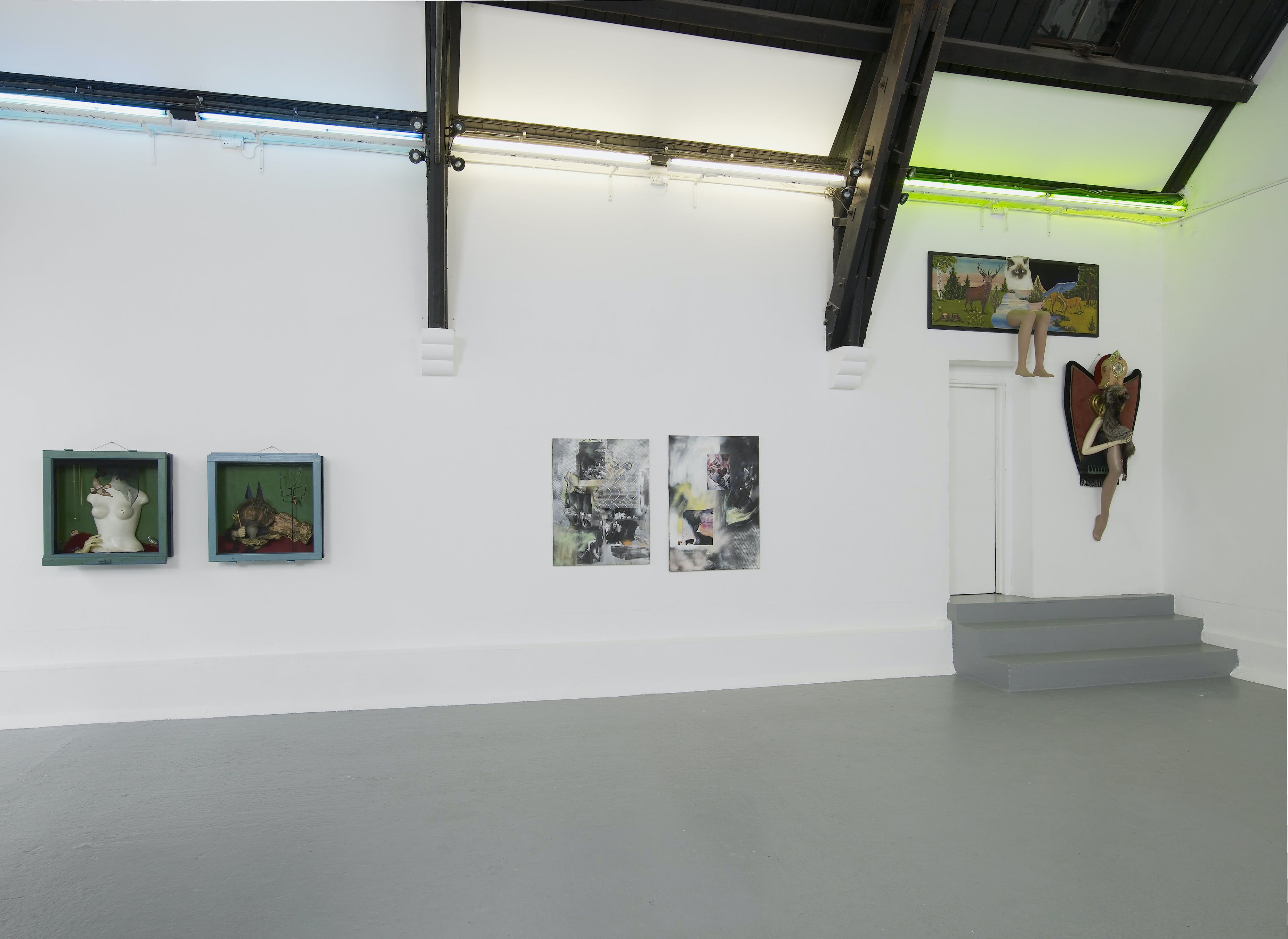 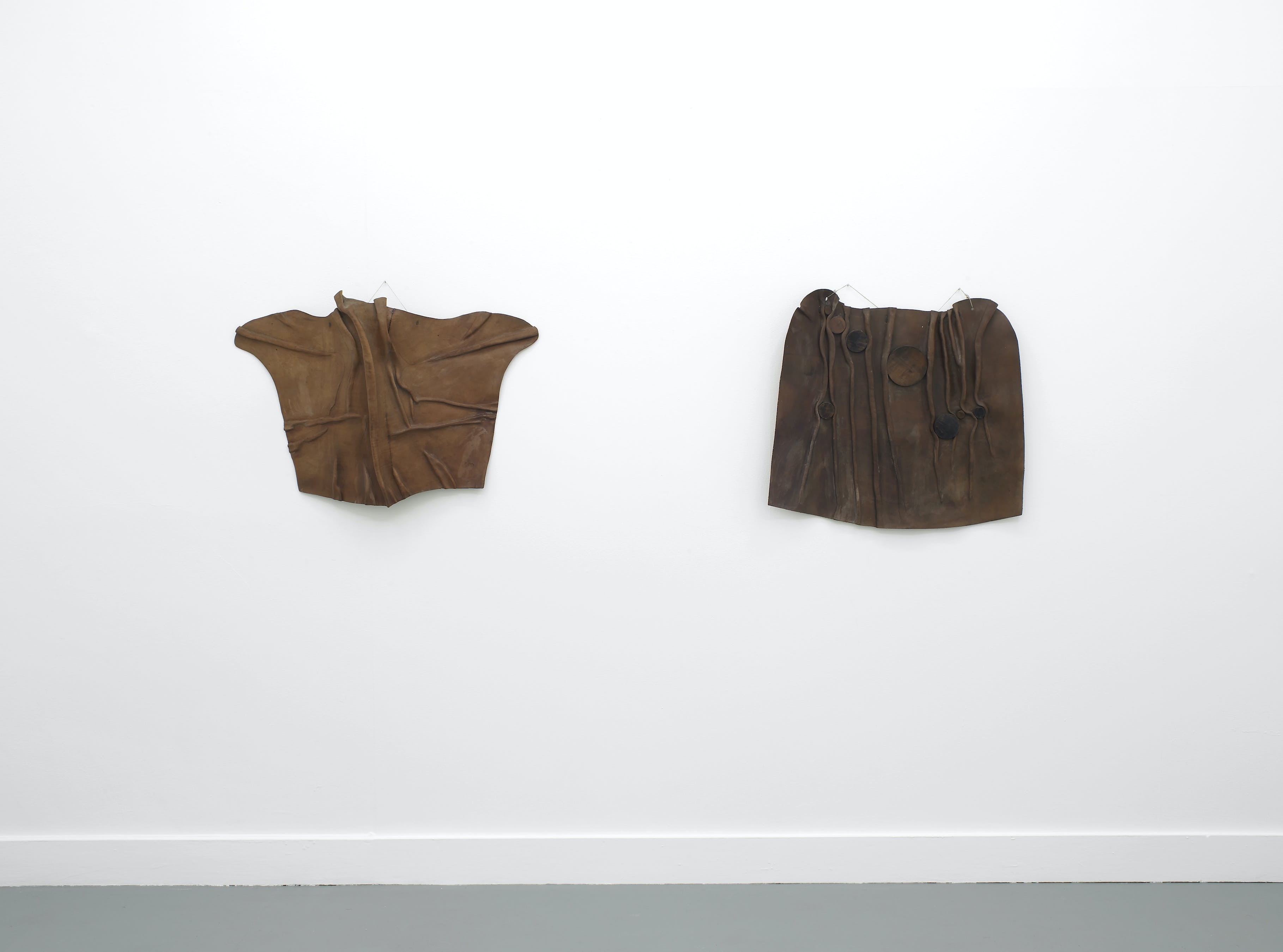 Studio Voltaire presents The Method, an exhibition devised by Paulina Olowska including works by Władysław Hasior, Matthias Schaufler and Włodzimierz Wieczorkiewicz. A new body of works was produced by Olowska as a response to the other artist’s work.

Three large paintings by Matthias Schaufler depict ghostly torsos in abstract landscapes. While being aware of the sculptural form of the body and its physical weight, there is a sense of otherworldliness to how the figures float, apparition-like. The titles of Schaufler’s works often refer to a narrative, to a particular Greek myth or religious text. The paintings may be read as a metaphysical critique, thinking through how the body exists within the world. The figures occupy their own space and could be understood as acting autonomously, in a sense this state of autonomy become a metonym for artistic practice itself.

This idea of a figure occupying its own territory is explored in Hasior’s work Uzurpator/Usurper (circa 1970); a lion-like figure resides over his own space and makes his own rules. Hasior’s assemblages of various found objects and materials have been described as an obscure provincial variety of Pop Art mixed with Arte Povera – consider his use of kitsch/consumerist objects alongside more native materials and customs. The resulting practice remains difficult to name and is quite distant to the academic sculptural traditions of the time, it links more to the vernacular traditions of making devotional objects in Podhale, the region of Poland where he lived. Cult and pagan symbolism runs throughout the works. The assemblages in the show are lent from Tatra Museum, Zakopane, the permanent home of his studio/gallery – a particular environment he created for the display of his works.

Wieczorkiewicz’s practice is rooted in both handicraft and modernist traditions, utilising traditional craft skills to create formal compositions. His extensive practice in the Applied Arts spanned fashion items, set design, metal and leather works. Often placed within Polish and German middle-class homes, these crafted works offered an alternative to the standardised objects most commonly available in the Eastern Block. Although primarily an exploration of form and material, the works reference particular signs and symbols found in objects such as shields and totems. In a chapel space similar to Studio Voltaire, Wieczorkiewicz established The Sulmin Gallery in a village near to Gdansk in the late 1970s to display his works, as well as hosting occasional events and exhibitions of other artists. In 2005 the gallery burnt down, leaving just a few works of Wieczorkiewicz left.

The title of the exhibition – The Method – comes from both Studio Voltaire’s gallery space being a former Methodist church and the idea of the method of production/working method. There is a sense with all the artists selected by Olowska that their practices sit outside current modes of production, that either the work could be considered outdated, unfashionable or culturally redundant. This exhibition aims to provide a platform in which the works can be reconsidered within current forms of cultural production. Production also features as subject matter in Olowska’s paintings and collages, note the inclusion of factories and workers as well images of other artist’s work. Car factory labourers become producers of abstract sculpture objects, while other paintings attempt to capture a moment of energy in making and creativity.

With thanks to Muzeum Tatrzanskie. 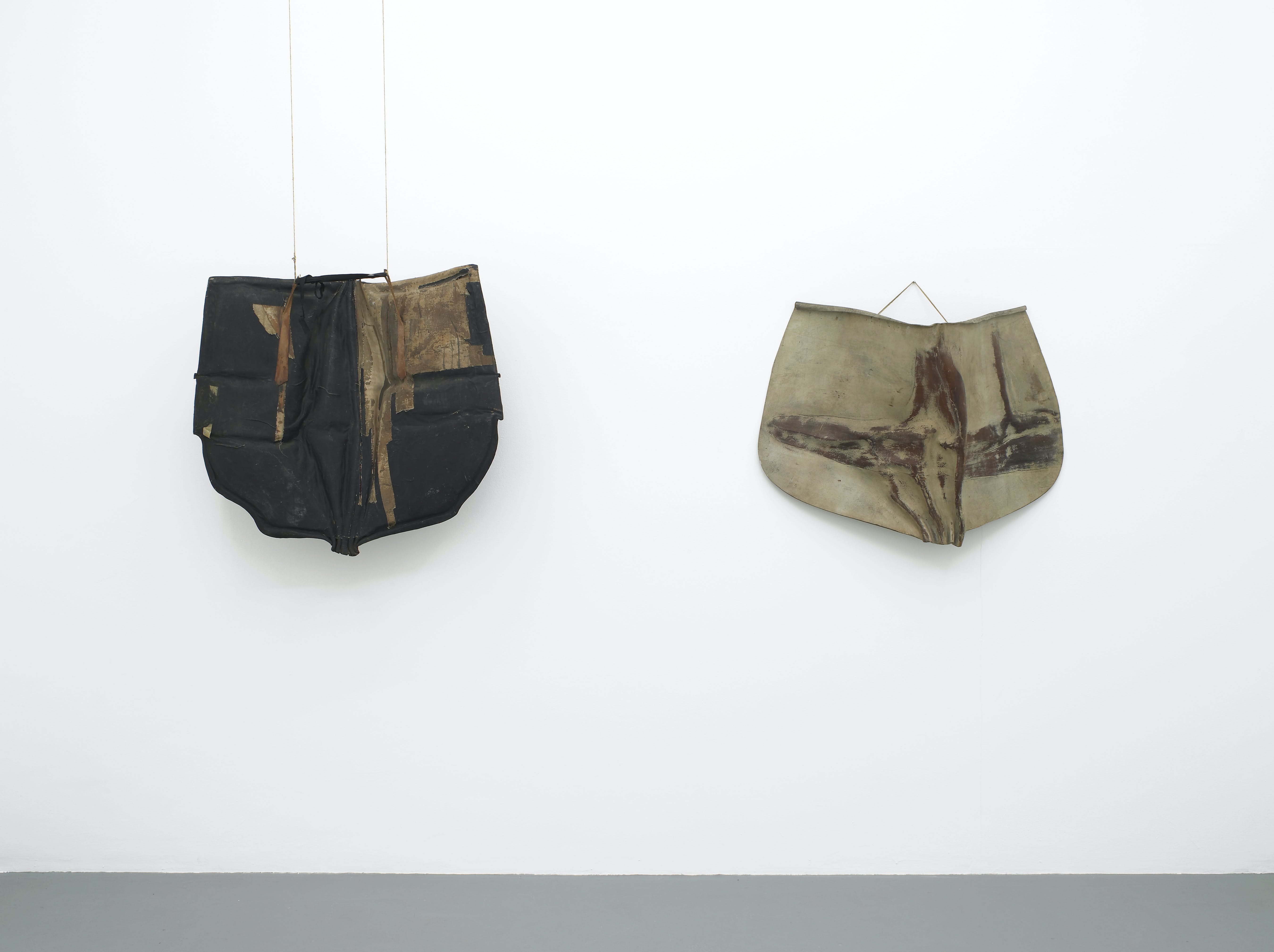