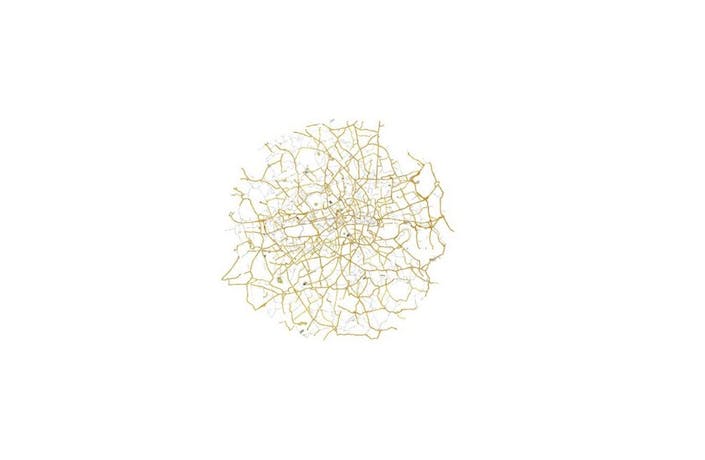 A collaboration between artist Beatrice Gibson and composer/musician Jamie McCarthy, ‘if the route’: the great learning of london [a taxi opera] is a live performance piece and radio work in seven parts based on the tradition of ‘calling over’ in The Knowledge (the infamous London cabbie navigation system and mnemonic device).

A complex and fascinating mathematics of the everyday, The Knowledge involves learning 320 routes or runs mapped within a six-mile radius of Charing Cross. On completing the knowledge a total of 26,00 miles will have been travelled and a total of 30,000 streets memorized as a networked configuration in the mind.

‘Calling over’ asked students to call out the days run[s], reciting them out loud. Partners form to call over runs to one another, using recital and repetition in preparation for ‘appearances’ [tests] at the Public Carriage Office. Knowledge Point on Caledonian road, one of several taxi universities students may attend whose curriculum includes a series of mnemonic devices to aid learning, is filled with pairs of men and increasingly the odd woman aurally reciting sets of directions to one another. Entering it is to be surrounded by the city fragmented into sets of sentences and street names; a veritable symphony, performing the city as text.

Using calling over as the principle sound source for the piece and working collaboratively with taxi drivers from Knowledge Point, the performance of The Great Learning celebrates and elaborates this formidable everyday system and poetically re-contextualizes it within in the space of the gallery.

The Great Learning plays on the title of the influential score of the same name by the radical 1960’s composer and musician Cornelius Cardew. Cardew’s work was rooted in a belief in the democratic potential of music as a social platform. His version of The Great Learning was a score in seven paragraphs, rooted in, and acoustically generated by, the Confucian text of the same name. In keeping with and paying homage to the spirit of Cardew’s original score and the political gesture of experimental composition, Gibson and McCarthy have used both aural and non-aural elements of research into The Knowledge in their composition. The score for the piece has been developed for musicians and non-musicians alike, providing a basis for the realisation of both live performance and radio works. Seven practitioners from differing fields have been invited to use and translate the score, participants include: architect Celine Condorelli, artist Beatrice Gibson, musician and composer Kaffe Matthews, composer/musician Jamie McCarthy, artist and writer, Tom McCarthy, taxi driver, Simon Phillips, and architect and theorist, Eyal Weizman.