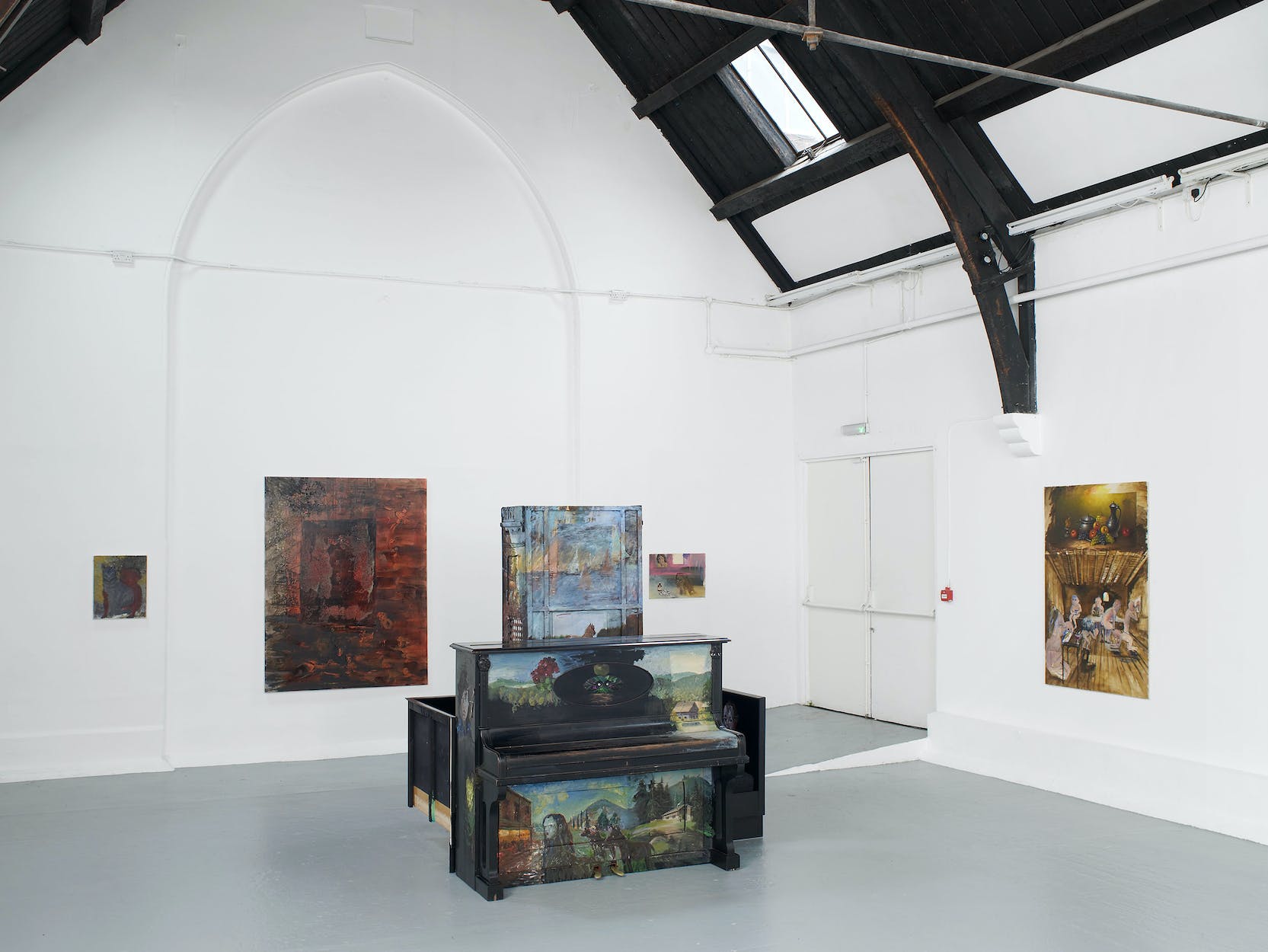 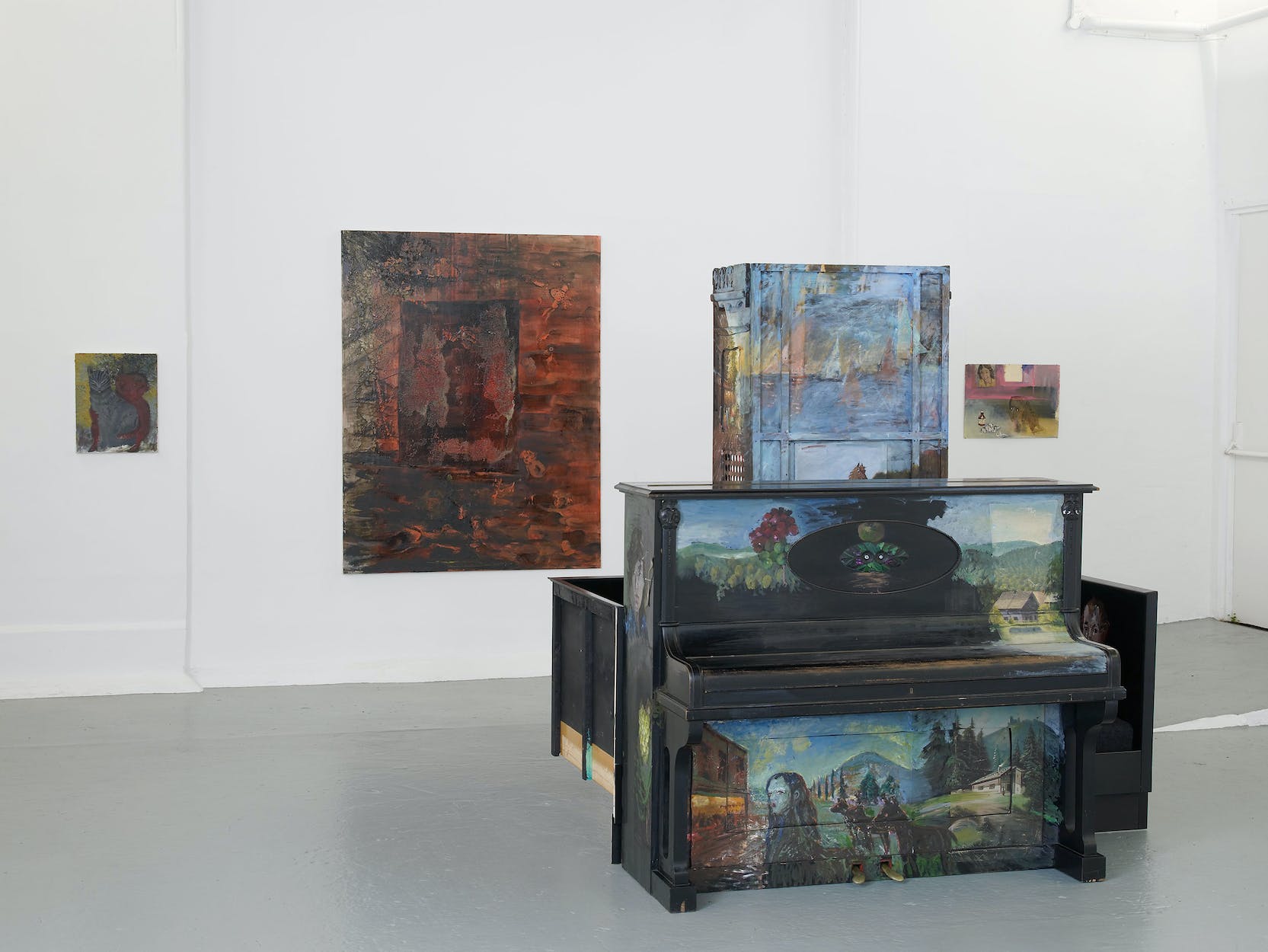 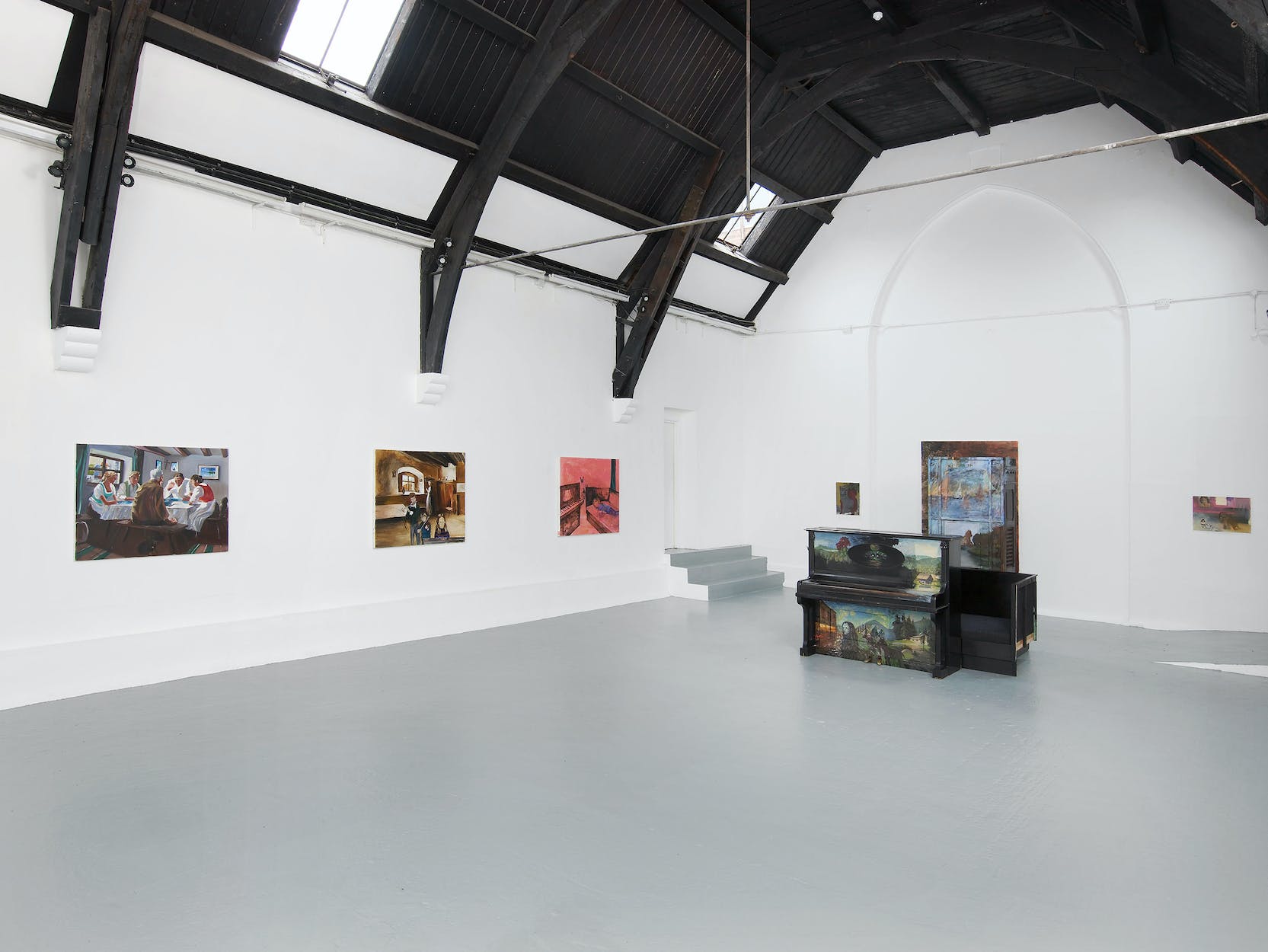 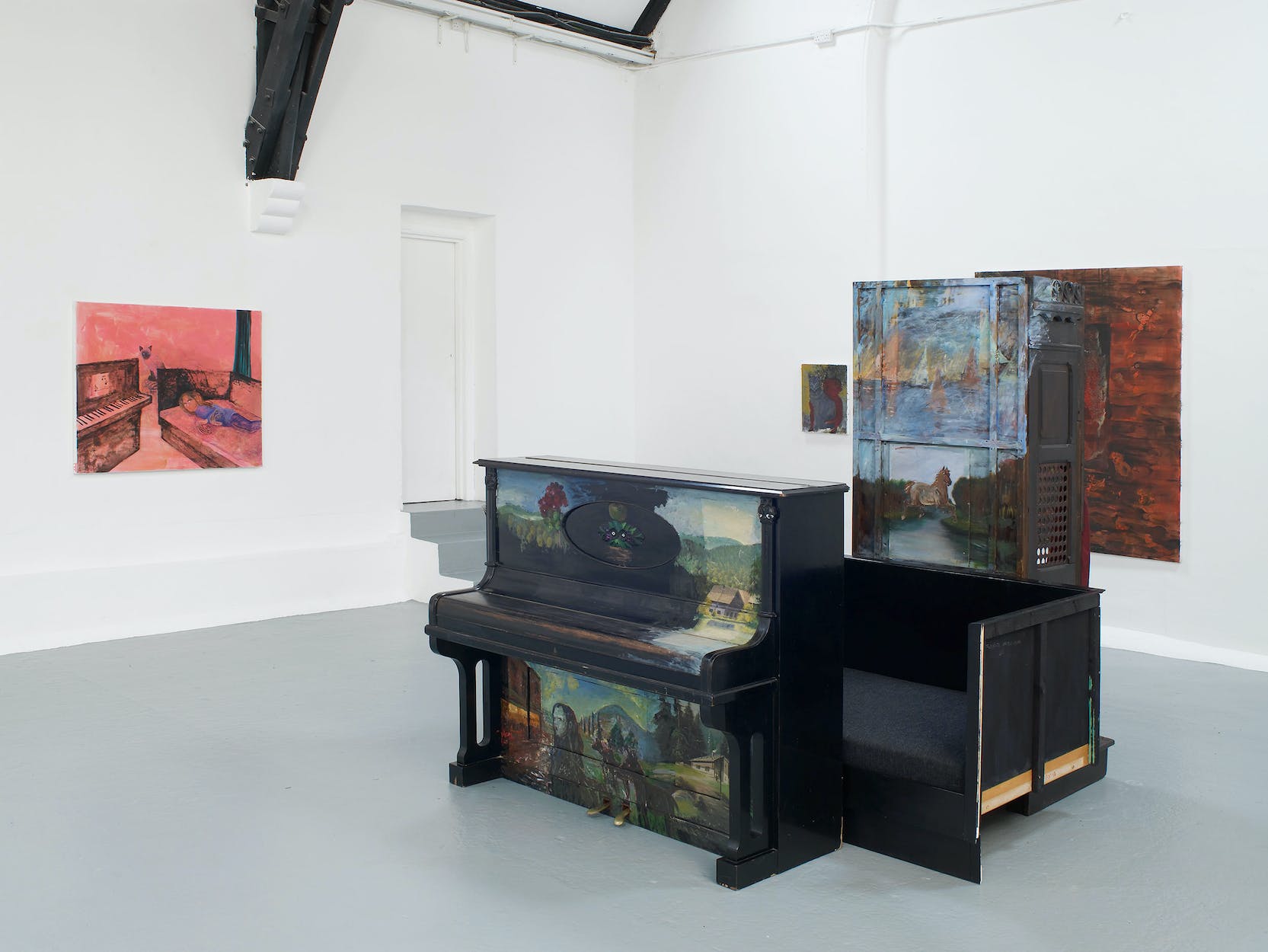 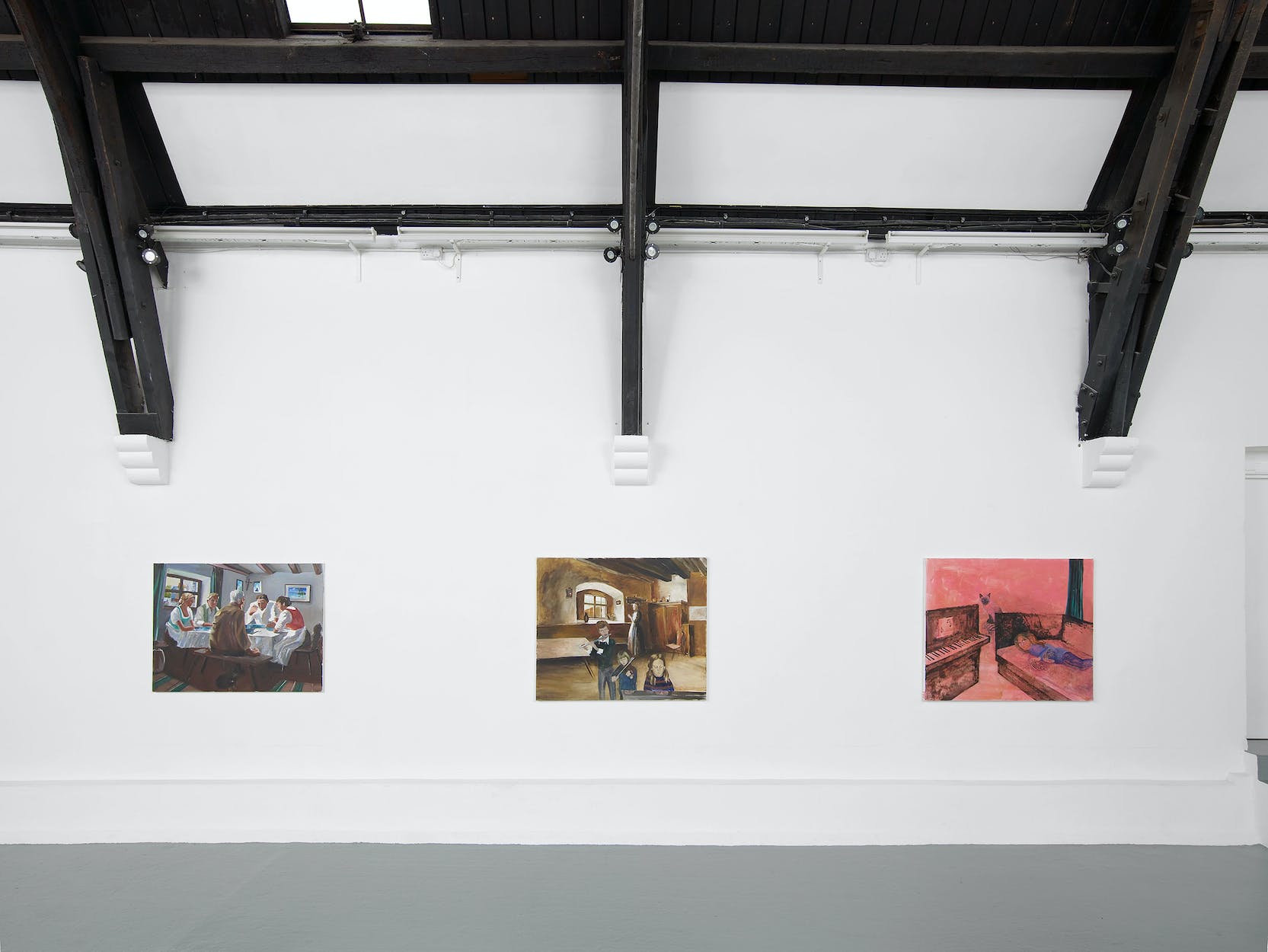 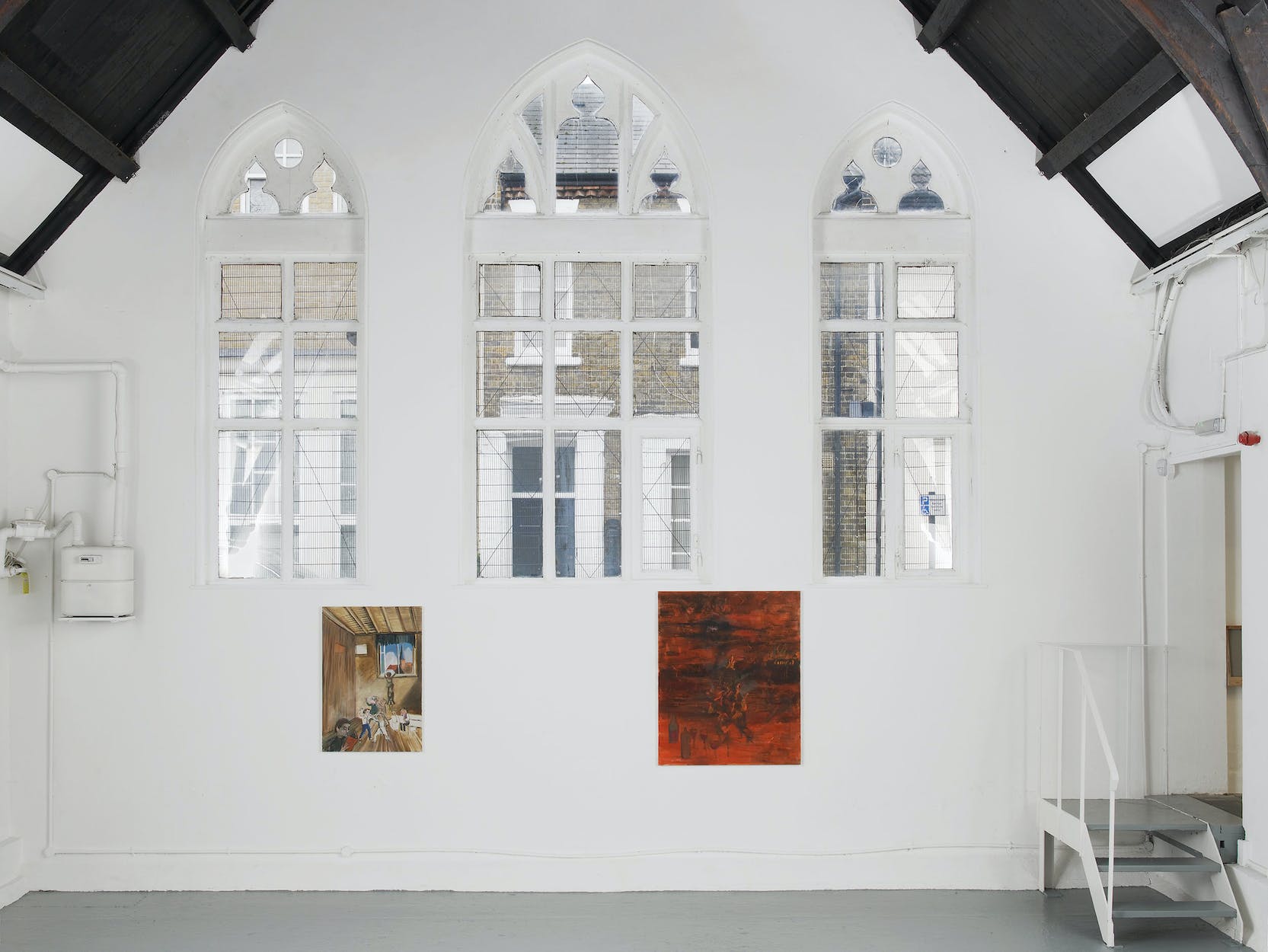 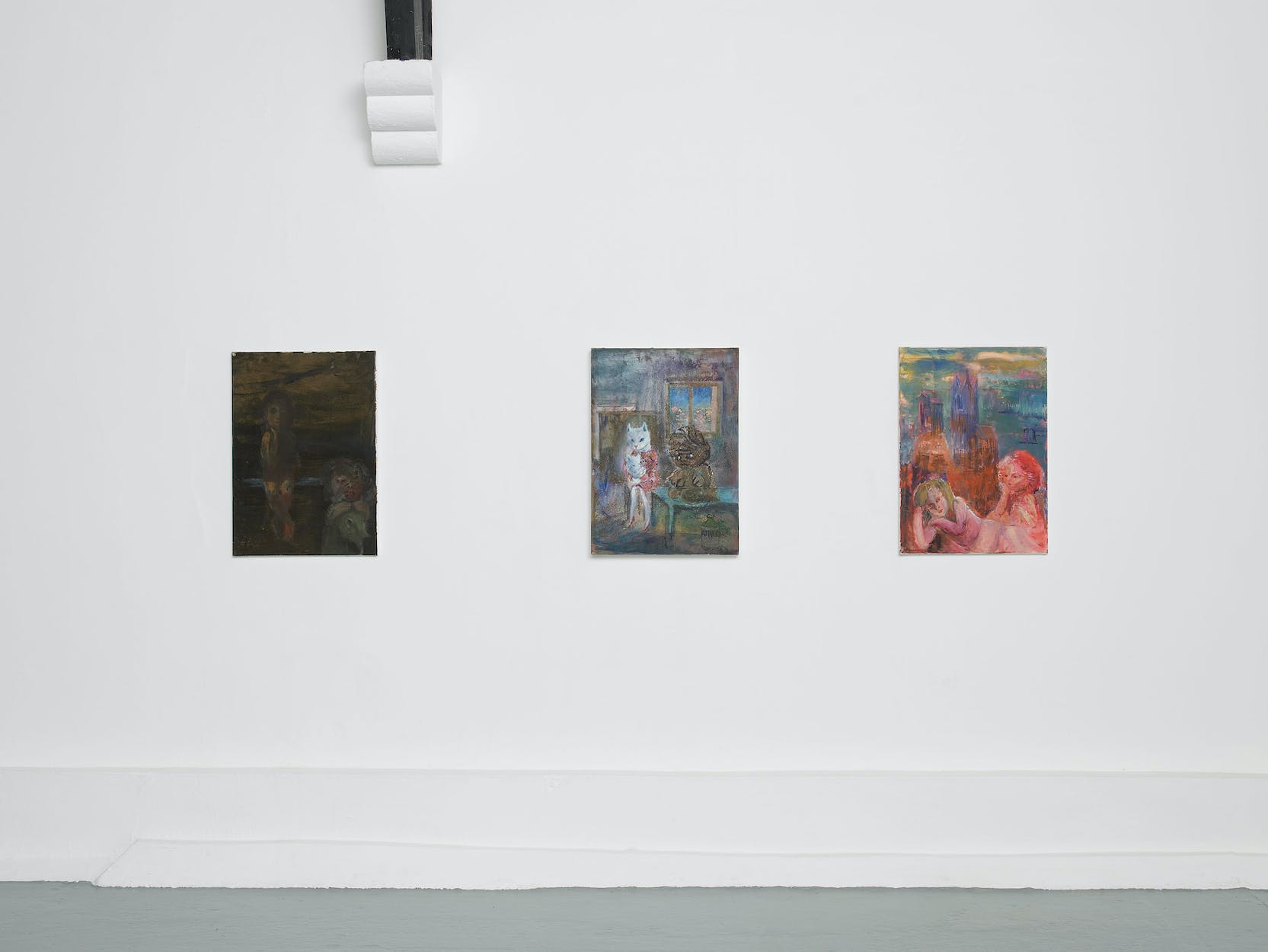 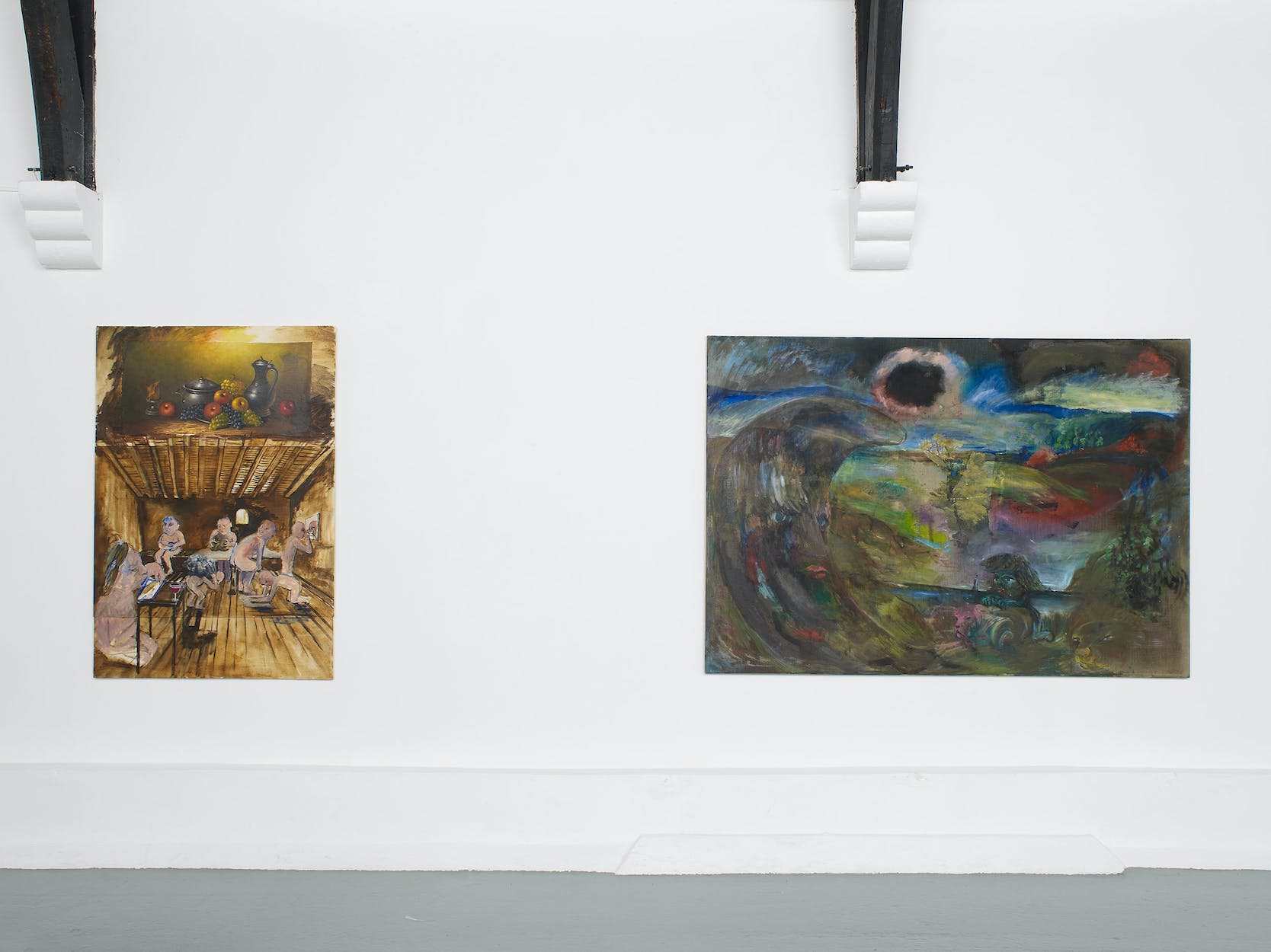 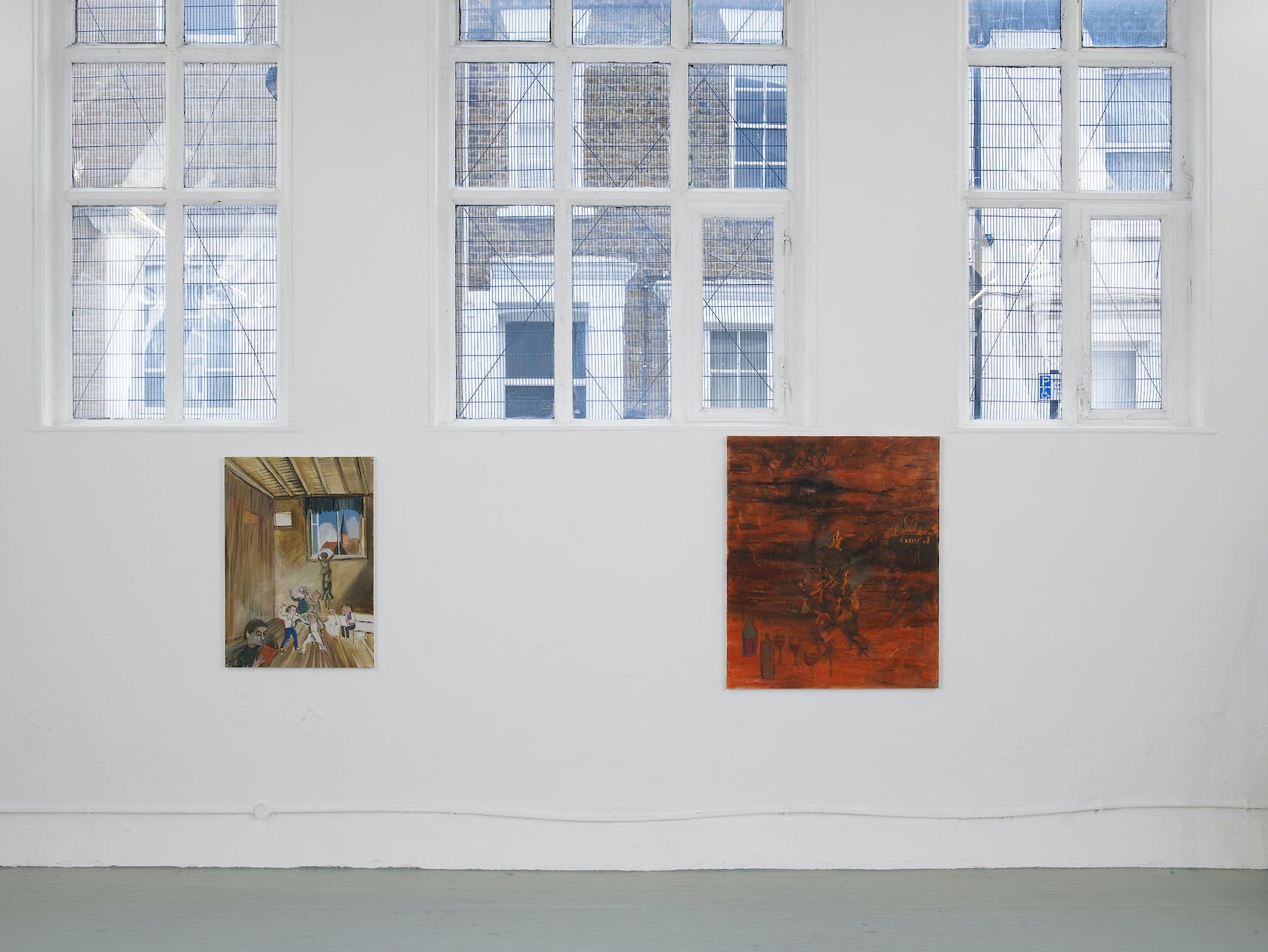 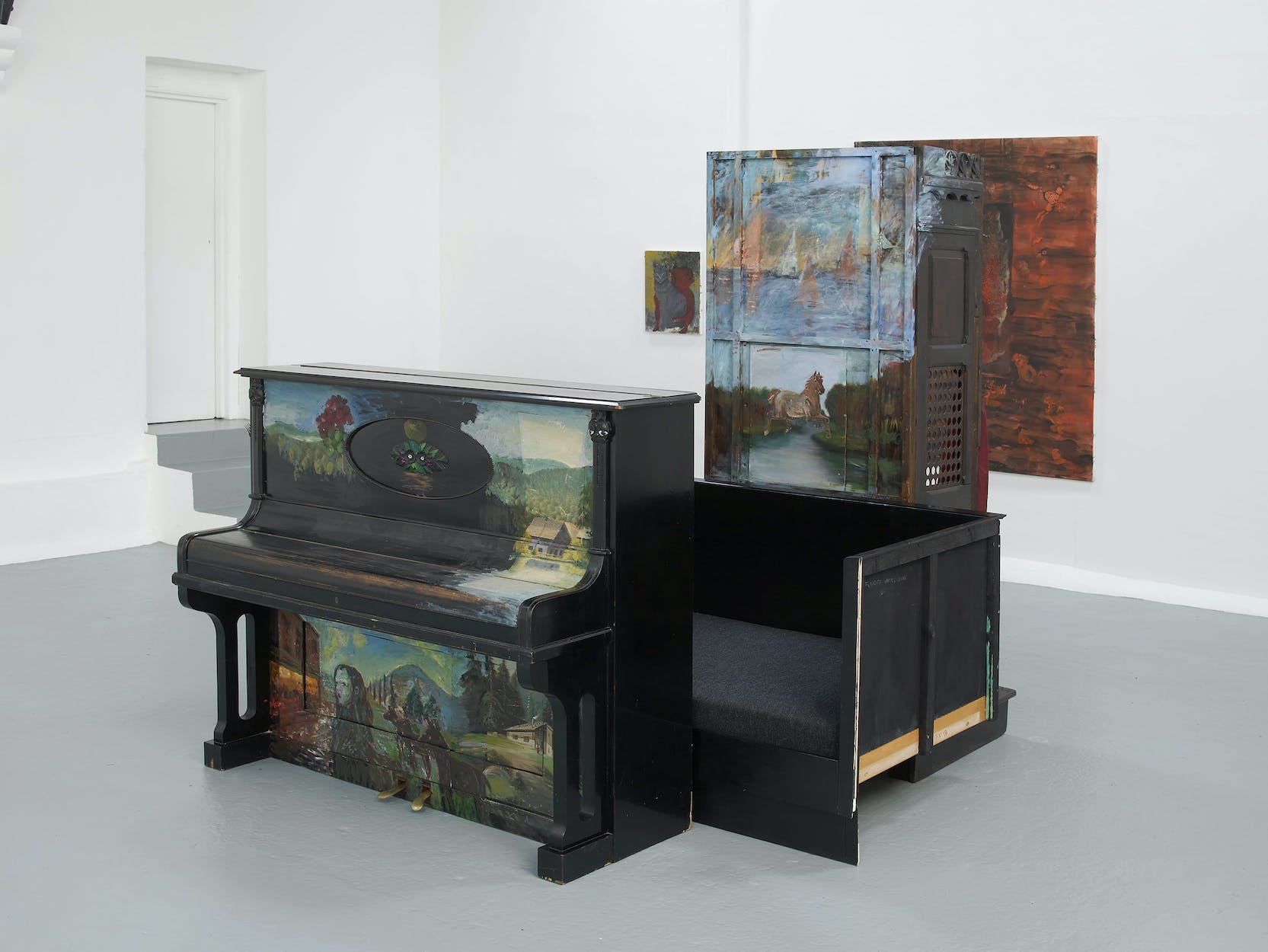 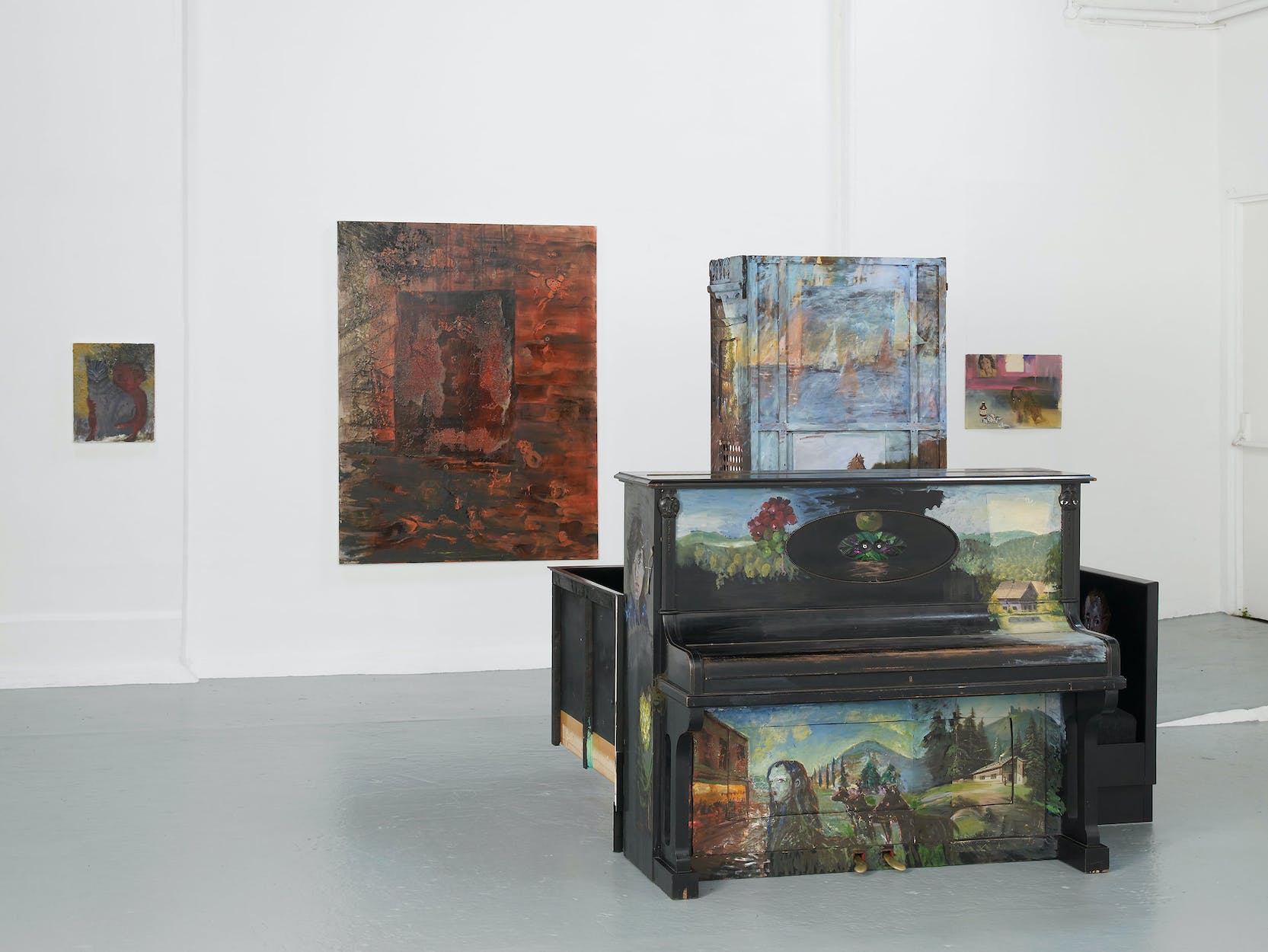 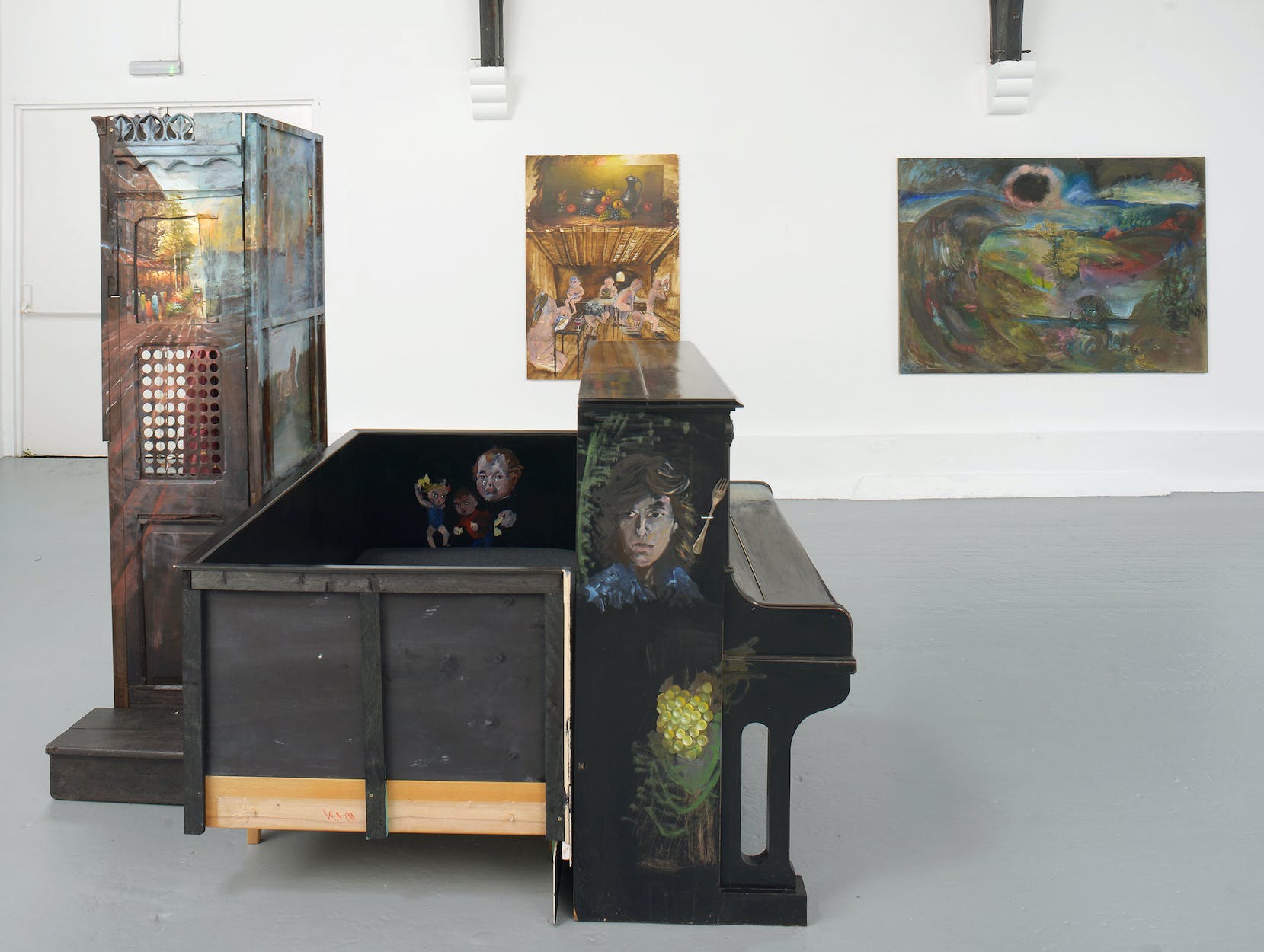 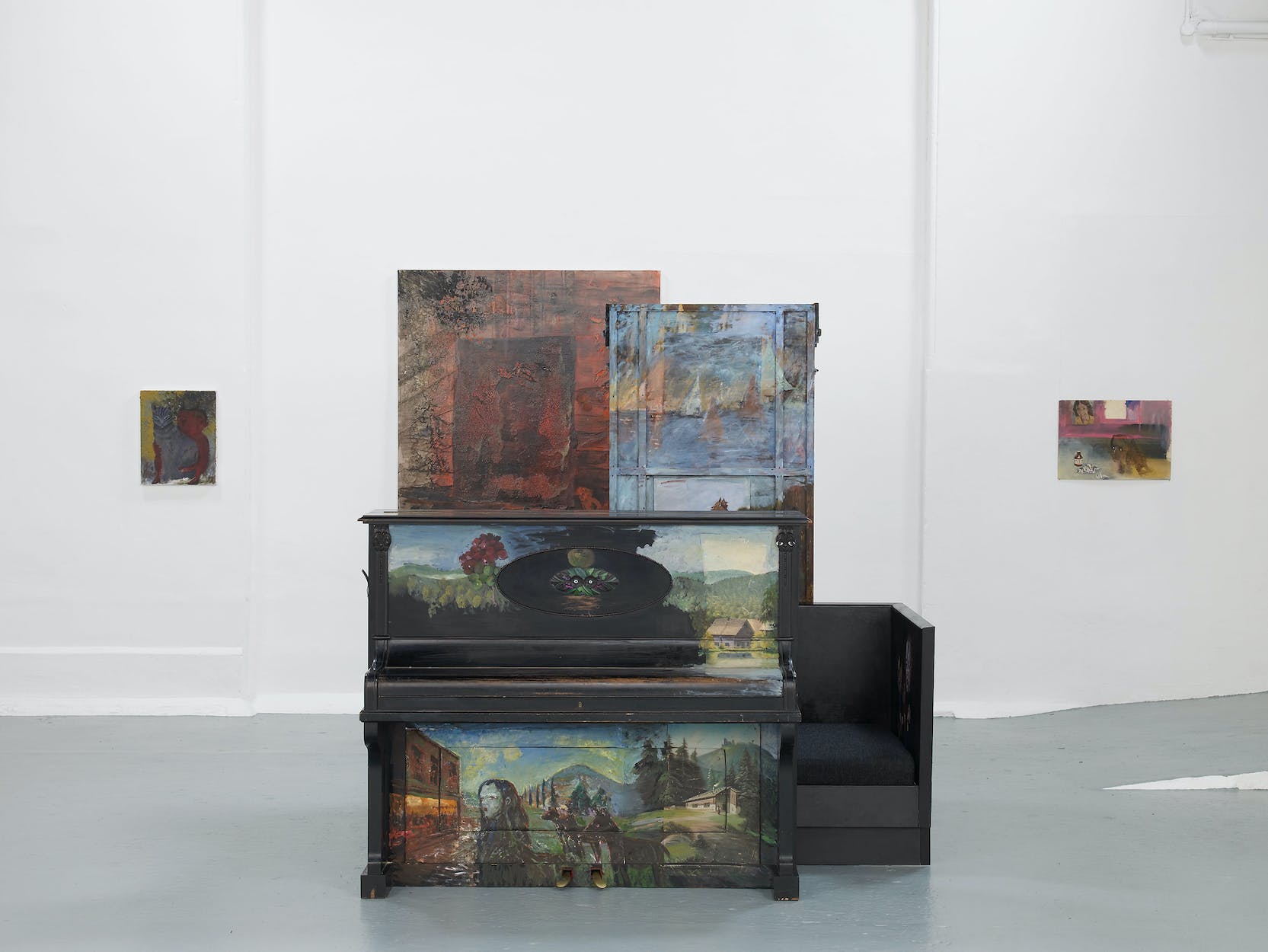 The misjudged Bimpfi was a major new commission by German artist Amelie von Wulffen, her first solo exhibition in the UK.

For this commission at Studio Voltaire, von Wulffen presented a significant body of work that combines her interest in guilt and the unconscious. In new paintings, von Wulffen has blended traditional figuration with disconcerting scenarios in which differing styles of dress, location and painterly convention are folded in on one another in ludic juxtapositions. Von Wulffen frequently references historical genre painters, as in the peasant scenes of Austrian artist Franz von Defregger, whose works were later co–opted by National Socialists. Equally, she cites the shadowy images of Symbolist Alfred Kubin, and makes use of the styles and techniques of applied arts such as Bauernmalerei. Found works by ‘no–name’ artists are pasted directly onto canvases, combined with tromp l’oeil and heavy impasto, kitschy images of fruit bowls and kittens, or reproductions of pleasant farmsteads.

The content and subjects of von Wulffen’s works suggest an innate affinity with ‘the outsider’ or marginalised figures. The exhibition’s titular “misjudged Bimpfi” references a German–language children’s book in which the protagonist, an anthropomorphised mushroom, is unjustly shunned when accused of crimes he did not commit. Questions of fault, estrangement and exclusion weave throughout the exhibition, but are particularly inscribed in an imposing painted sculpture formed from elements of a Catholic confessional, a built–in–bed and a piano. Von Wulffen places these disparate objects in uncomfortable proximity, their close quarters reminiscent of piled up stacks of wooden furniture in provincial auction houses, antique shops or ‘spare’ rooms. The sculpture forms an ‘inhospitable cabin’. However a miscellanea of motifs, from romantic Parisian bars to leaping horses and late–70s sitcom stars have been hand–painted onto its surfaces, redolent of cheaply framed replicas in stuffy sitting rooms, images found within storybooks or those pasted onto the walls of a teenager’s bedroom. The gesture is decorative and yet anarchic. Von Wulffen’s images suggest a young girl as the potential inhabitant of this shelter, but any perceived refuge from societal expectation can only be precarious, as the highly coded architectures of the structure – church, home and class – close in around her.

Von Wulffen’s works often disclose a generational experience of growing up in Germany, and explicitly, a climate of blame and restraint that lingered beyond the post-war period and into the 1970–80s, during the artist’s own adolescence. Though the confessional promises absolution in exchange for acts of penance, importantly for the artist it also introduces the idea of guilt in early life. The uncanny, enclosed isolation of the sculpture is reiterated across the dark interiors of the paintings. These paintings repeatedly return to depictions of childhood and children, but often picture them as transgressive agents. The children are painted in tears, raising their arms in pugilistic stances, poisoning cats, shredding yellow butterflies or transformed into gnome-like creatures – expelling suppressed anxieties in fantastical and grotesque forms.

This commission was generously supported by The Elephant Trust, Institut für Auslandsbeziehungen, and The Amelie von Wulffen Supporters Circle.