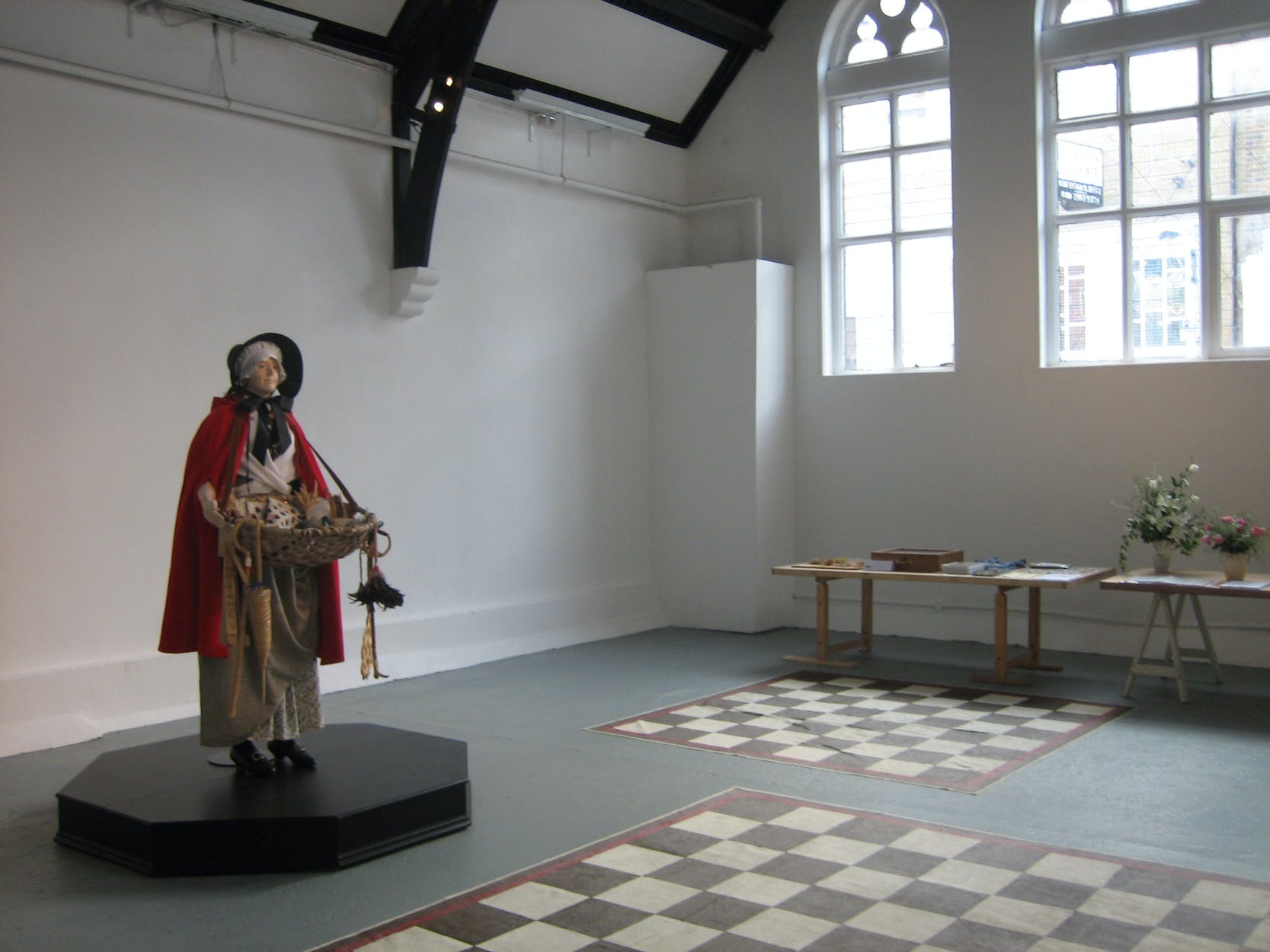 For Notion Nanny at Studio Voltaire, Allison Smith stopped off on her ongoing journey around the UK in search of traditional craft skills and dialogue on revolutionary art practice.

Across country lanes and urban cross-roads, an itinerant apprentice offers ideas and articles both traditional and revolutionary, the abundantly crafted is offered in exchange for skillful demonstrations and good company.

The project took a peddler doll–or ‘Notion Nanny’–as its focal point, this figure was fashioned in Smith’s own image and stood to scale. Based on the traditional peddler doll figure, popularly displayed in British households during the Victorian era, the ‘Notion Nanny’ was dressed in a traditional red cloak and held a basket overflowing with miniature wares. The peddler doll commemorated the disappearing social custom of traders travelling the countryside, their baskets containing a tiny world of eighteenth-century material culture; ceramics, tinware, printmaking and needlework are all on offer.

Like nineteenth-century porcelain dolls, Smith’s peddler doll had ceramic limbs (made at atelier in France), glass eyes and a hand-stitched wig. Her costume was made in London with Jane Smith and other historical costume designers. Over the course of the project, the doll’s basket was filled with wares made by Smith in collaboration with artisans and craftspeople that she encountered at each location.

As the re-imagined personification of a typical village character, Notion Nanny tells the anthropological folktale of the contemporary artist, ‘post studio’, peddling ideas and objects as well as crossing borders and provoking dialogue. Questioning the contemporary phenomenon of artists travelling between international art fairs and biennials, Smith’s basket offers an antidote to the notion of the exhibition and the role of the artist as ‘exhibitor at the fair’. In Notion Nanny, the peddler doll serves as a mobile cornucopia, a museum herself and a repository for production and exchange.

Notion Nanny travelled from Grasmere, Cumbria in August 2005 and will be moving on to Oswestry, Shropshire in Spring 2006 in association with Craftspace Touring. B+B was an independent curatorial partnership of Sarah Carrington and Sophie Hope.

Supported by Arts Council England and The Jerwood Charity.