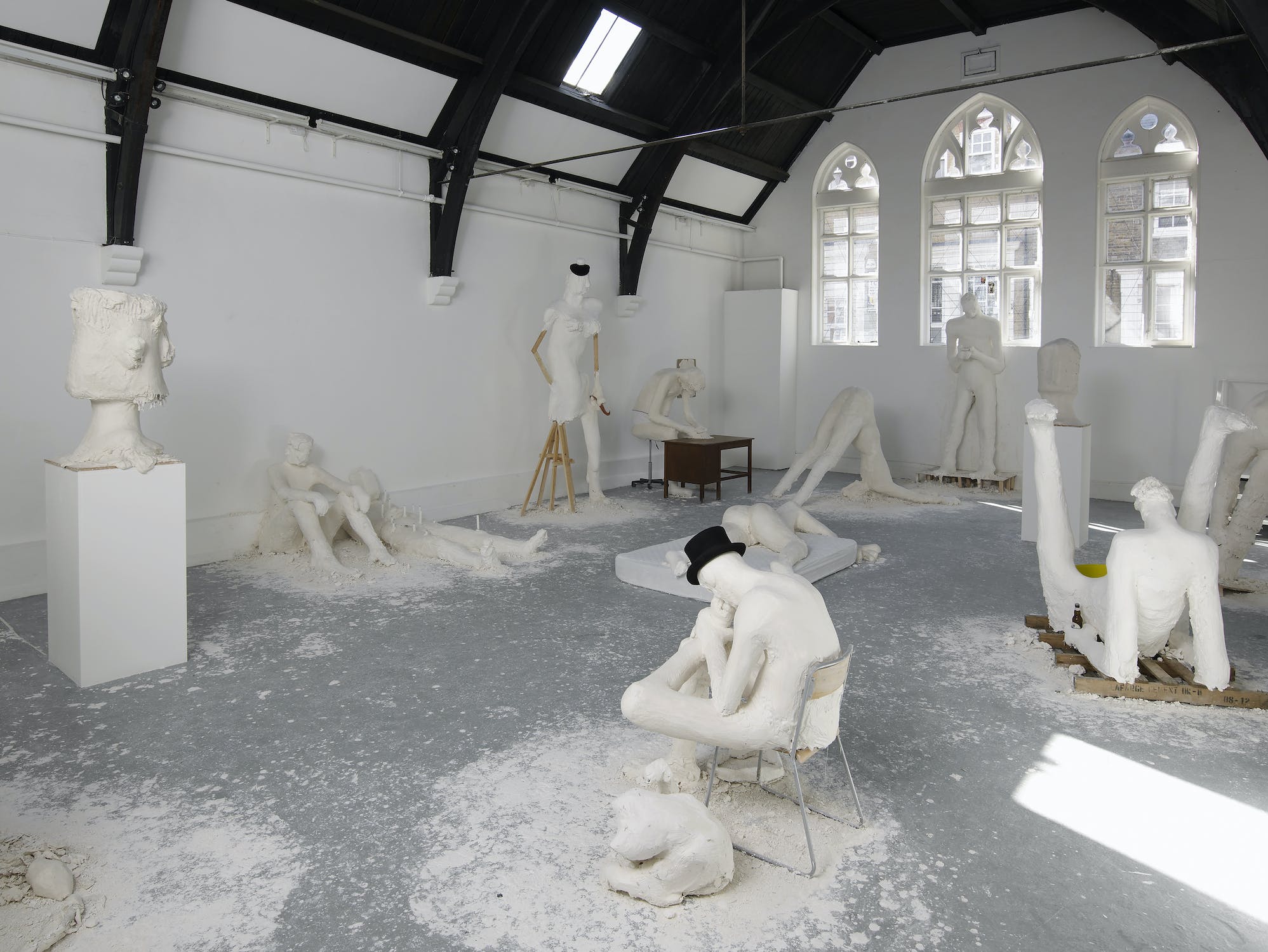 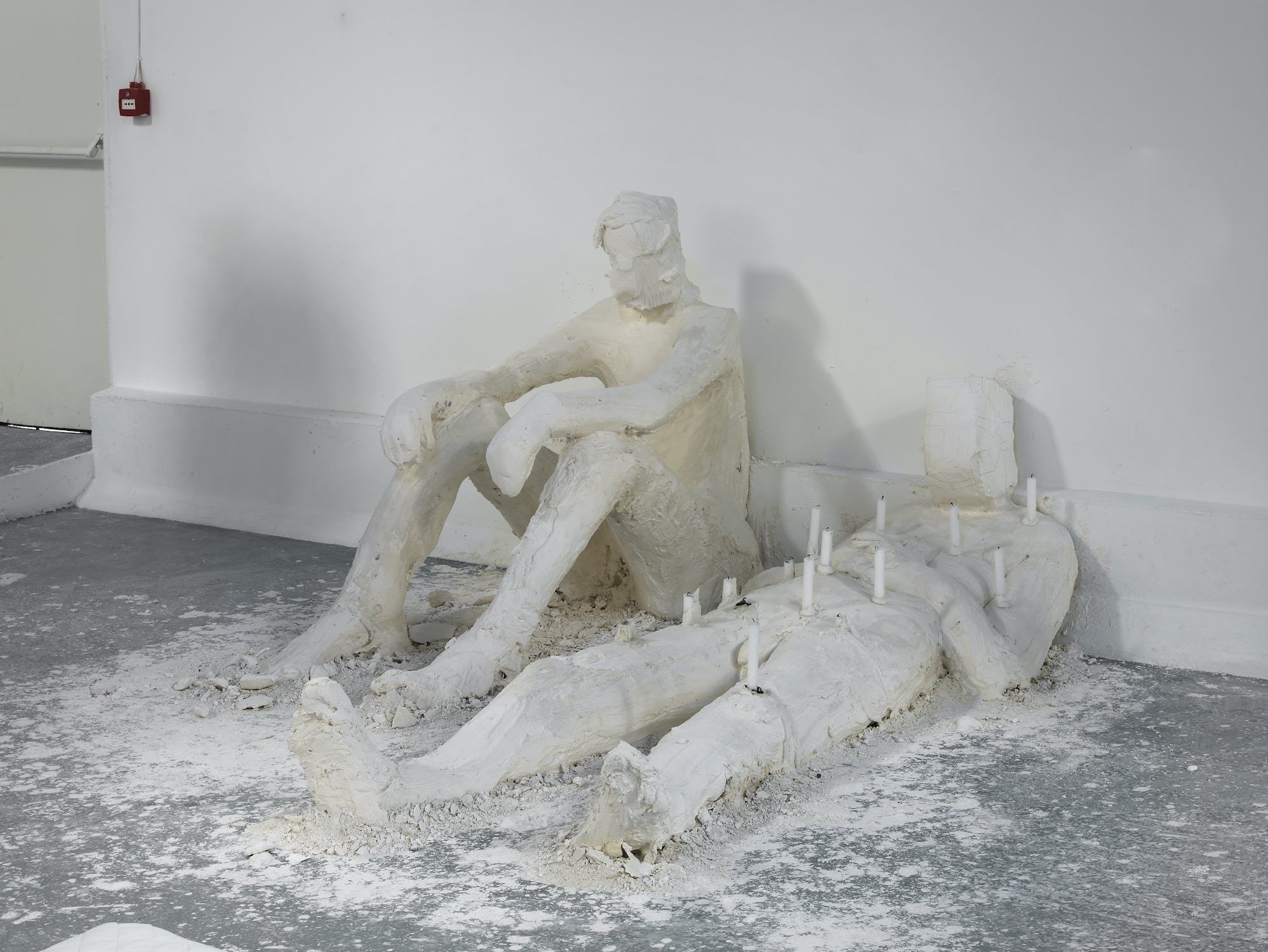 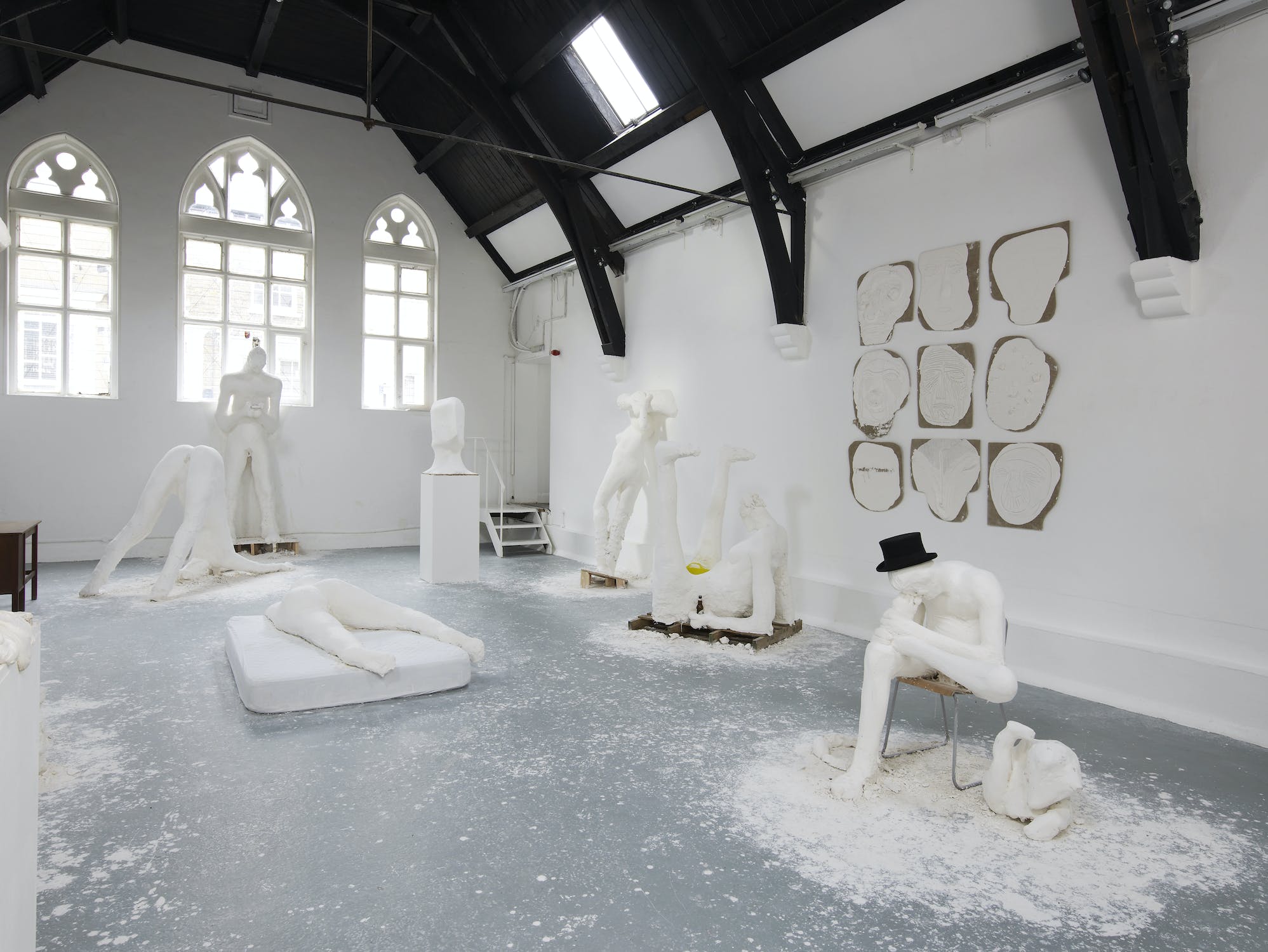 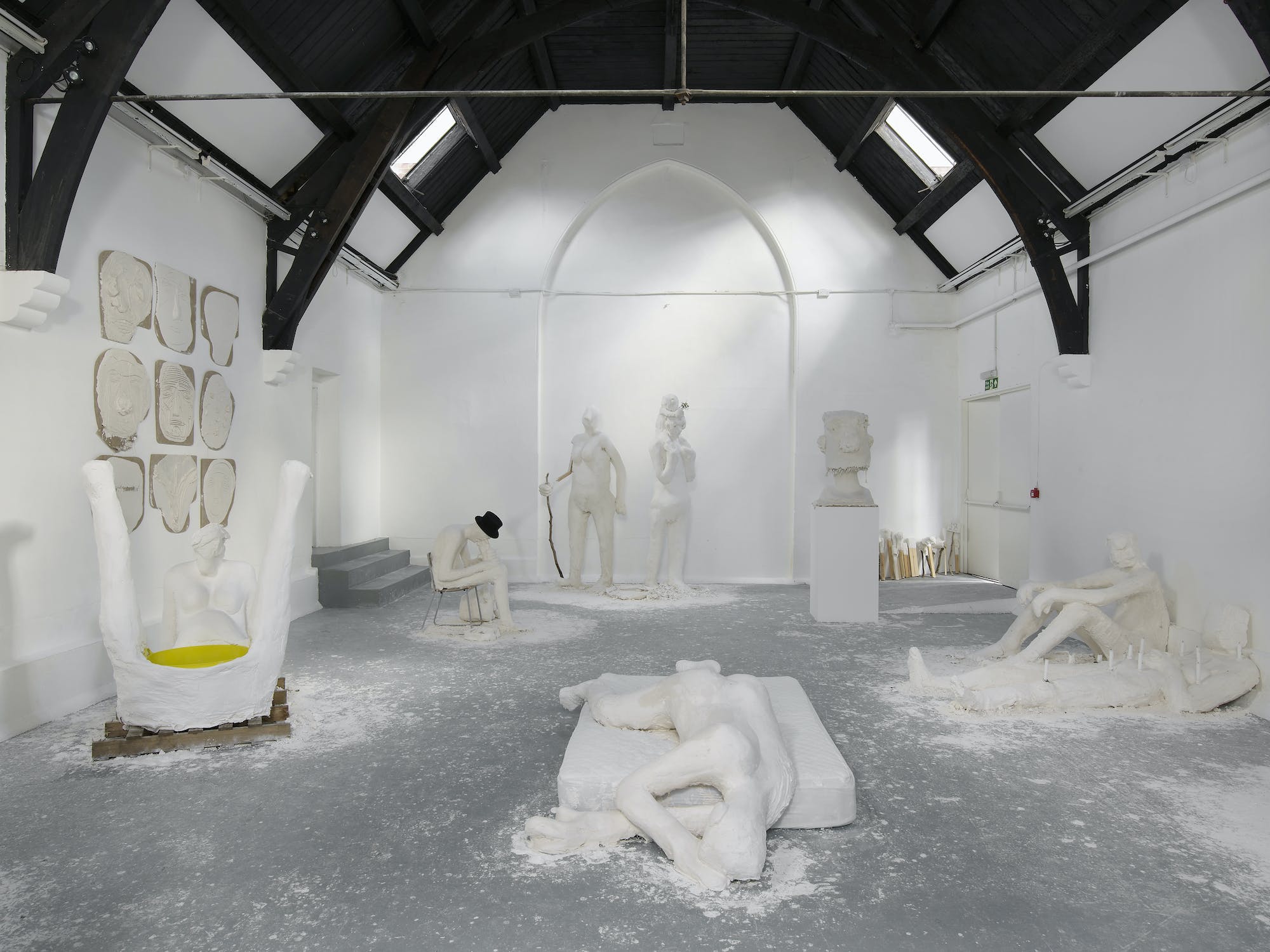 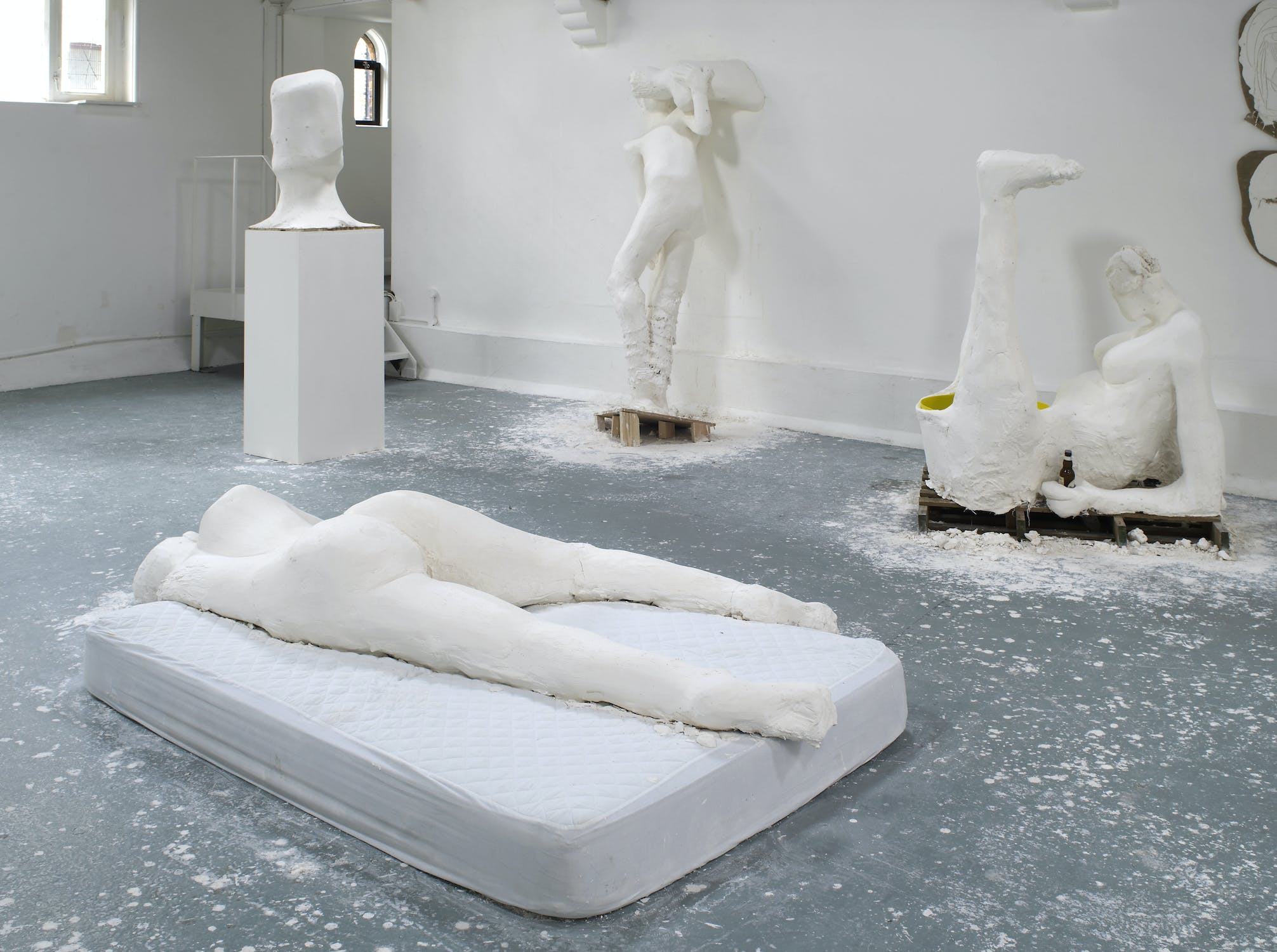 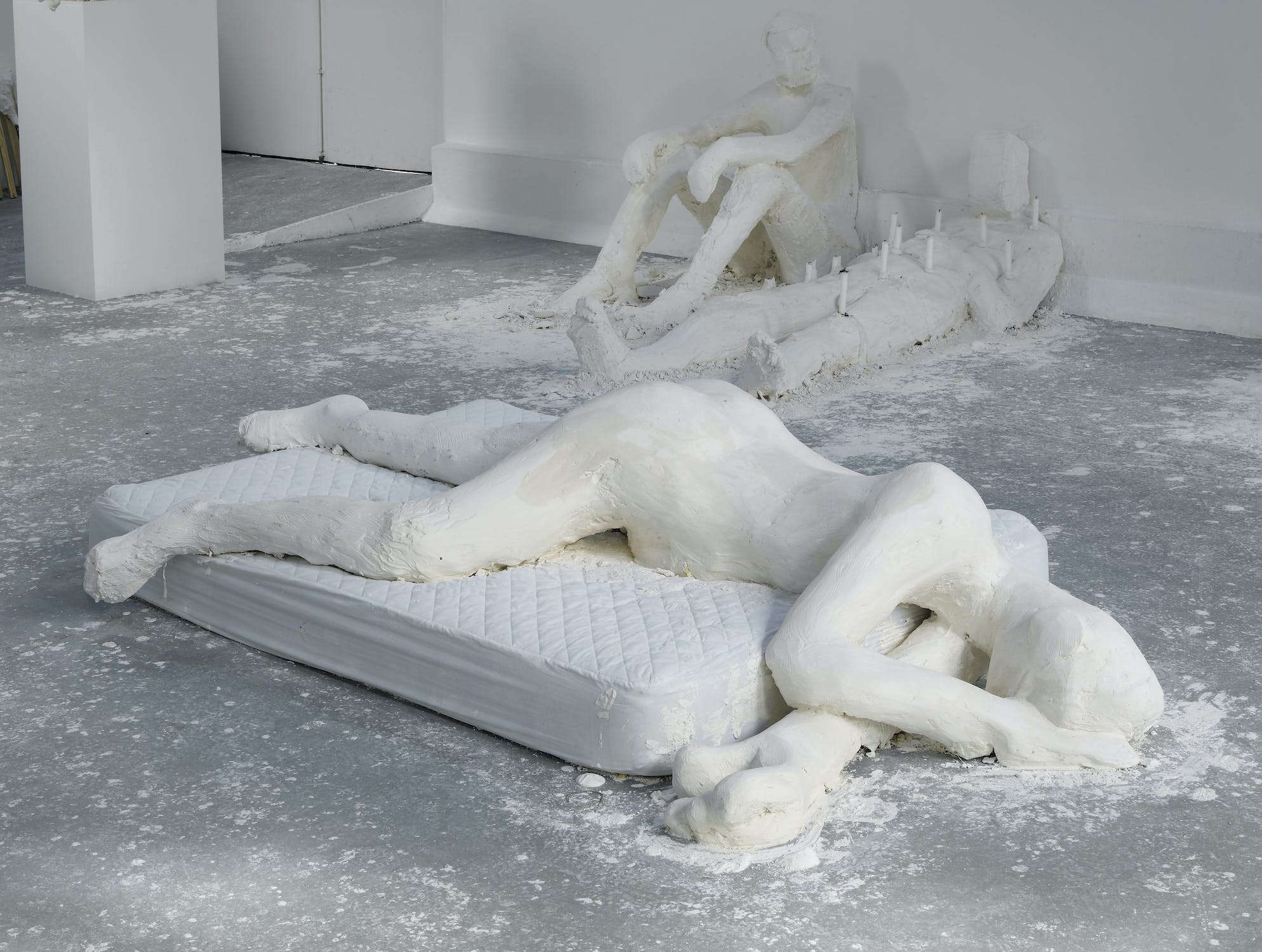 Studio Voltaire presented a new commission by American artist Nicole Eisenman. The exhibition was the artist’s first major solo exhibition in a UK public gallery and follows her participation in the 2012 Whitney Biennial.

For her presentation at Studio Voltaire, the artist created a series of large-scale sculptures, mainly of plaster, all of which were made onsite during a month-long residency. Known predominantly as a painter, Eisenman’s new works show a continued fascination with the figure, as well as the spaces such figures inhabit and the interaction with one and other. Expanding from ideas of the figure and how it operates, we are presented with a series of sculptures making particular yet absurdly familiar movements and actions.

Whether sleeping, walking, texting, kissing or in some form of dance, the figures represent particular gestures or a visual language for performing and acting something out. Through the use of rough materials, the works do not hide how they have been constructed. You get an idea of how the artist has worked, what it is to assemble a body, and by extension how the body is made. The crude visibility of construction apparent in the figures points to how we physically experience materials. The artist explains: “I’m thinking about touch and desire as I’m making the work. The way the material feels, the temperature of the body, the delicacy and strength… There is something very sensuous about this material, these bodies, the act of rubbing and the visceral sexiness of touch and texture combined with the weight of the plaster and the mysterious heat it generates, it’s dreamy work.”

Eisenman has been inspired by queer and intersex bodies, with the gender ranges from non-existent/neutral to uncertain to trans to Amazon. The work not only celebrates the body, but it can also be understood as a challenge to the idea of the classical body. Following Mikhail Bakhtin’s principle of grotesque realism, Eisenman lowers all that is abstract and idealised to the material level. We are presented with bodies that celebrate the corporal and the social.

With kind support from Brooklyn Beer.