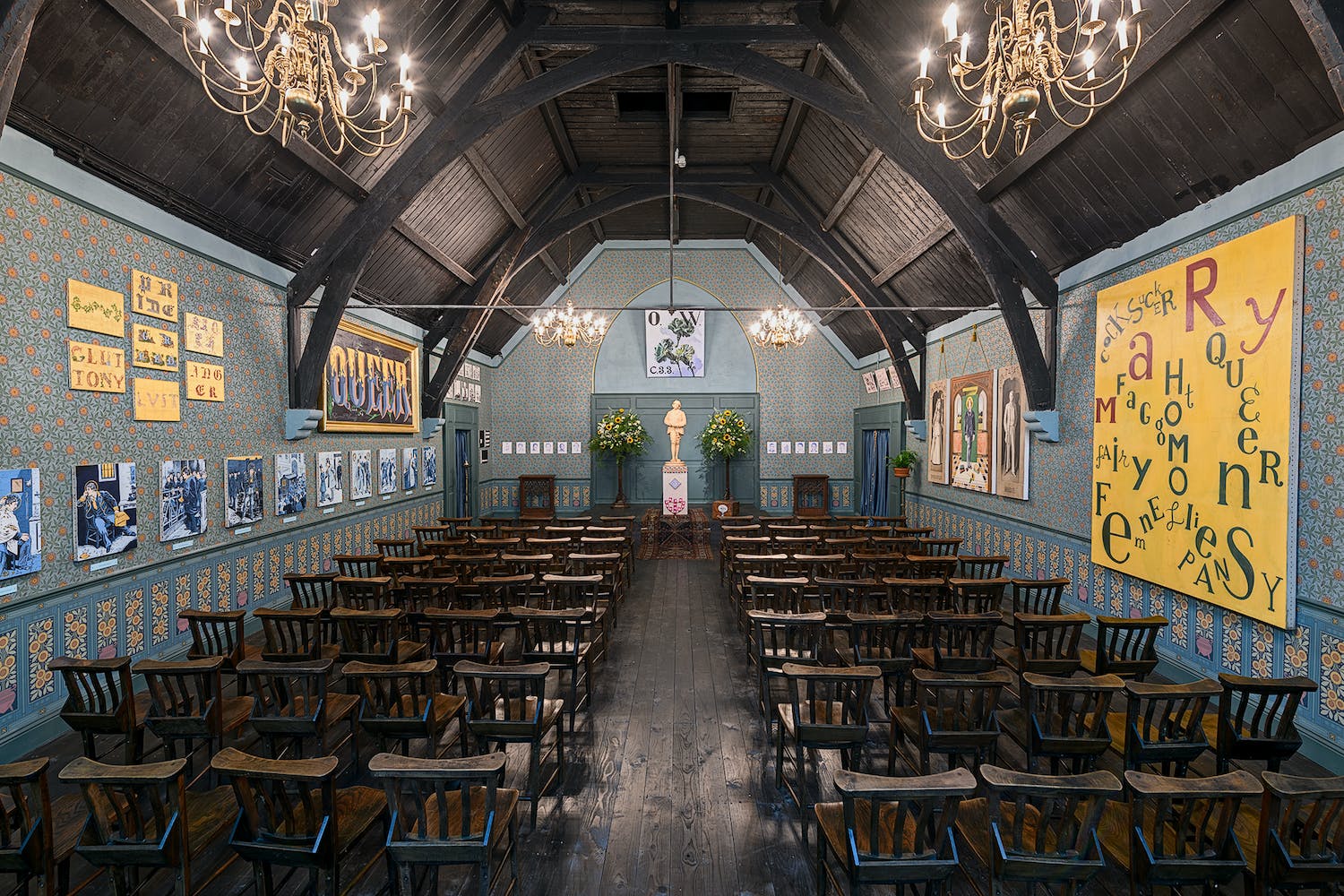 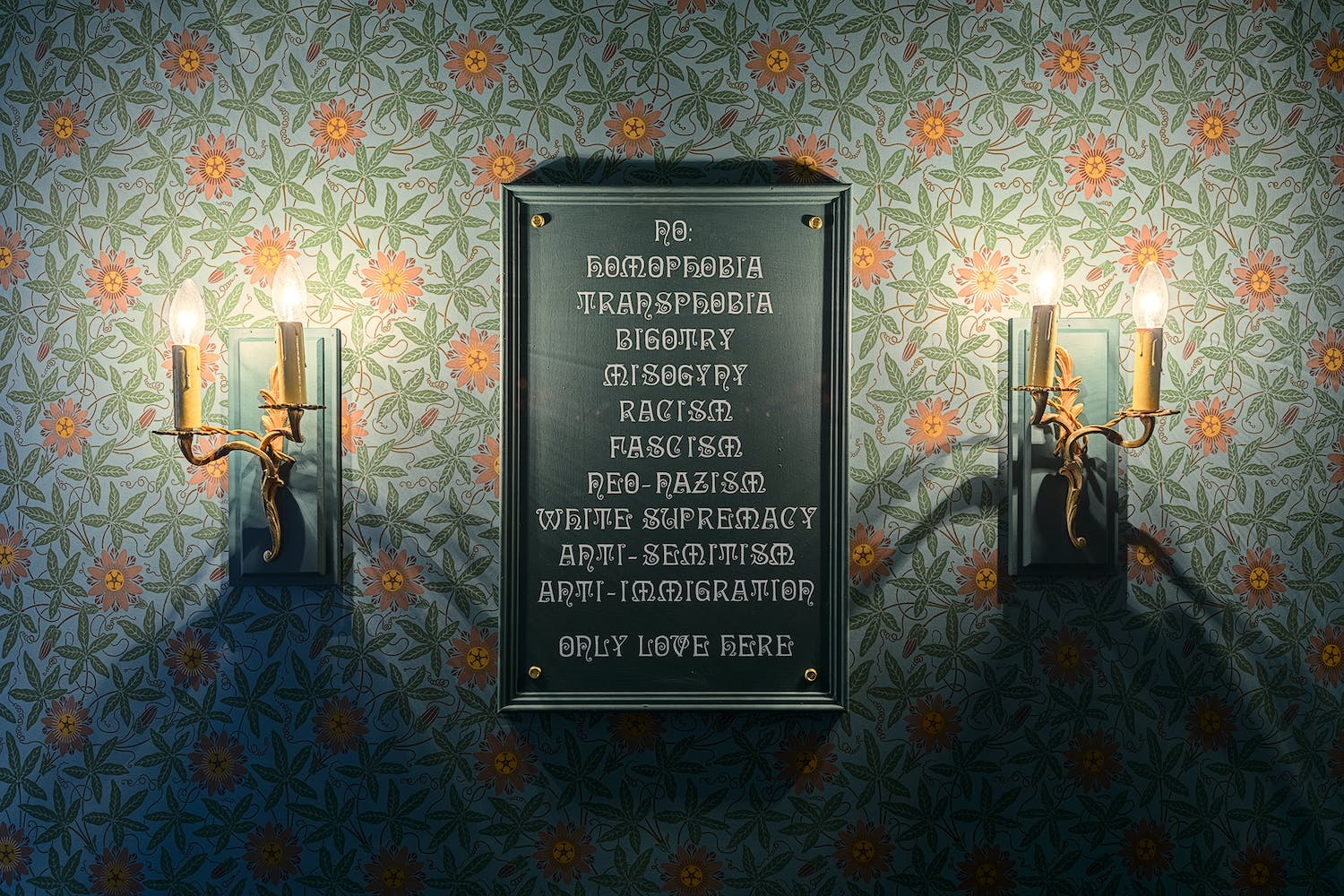 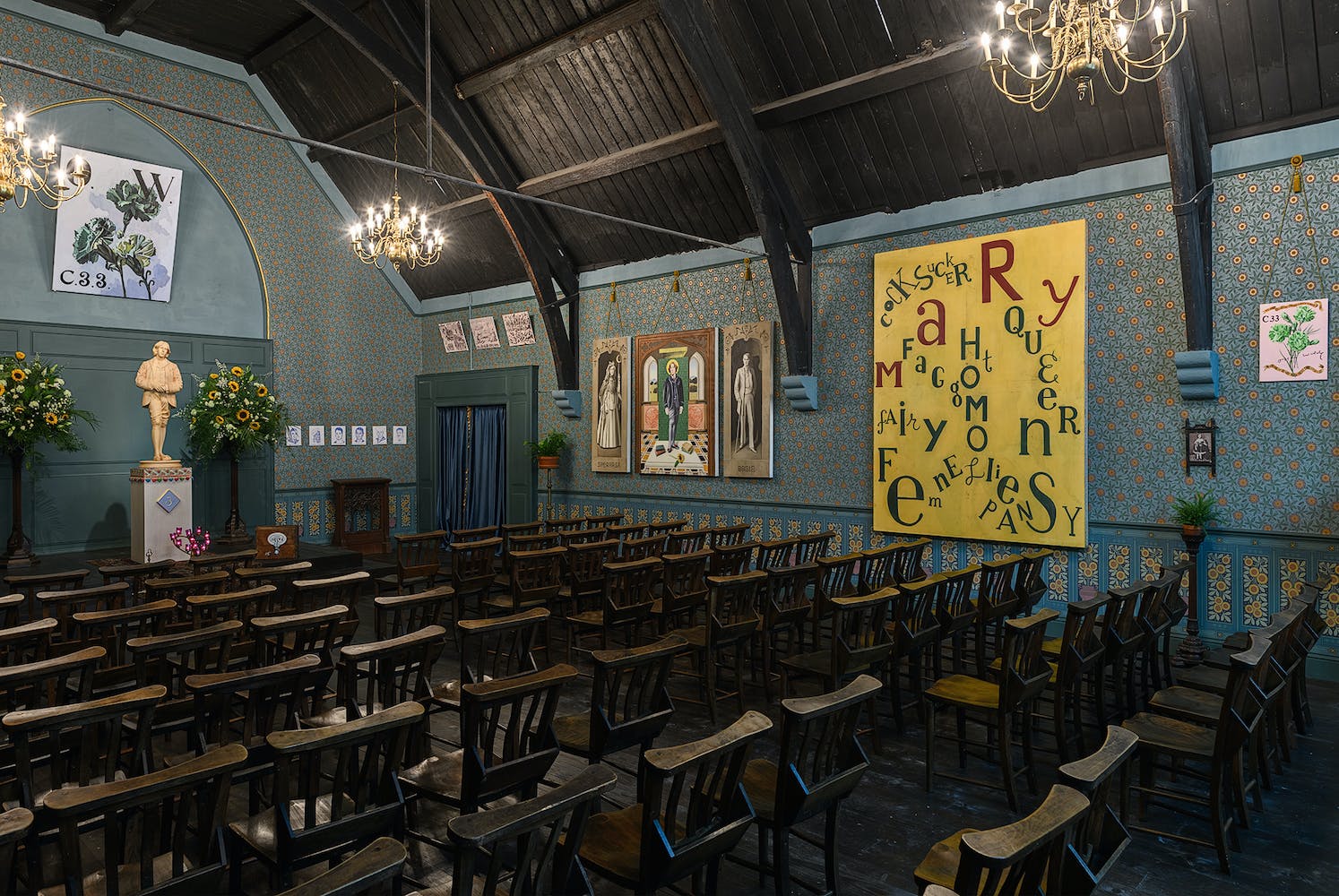 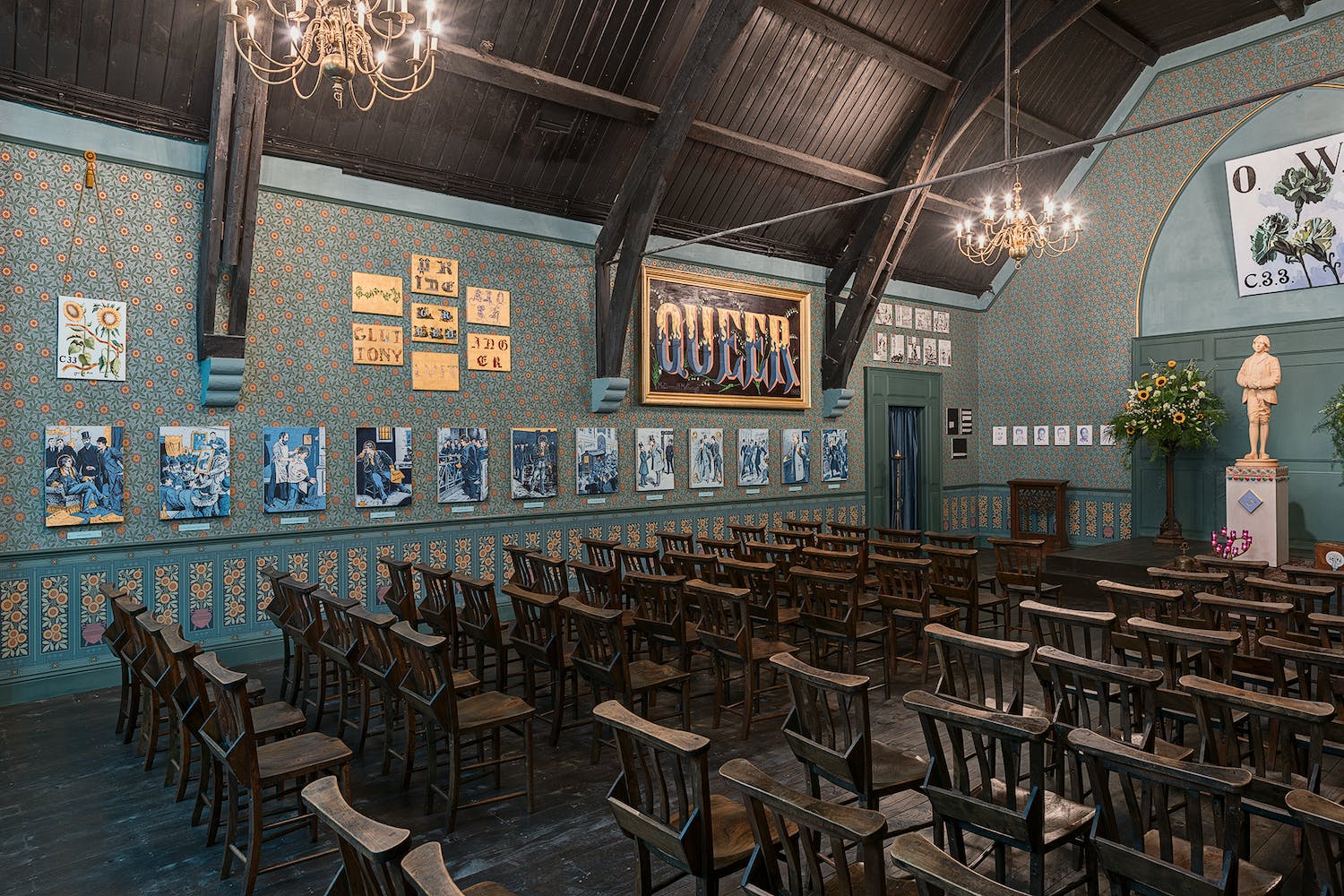 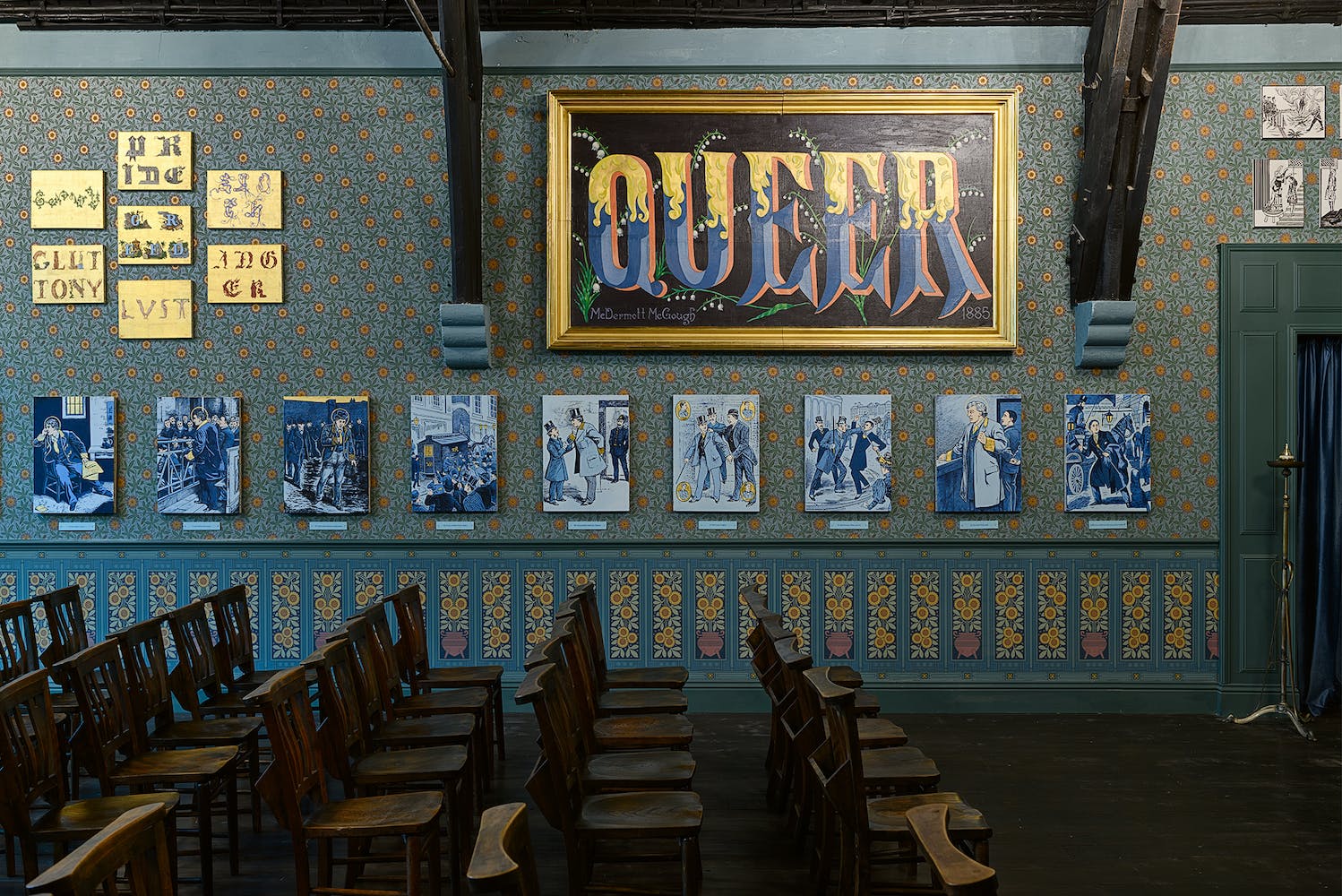 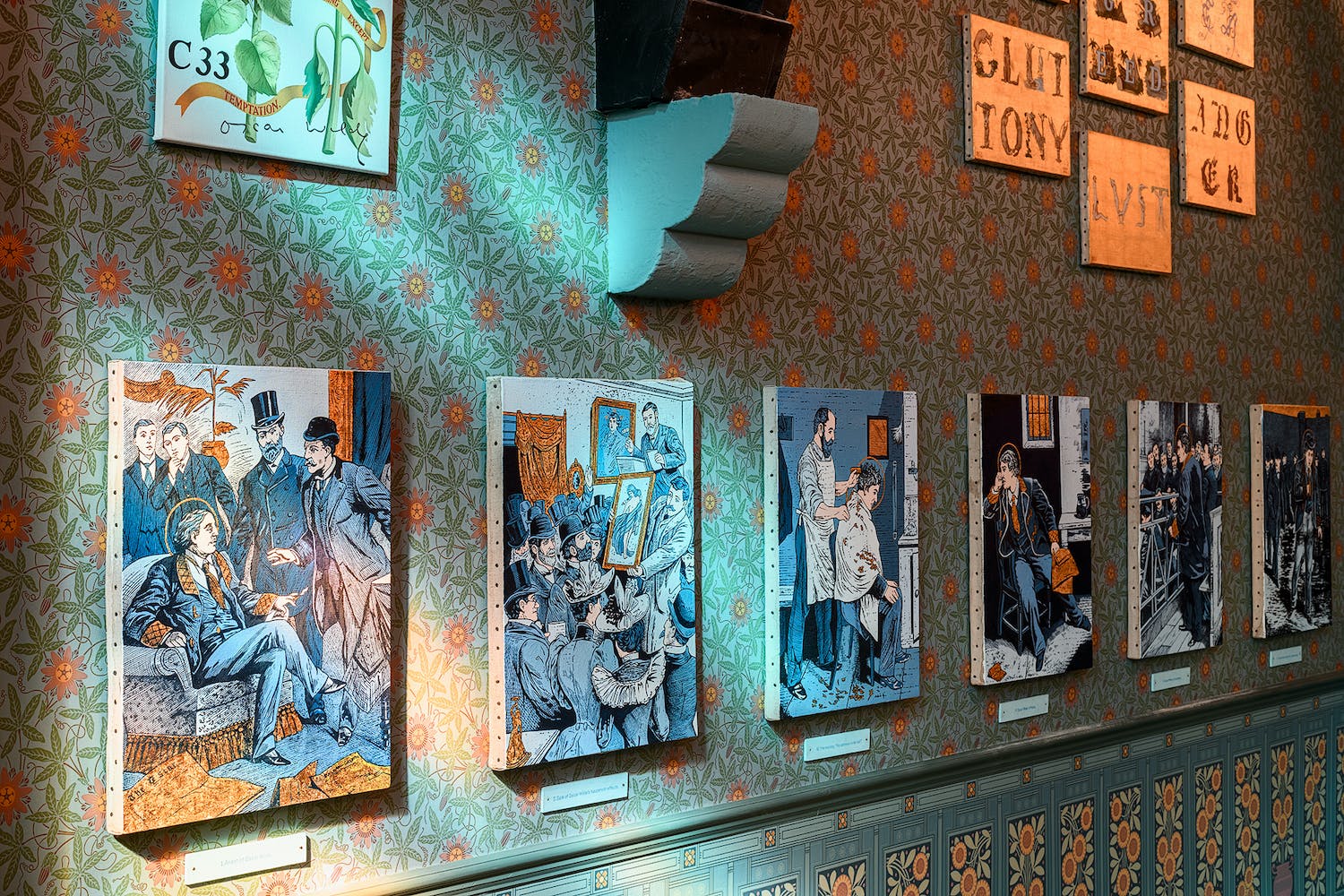 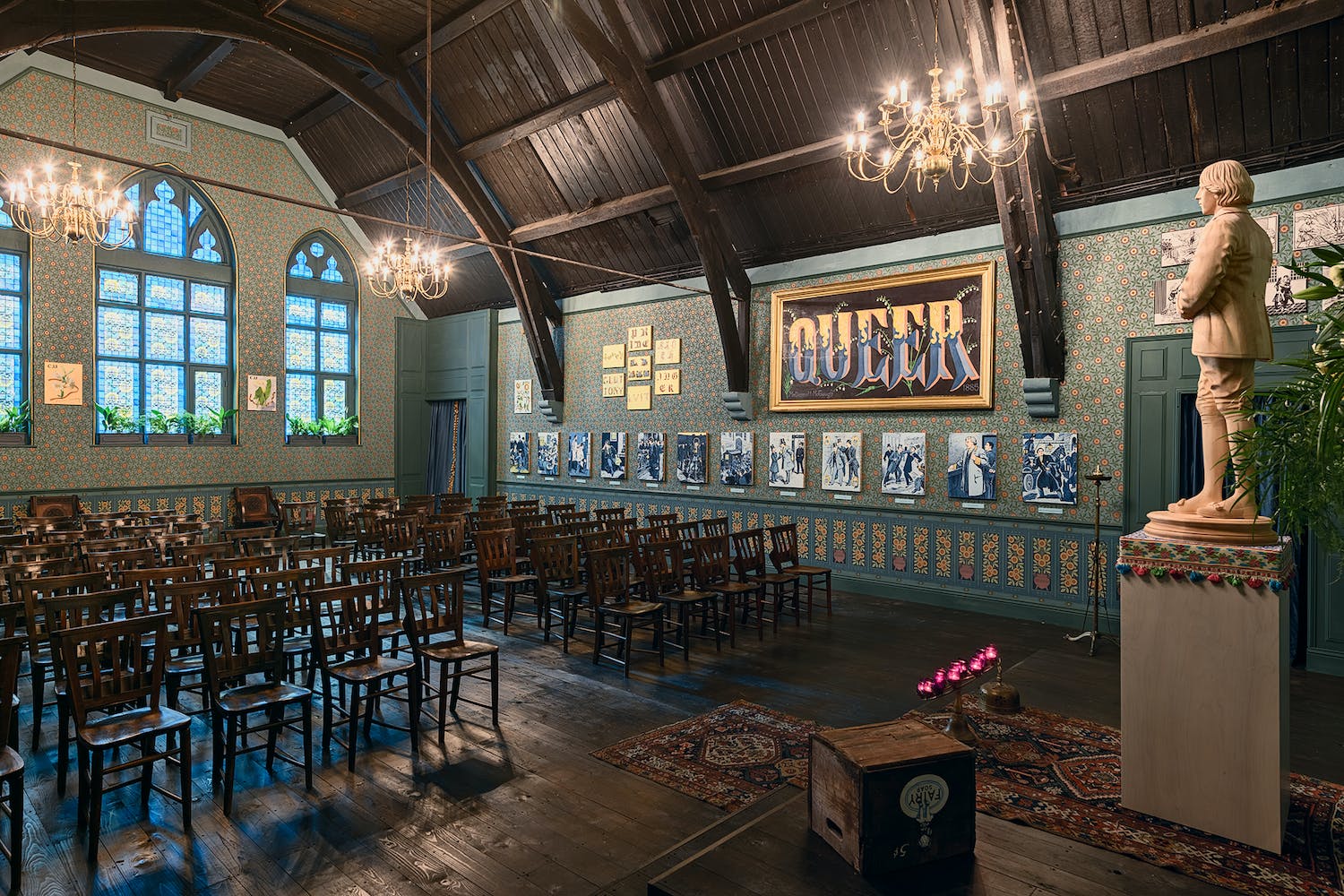 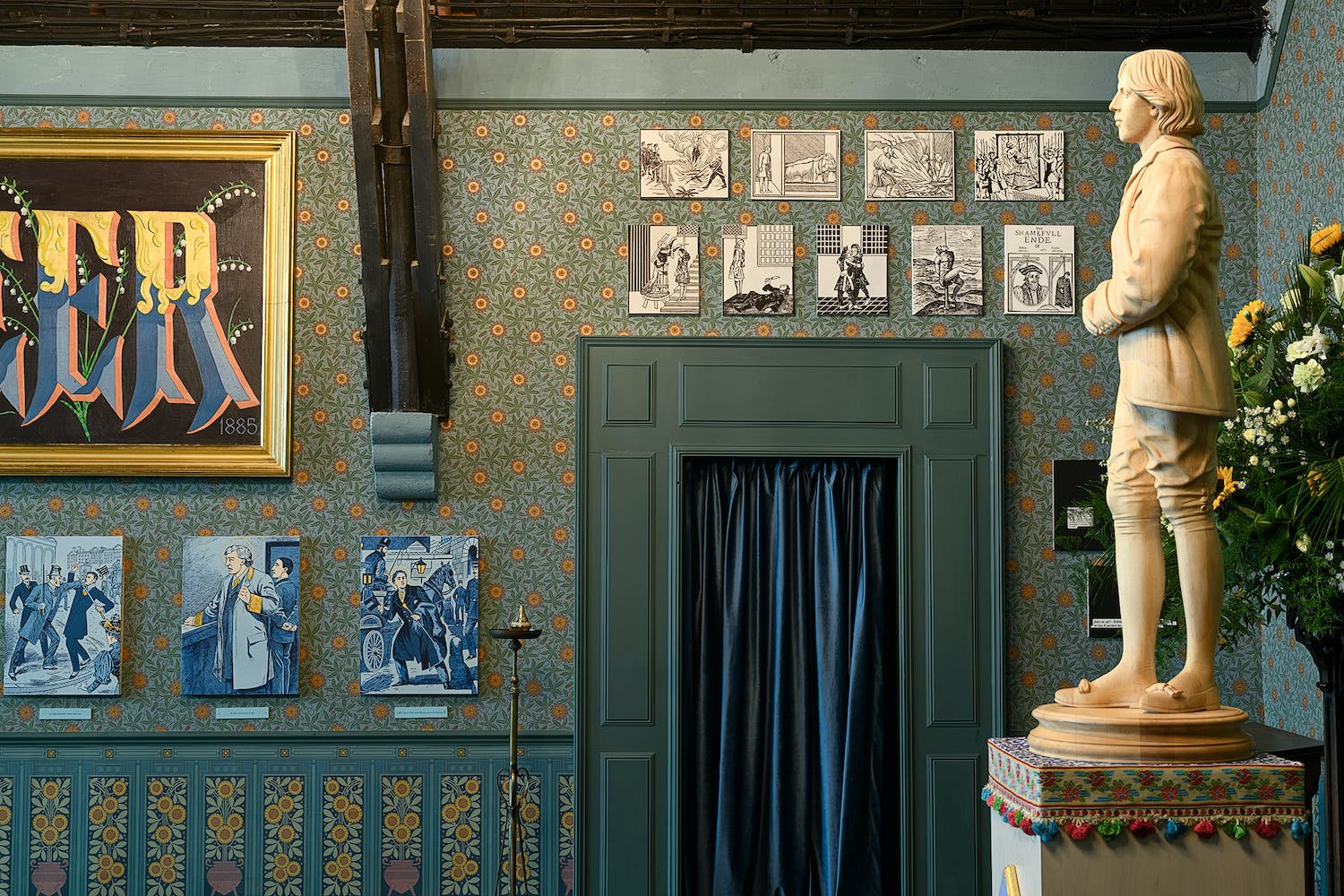 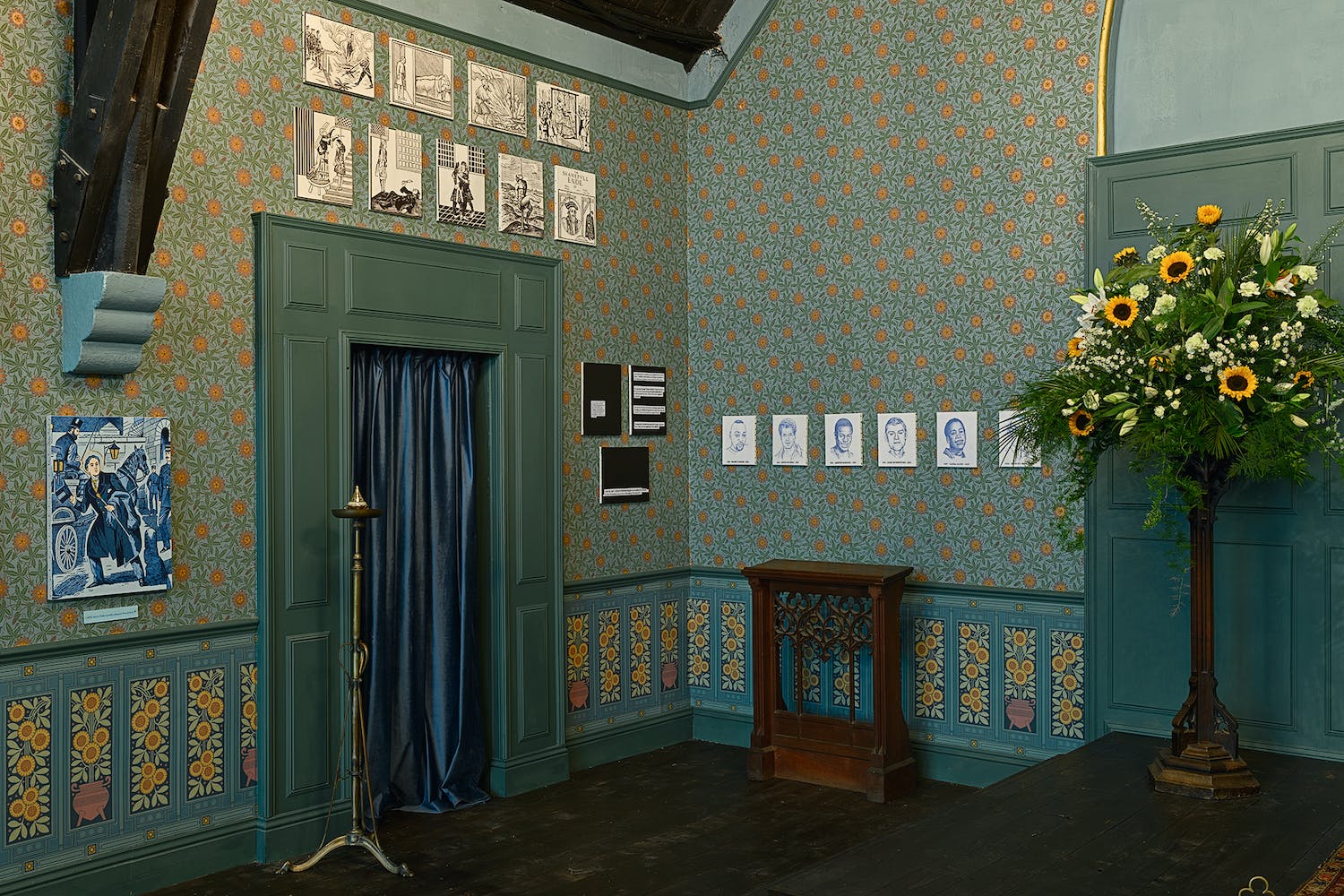 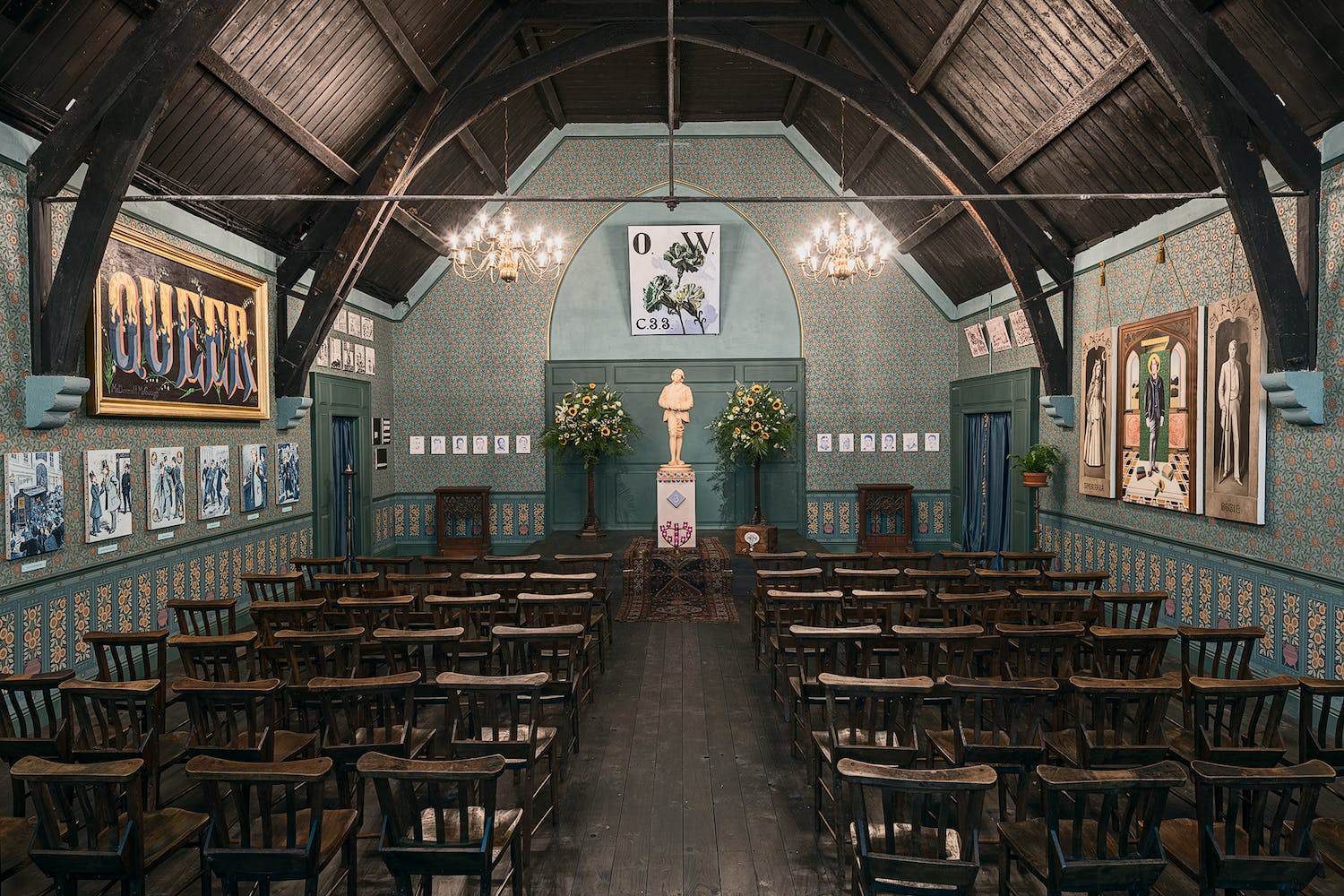 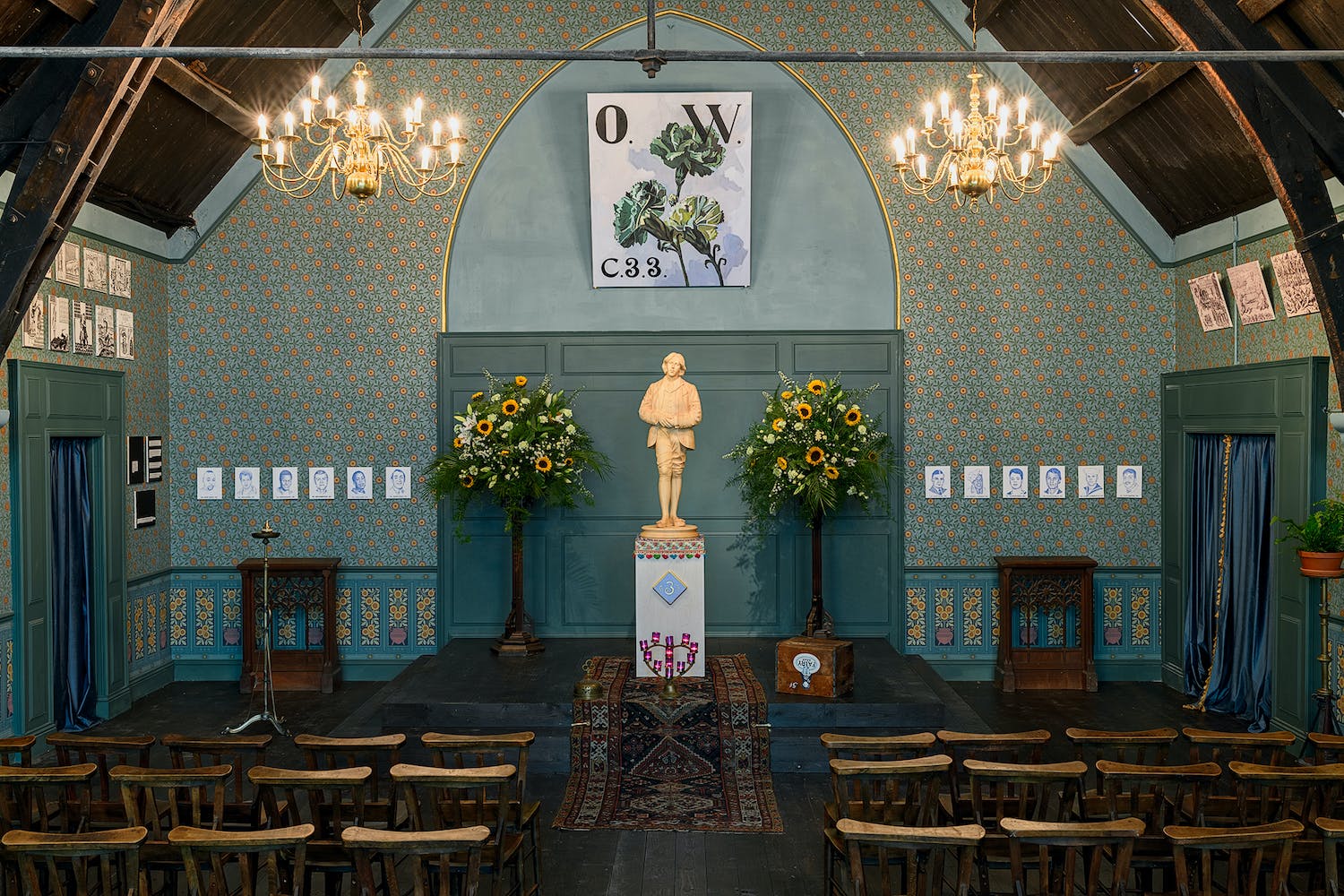 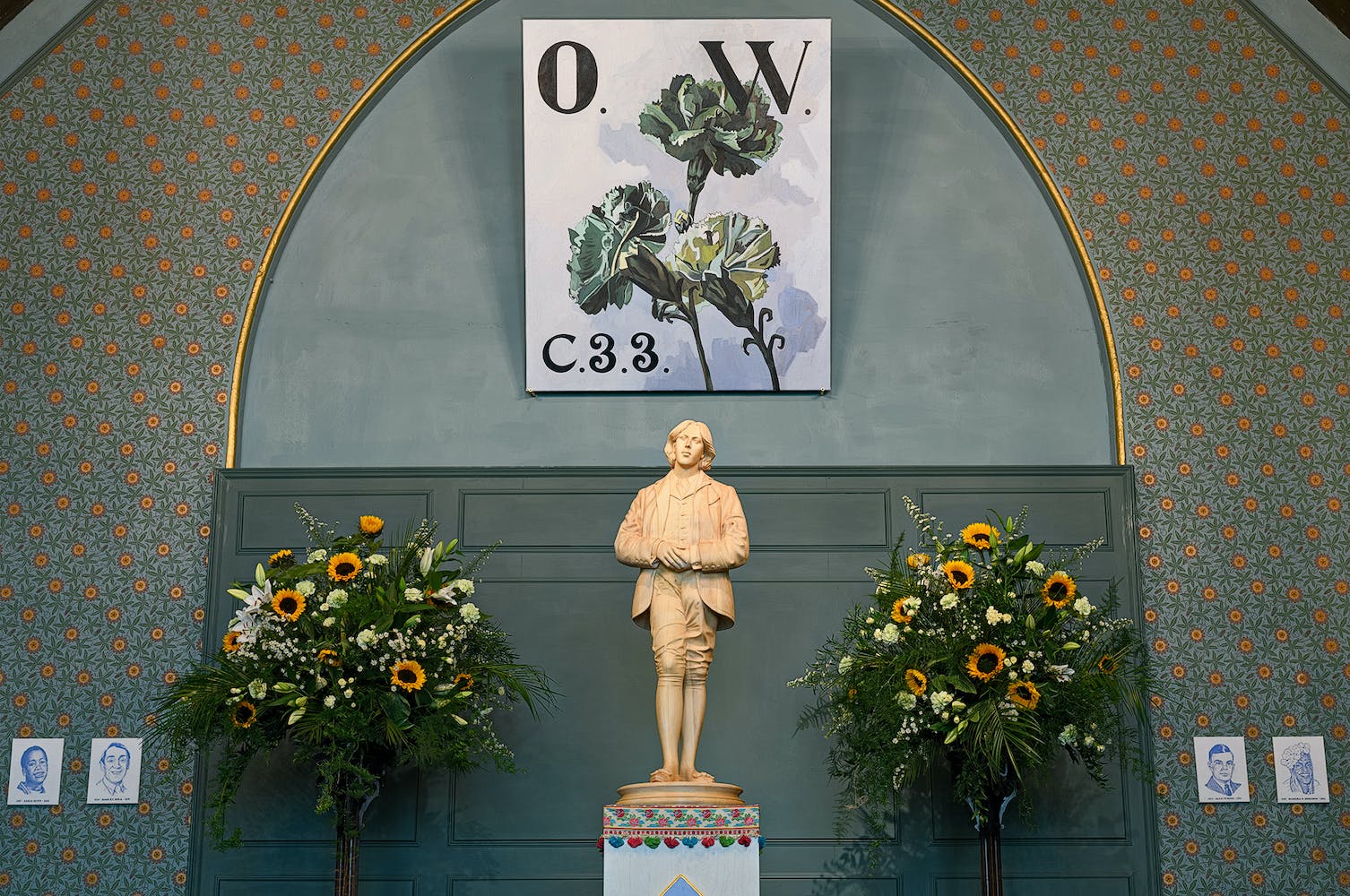 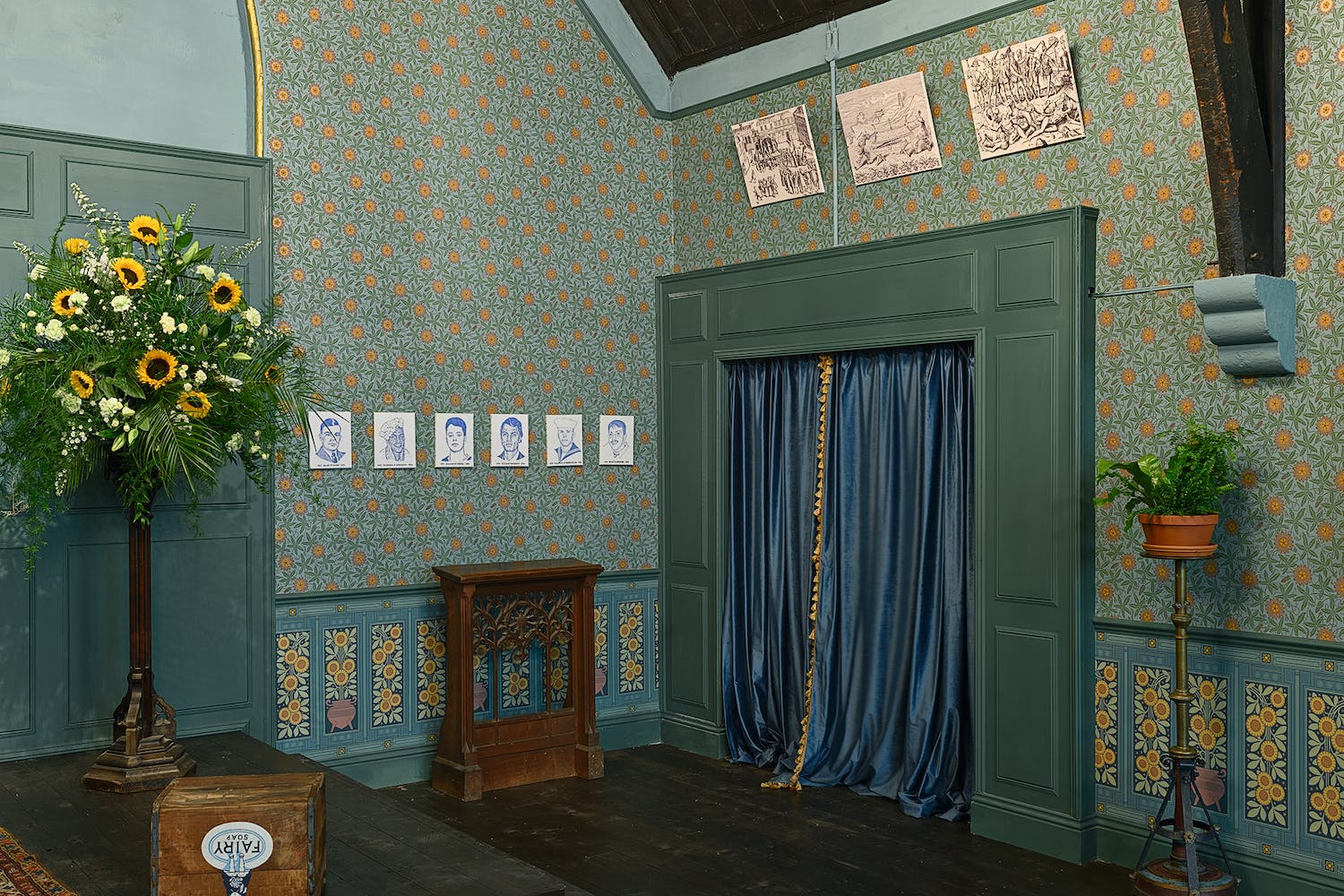 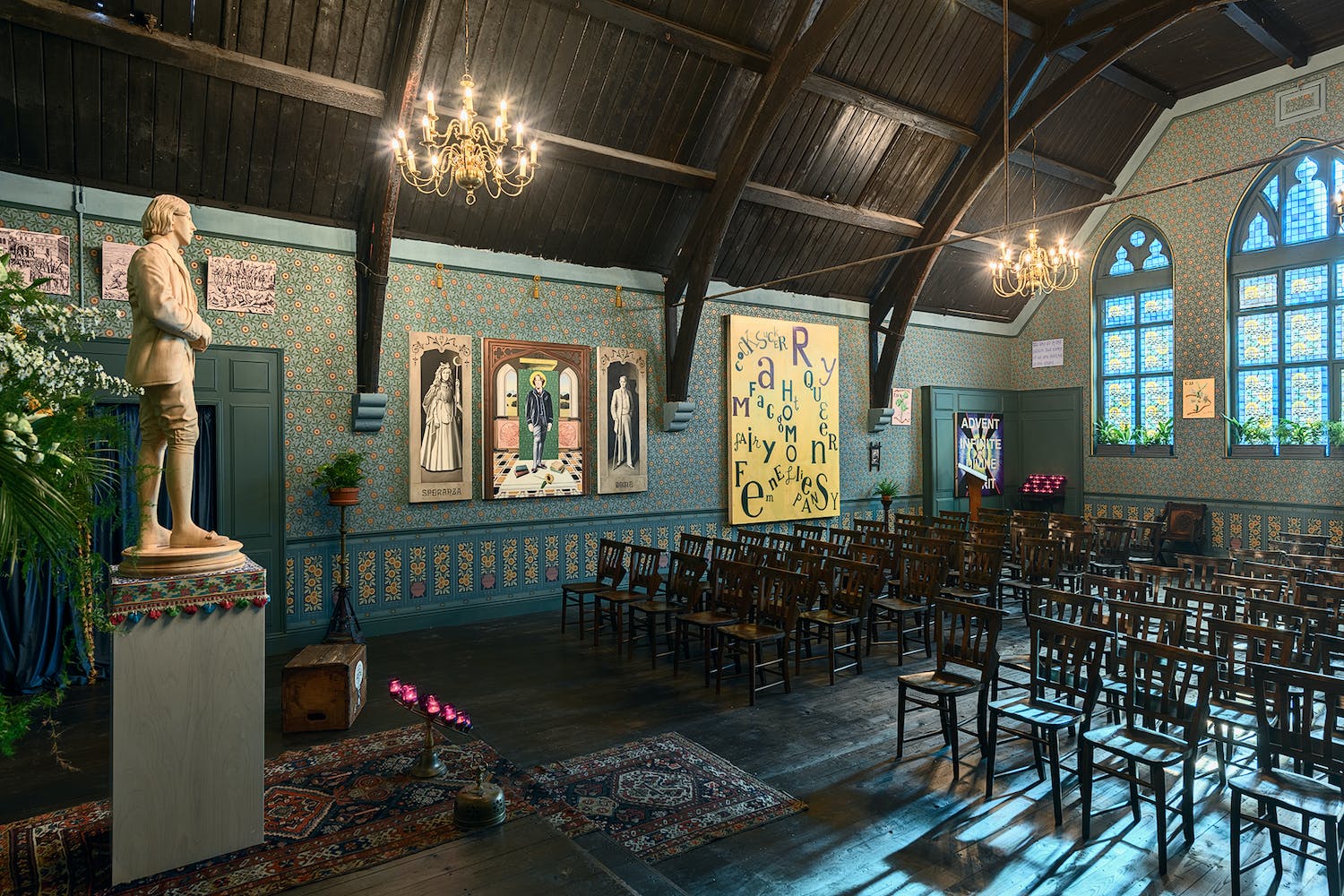 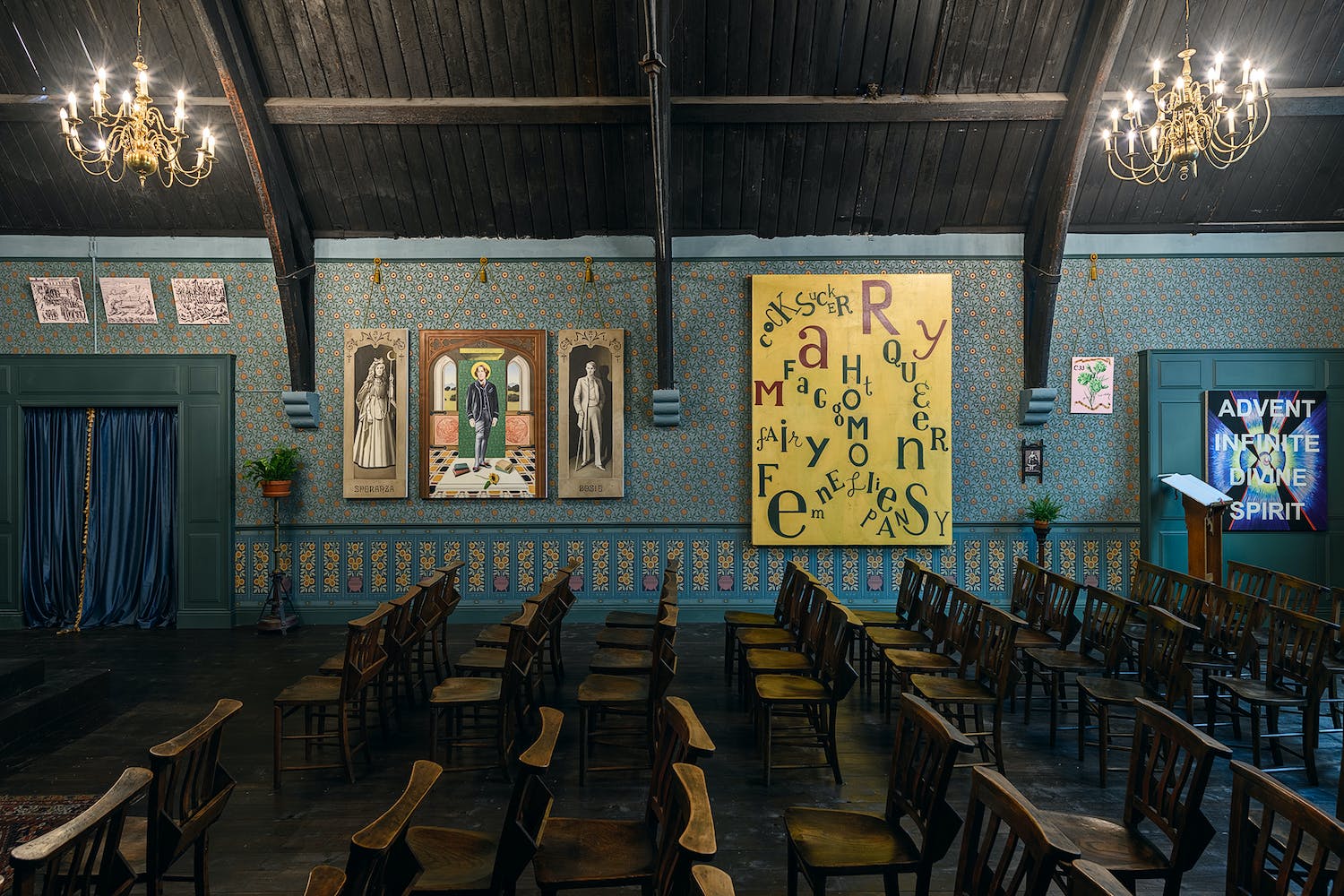 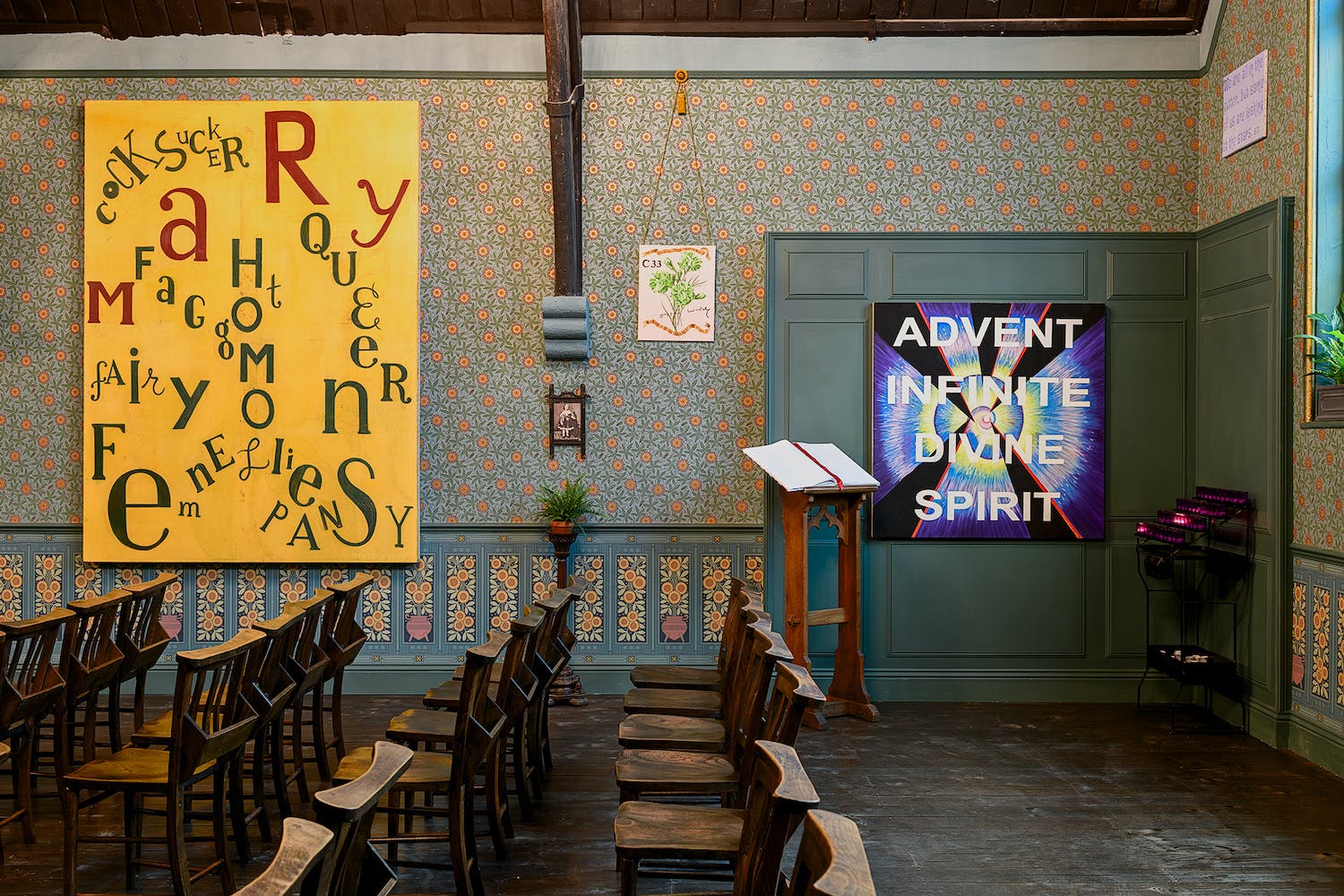 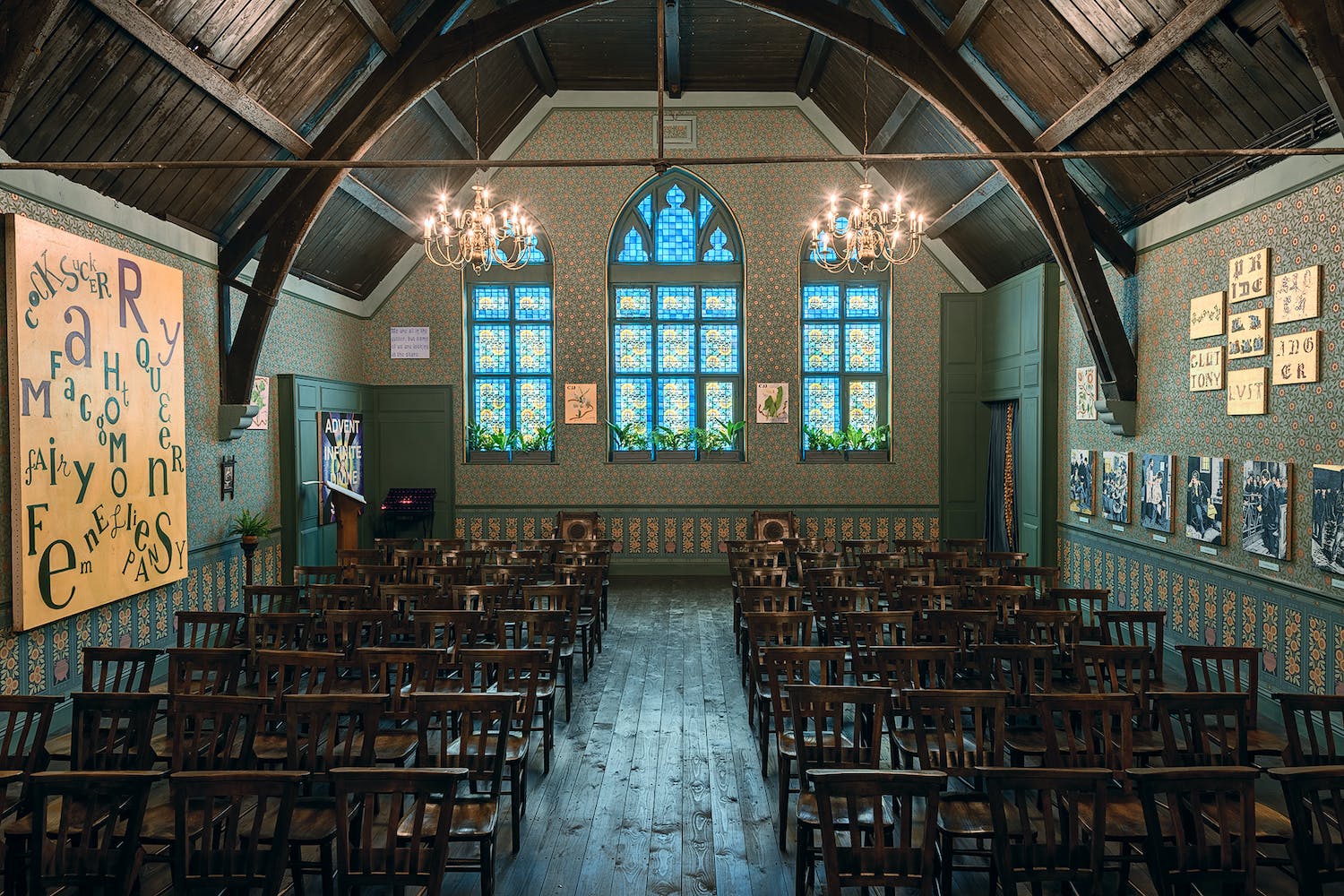 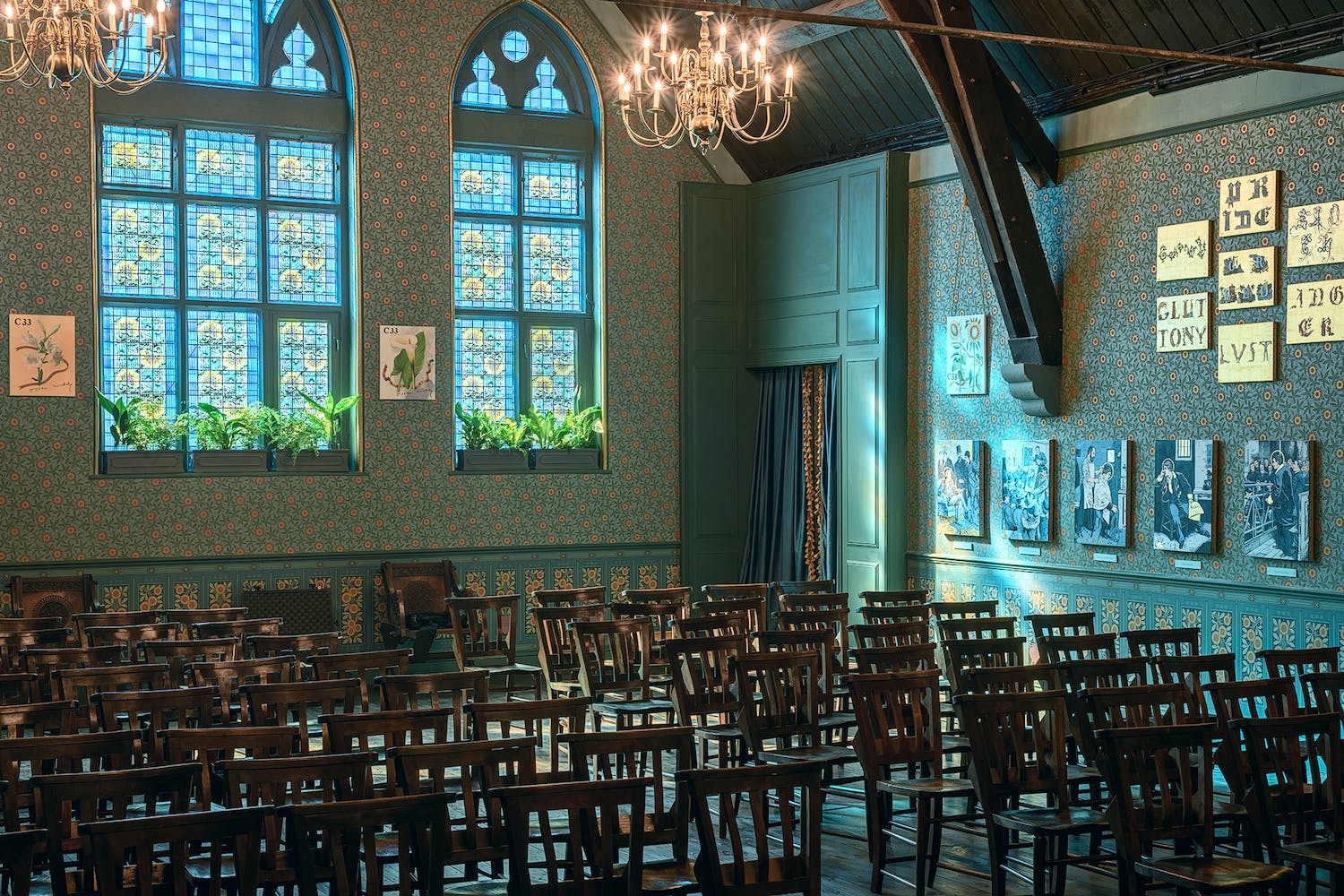 For this major new commission, the entirety of Studio Voltaire’s gallery, a Victorian former chapel, was dramatically transformed to create an environment that wholly celebrates the Irish poet and author. Period wallpaper, stained glass windows, hangings and 19th century chandeliers and furniture adorn the space, evoking the provocative sensuousness of the Aesthetic Movement. Open to the public for six months, individuals and families were welcomed into The Oscar Wilde Temple for private reflection, as well as to celebrate LGBTQ+ marriages, naming ceremonies, vow renewals, memorials and markings of other important occasions.

McDermott & McGough use the lens of Wilde’s legacy to make visible the traumatic history of queer identity while directly addressing the continuing inequalities faced by LGBTQ+ communities. Their work frequently addresses the homoerotic aspects of Victorian culture, while simultaneously acknowledging the oppressive politics of the period.

Having worked collaboratively since 1980, McDermott & McGough achieved notoriety in the bohemian downtown quarters of New York with their performative ‘time machine’ experiments. This all encompassing gesamtkunstwerk saw their dress, home and art studios, down to the materials and techniques they deployed, remain strictly faithful to the late nineteenth and early twentieth centuries.

By refusing the contemporary present in favour of fabricating their own queer version of the past, McDermott & McGough asserted a revolutionary queer agency well ahead of their time. Their practice is a singular and prescient voice among the numerous politicised and activist artists that emerged into the mainstream during the AIDS crisis. McDermott & McGough’s work frequently addresses the homoerotic aspects of Victorian culture whilst acknowledging the oppressive politics of the age.

Alongside the exhibition, a wide–reaching Participation Programme in partnership with national LGBTQ+ youth homelessness charity The Albert Kennedy Trust offered a six month programme of workshops, events, mentoring and professional development for LGBTQ+ young people, in partnership with leading artists, writers and designers.

Curated by Alison M. Gingeras in partnership with Studio Voltaire.

With special thanks to 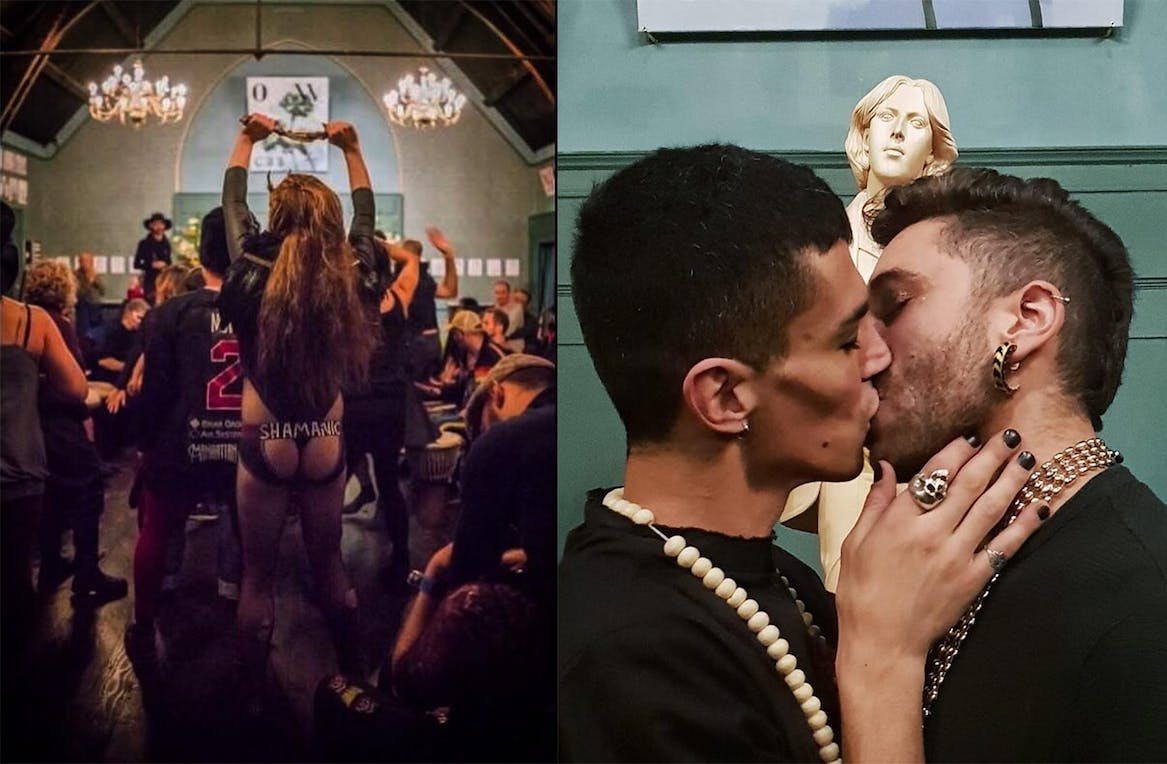 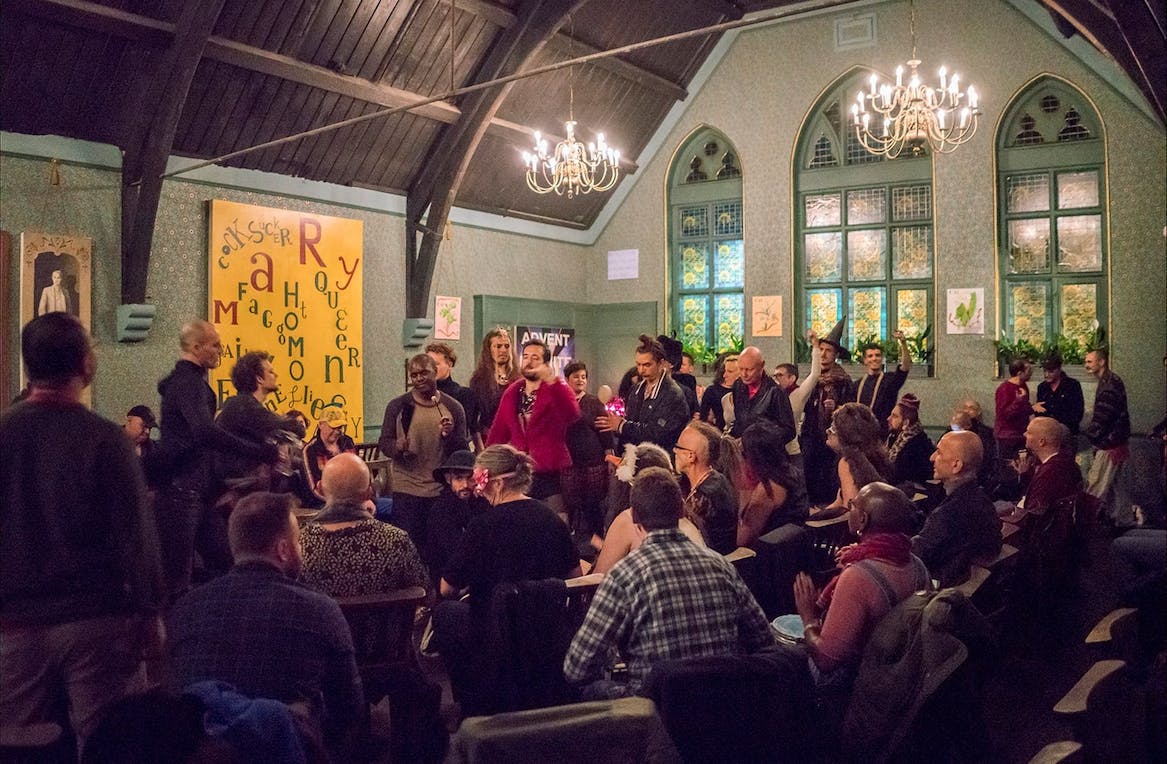 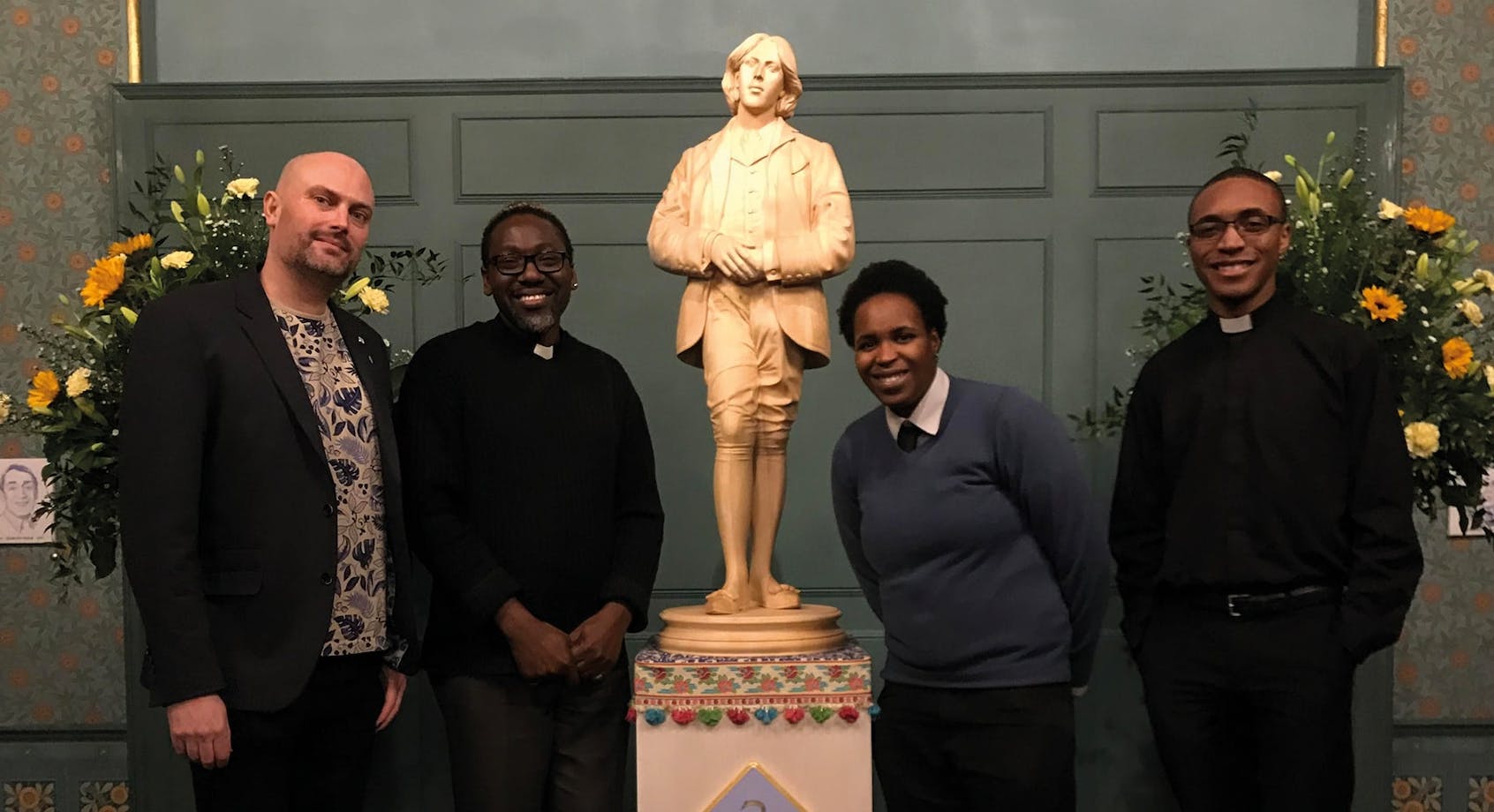 For McDermott & McGough, a central concern was for the Temple to be used by LGBTQ+ communities for ceremonies, community meetings and other special events. In response to the artists’ intention, Studio Voltaire issued a London–wide invitation, eventually working with over 20 LGBTQ+ organisations, charities and individuals to host over 70 events.

Alongside our programme of public workshops, tours, andtalks by artists, activists and academics, our community–led programmes included a Samhaim drumming circle; a “Queer New Year” letter writing workshop; a youth social with 16-25 year old LGBTQ+ people who have experienced homelessness or are living in a hostile environment; a faith gathering for the LGBTQ+ POC community with House of Rainbow; and a wedding.

The Oscar Wilde Temple was particularly celebrated and utilised by the 50+ LGBTQ+ local communities of Clapham, Wandsworth and Brixton. 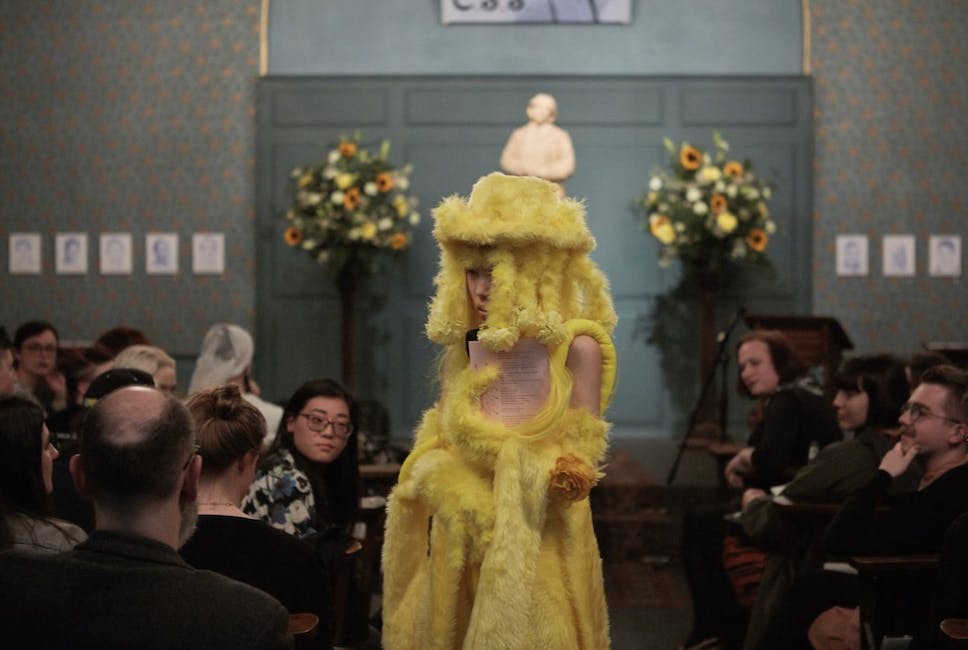 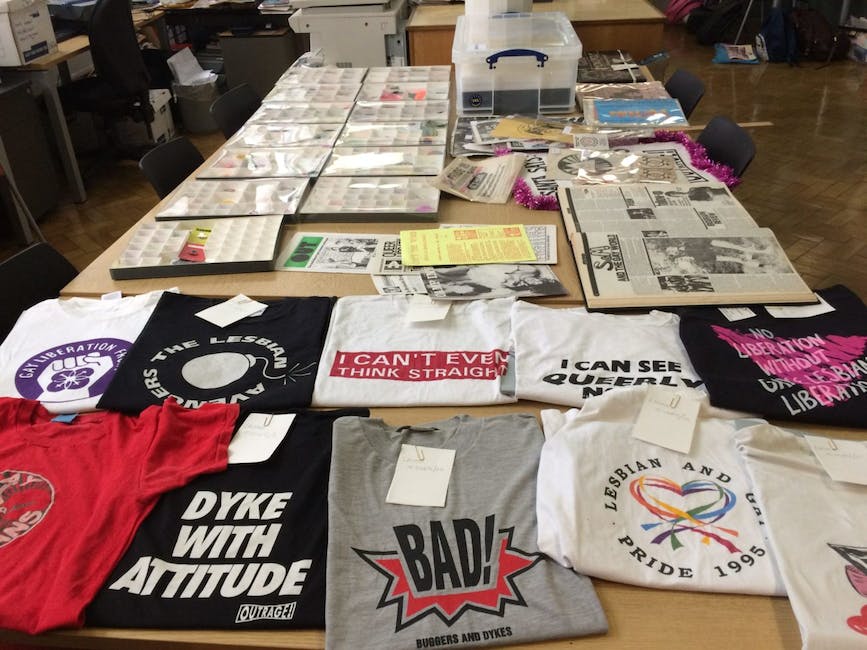 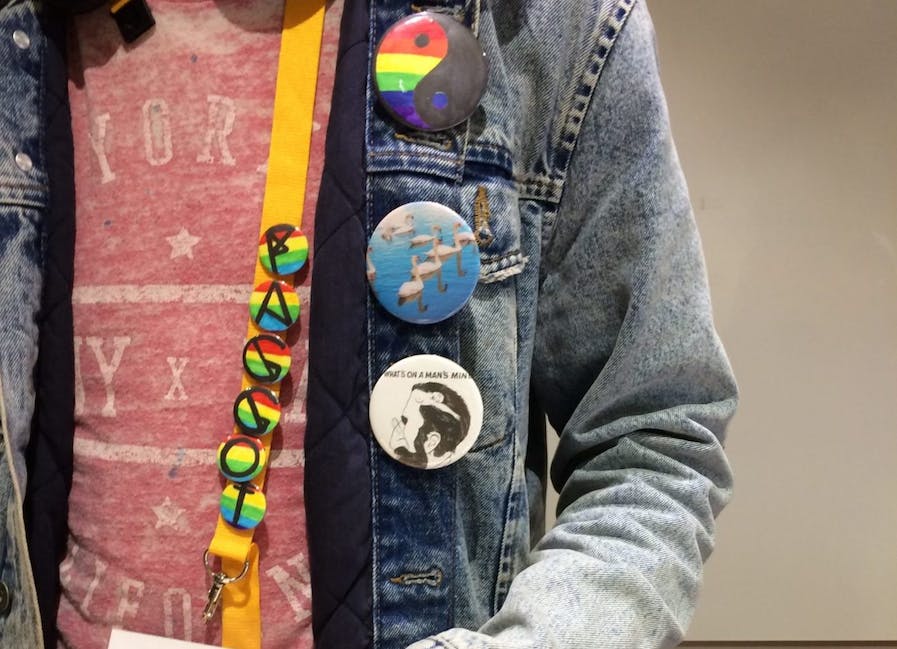 The OWTAG was open to anyone aged 16-25 who identified as LGBTQ+. The group drew inspiration from the exhibition, to explore queer and trans art, history and politics, collaborating with artists to make their own work. The group also took part in archive visits, socials and workshops.

The Autumn programme (October–December 2018) was led by designer Ashish with artist Mark Amura who explored textiles, graphic design and print making. The group visited the LGBTQ History and Alterative Sexuality Collections at Bishopsgate Institute and explored different techniques including badge making, cyanotype printing and marbling, which led to collaboratively designing and fabricating a series of unique fashion pieces. An event and shared meal showcased the final pieces created by the group.

The Winter programme (February–April 2019) was led by writer and filmmaker Juliet Jacques with artist Virgil B/G Taylor to explore different forms of writing and its dissemination, including short stories, fiction and life writing, through performance and zine making. A zine which included poetry, prose and fan-fiction as well drawn contributions, was collaboratively designed with artist Virgil B/G Taylor. Jacques’ and the group hosted a special evening of public performances and readings, celebrating the culmination of the project.

A Plaque for Oscar Wilde at Clapham Junction 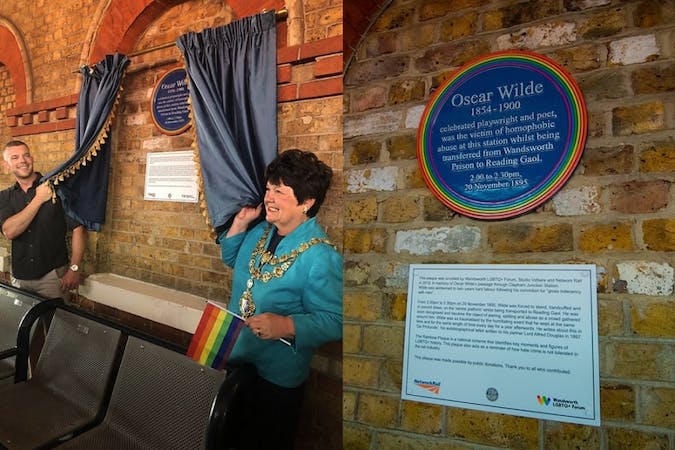 During The Oscar Wilde Temple, Wandsworth LGBTQ+ Forum and Studio Voltaire collaborated on a campaign to produce a permanent plaque in memory of Oscar Wilde’s passage through Clapham Junction Station.

Wilde was sentenced to two–years hard labour following his conviction for “gross indecency with men”. From 2.00pm to 2.30pm on 20 November 1895, Wilde was forced to stand, handcuffed and in convict dress, on the ‘centre platform’ at Clapham Junction station whilst being transported to Reading Gaol. He was soon recognised and became the object of jeering, spitting and abuse as a crowd gathered around him. Wilde was so traumatised by the humiliating event that he wept at the same time and for the same length of time every day for a year afterwards. He writes about this in ‘De Profundis’, his autobiographical letter written to his partner Lord Alfred Douglas in 1897.

A rainbow plaque was unveiled by Wandsworth LGBTQ+ Forum, Studio Voltaire and Network Rail in July 2019 and can be found on Platform 10. With thanks to Leander Architectural, Russell Tovey, the Mayor of Wandsworth Jane Cooper, The Oscar Wilde Society and all of those who made it possible through generous public donations.