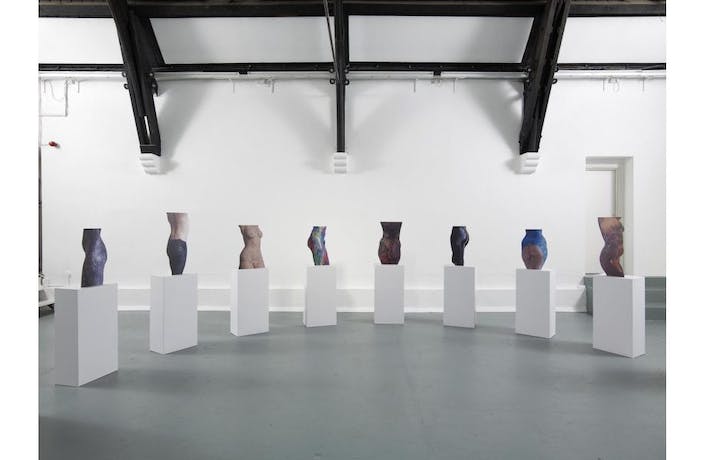 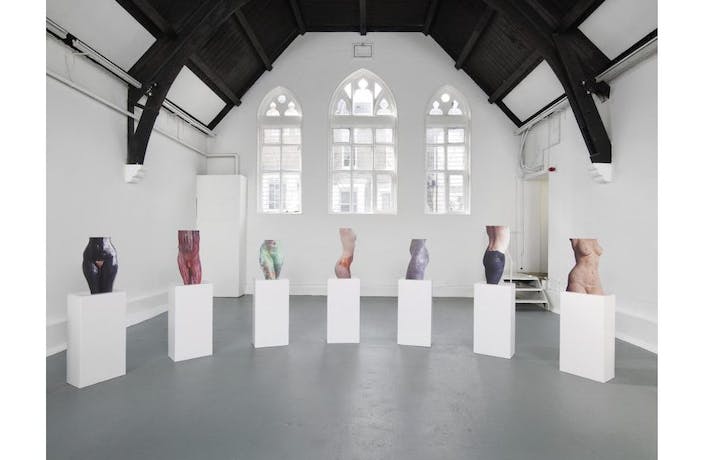 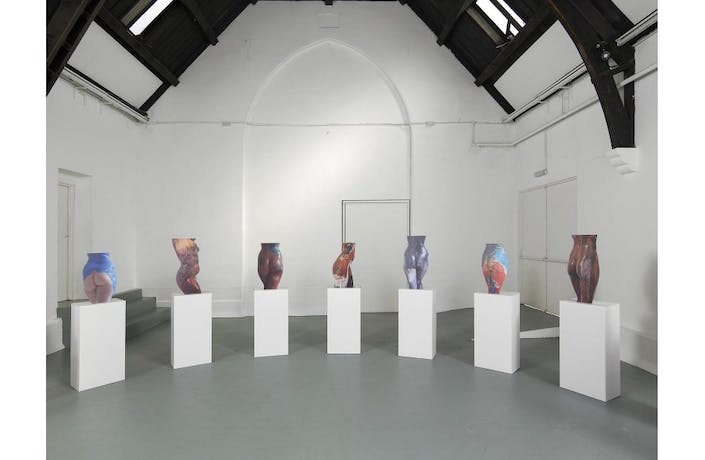 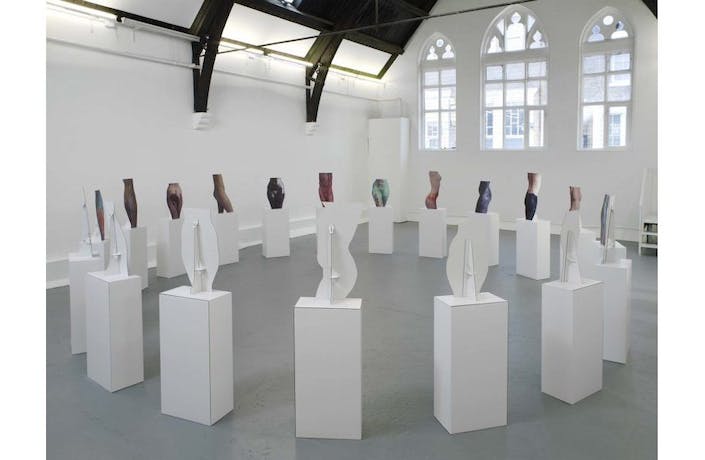 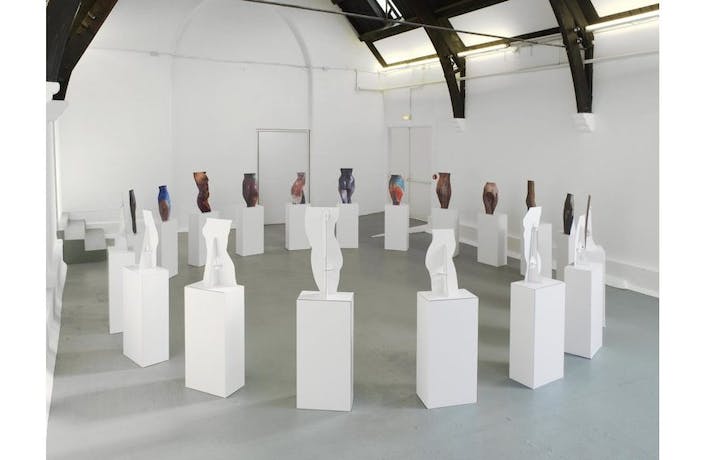 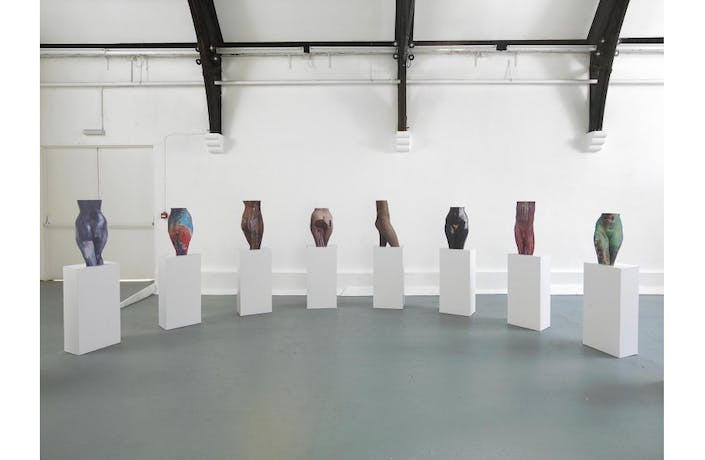 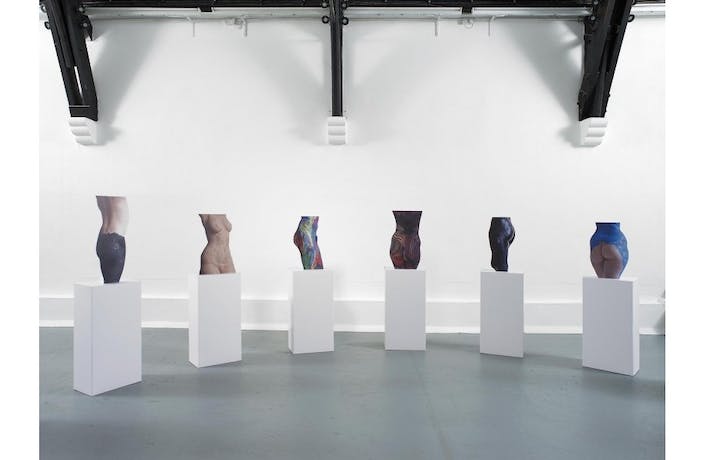 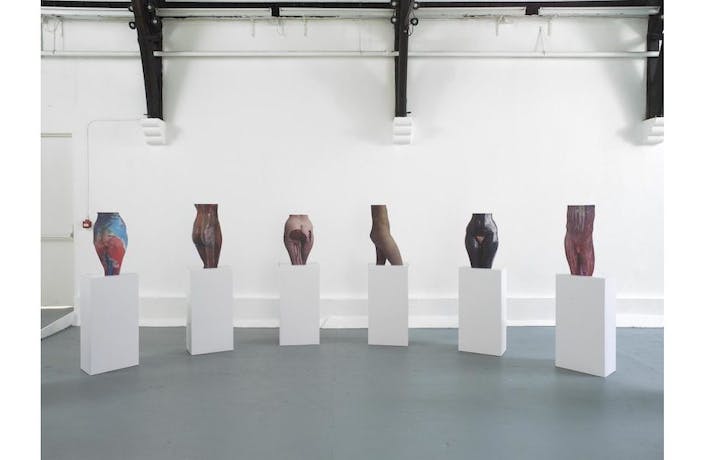 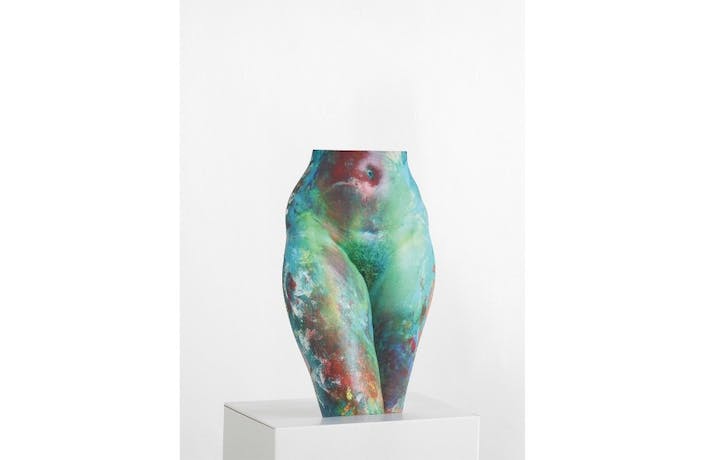 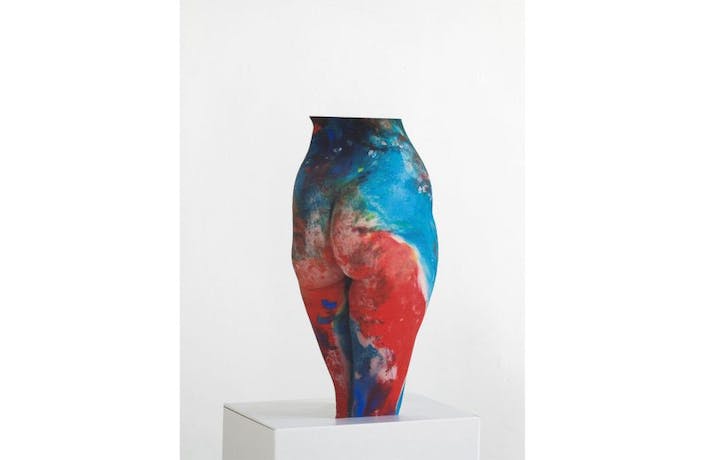 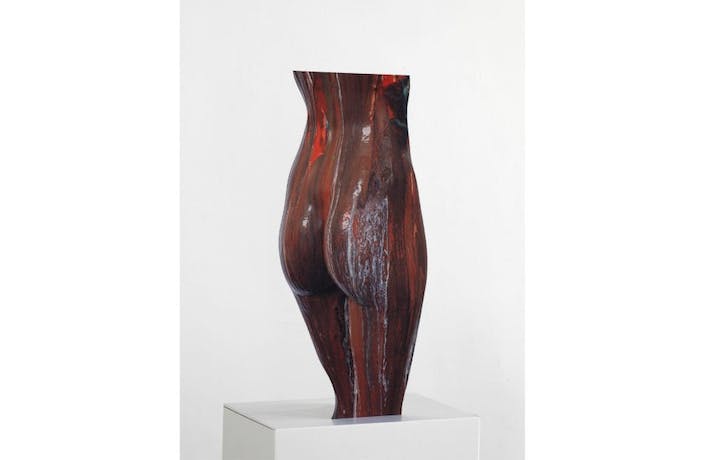 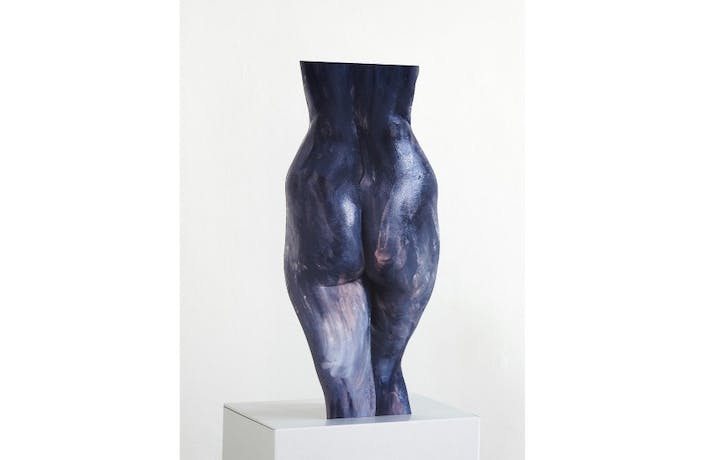 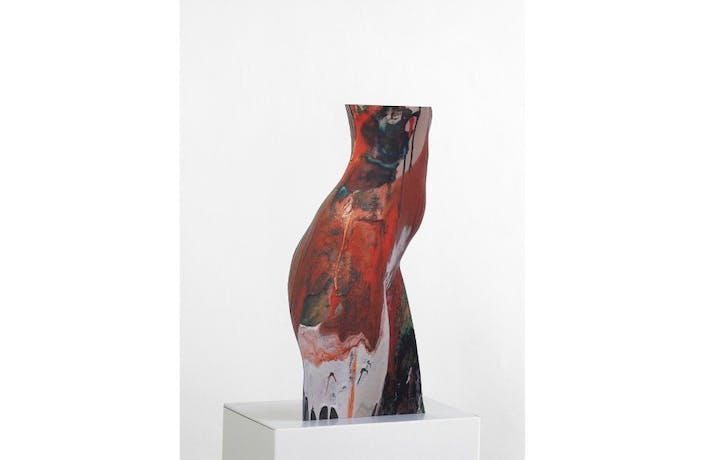 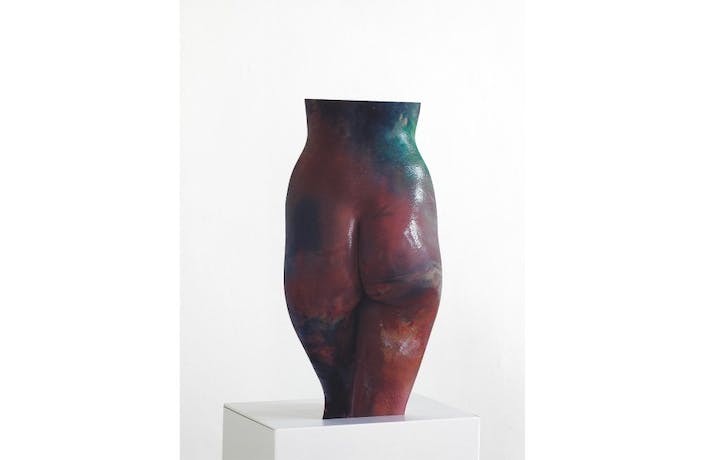 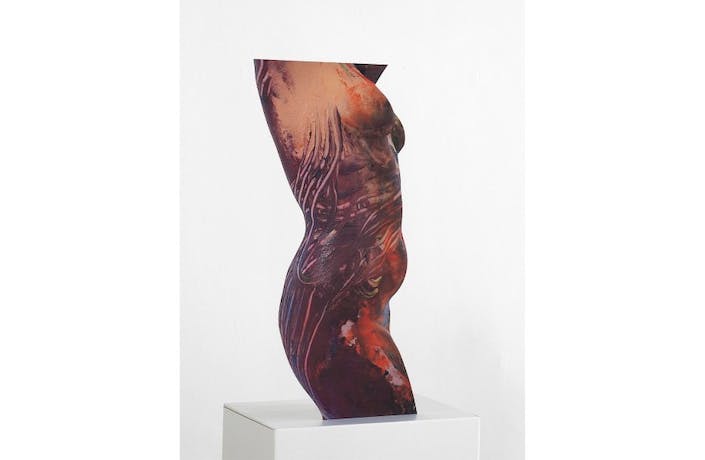 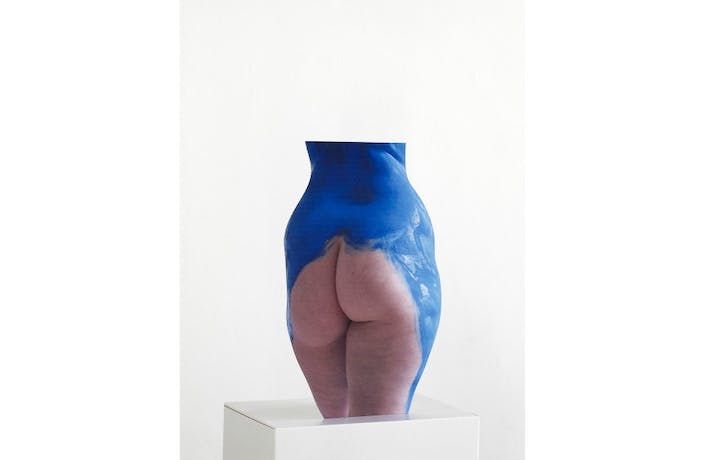 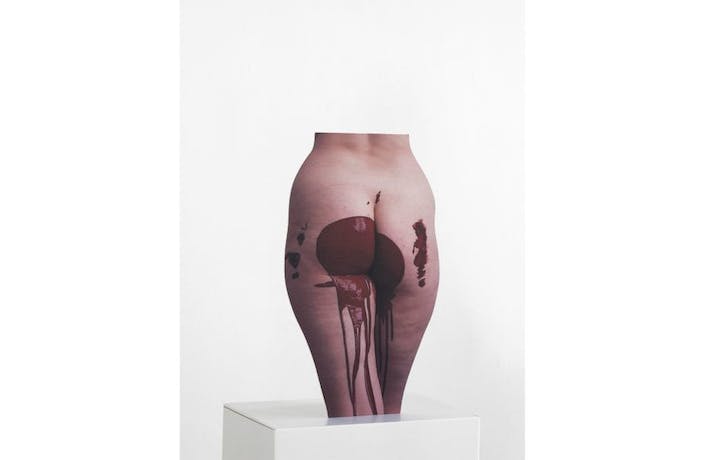 A new large-scale commission by the Scottish artist Keith Farquhar, his first solo presentation in a public gallery in London.

More Nudes in Colour presents an ongoing series of works which mark an exciting development in the artist’s practice. Each new piece begins with paint spontaneously applied to a naked model. The results are then photographed, producing images that recall the nudes of classical antiquity. The painted skin often emulates marble, wood-grain or other organic materials that figure in traditional sculpture. The images are then fabricated as life-sized cardboard cut-outs–similar to those found in cinemas promoting the current releases–and are then exhibited on custom-made plinths of the same material. Farquhar refers to the finished works as ‘flat-pack statues’.

Production starts in Farquhar’s studio with an improvised series of actions, echoing 1970’s performance practices that forefront the body as a site of engagement. Referencing both Yves Klein and Jackson Pollock in his painterliness, Farquhar’s work also suggests hippy body painting and the coffee-table erotica of Charles Gatewood’s Messy Girls! and Richard Kern’s New York Girls. Those familiar with Farquhar’s work will notice his trademark economy – multiple, disparate references are compounded into one unified, elegant solution. With More Nudes in Colour, the distillation process is intensified yet further within the ‘flat-pack’: what begins with a physical, messy and chance-filled endeavor finishes with a series of concise, dematerialised works that can literally fold away to almost nothing.

The project was made in partnership with two galleries: Tramway, Glasgow and Focal Point Gallery, Southend-on-Sea. As the second part of the project, the artist will make a new offsite commission for Focal Point Gallery that will in some ways be context specific to Southend. This will open in Spring 2011. The exhibition at Studio Voltaire will subsequently tour to Tramway, Glasgow in 2011.

In partnership with Focal Point Gallery, Southend-on-Sea and Tramway, Glasgow.

Supported by The Hope Scott Trust and Hugo Brow.